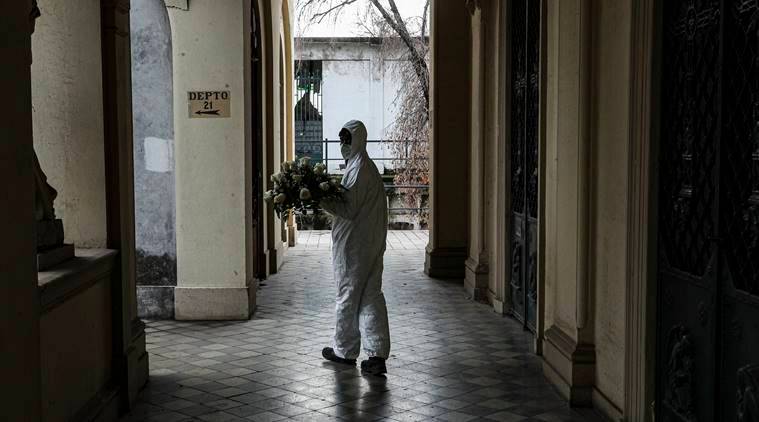 A worker carries flowers to the funeral of Rodrigo Herrera who died from COVID-19 complications, at a Catholic cemetery in Santiago, Chile, Tuesday, June 30, 2020. Herrera’s family could not attend the funeral because they were infected with COVID-19. (AP Photo/Esteban Felix)

Coronavirus Global Updates: The coronavirus has infected nearly 11.8 million people worldwide and killed over 500,000. The United States has the most number of infections, over three million, followed by Brazil (1.6 million), India (700,000) and Russia (600,000)

The World Health Organization (WHO) Wednesday warned that a spike in global deaths could be expected given the surge in cases over the last week. Dr Michael Ryan, emergencies chief of the WHO, said there was often a lag between the time it took for deaths to be reported after a increase in cases, as it takes time for the virus to run its course in patients. He also said the rise in cases was not due to widespread testing, but because the epidemic was “accelerating”.

The US notifies UN on decision to withdraw from WHO

The US Tuesday formally notified the United Nations of its decision to terminate its relationship with the WHO. The Trump administration had accused the global health body of failing to contain the outbreak after it surfaced in China. The country is now expected to withdraw from the organisation on July 6, 2021.

The US now has more than 3 million Covid cases

In a new milestone, the country crossed the three million mark amid an upswing in cases in several states. California and Texas reported over 10,000 cases on Tuesday.

Meanwhile, health official Dr Anthony Fauci warned it was a “false narrative to take comfort in a lower rate of death.” President Trump has been saying the US was “doing so well” as it has the “lowest Fatality (Mortality) Rate in the world”.

“By allowing yourself to get infected because of risky behavior, you are part of the propagation of the outbreak,” he was quoted as saying by The New York Times. “There are so many other things that are very dangerous and bad about this virus. Don’t get yourself into false complacency.”

Lending by Japan’s banks rose 6.2 per cent in June to 570.1 trillion yen ($5.3 trillion) — the fastest annual pace on record — as companies hoarded cash to negate the impact of the pandemic. At the same time, deposits in financial institutions rose 8.0 per cent to an all-time high of 786.1 trillion yen ($7.3 trillion) as citizens saved the money disbursed by the government due to Covid.

The government Wednesday reiterated it would not declare a state of emergency to contain the pandemic, despite the rising cases in the country. Japanese Economy Minister Yasutoshi Nishimura said the healthcare system was equipped to deal with the cases.

A support worker comforts a young child after he was separated from his mother outside a public housing tower, locked down in response to an outbreak of the coronavirus disease (COVID-19), in Melbourne, Australia, July 8, 2020. (Reuters Photo/Sandra Sanders)
Brazil’s Bolsonaro tests positive for coronavirus

Brazil’s President Jair Bolsonaro tested positive for the coronavirus on Tuesday, among the tallest political figure in the world to contract the disease. Bolsonaro has repeatedly downplayed the impact of the virus despite Brazil’s high Covid figures. In fact, he was reportedly standing inches away from reporters when he announced he had the disease. During a press conference he held outside his official residence, Bolsonaro said he was experiencing only mild symptoms as he had been taking hydroxychloroquine — an unproven treatment.

“If it weren’t for the test, I wouldn’t know the result. And it turned out positive,” he reportedly said. “You can see from my face that I’m well and I’m calm.”

Students leave school after finishing the first day of China’s national college entrance examinations, known as the gaokao, in Beijing, Tuesday, July 7, 2020. China’s college entrance exams began in Beijing on Tuesday after being delayed by a month due to the coronavirus outbreak. (AP Photo/Andy Wong)
Colombia extends lockdown till August 1

Colombia has extended its national lockdown by two weeks till August 1 to contain the spread of the virus. President Ivan Duque, in a televised address, said: “After analysing the country, and considering we have cities where the rate of cases has accelerated and grown, as well as the mortality rate, we have continued to work on preserving the mandatory preventive isolation as the general concept.”

The United Kingdom is facing a “job crisis”, the Recruitment and Employment Confederation (REC) industry body said. According to a survey it conducted, demand for employment fell at 31.9 per cent in June, up from 19.1 in May. This is the largest in the last decade, the survey sated.

“This is now a jobs crisis,” Neil Carberry, chief executive of the REC, said, reported Reuters. “Rishi Sunak should use today’s Summer Statement to boost job creation, with a cut in National Insurance designed to retain jobs and boost hiring.”

“While there are signs that the worst declines are behind us, today’s figures show that it will be a while yet before we see job placements growing month on month,” Carberry said.

WHO acknowledges ‘evidence emerging’ of airborne spread of Covid

The WHO has acknowledged “evidence emerging” of the airborne spread of the coronavirus. “We have been talking about the possibility of airborne transmission and aerosol transmission as one of the modes of transmission of COVID-19,” Maria Van Kerkhove, the technical lead on the pandemic at the WHO, said.

Nearly 240 scientists had written to the global organisation with research that airborne transmission was possible. They had “outlined the evidence showing that smaller particles can infect people, and are calling for the agency to revise its recommendation”.

(With inputs from agencies)