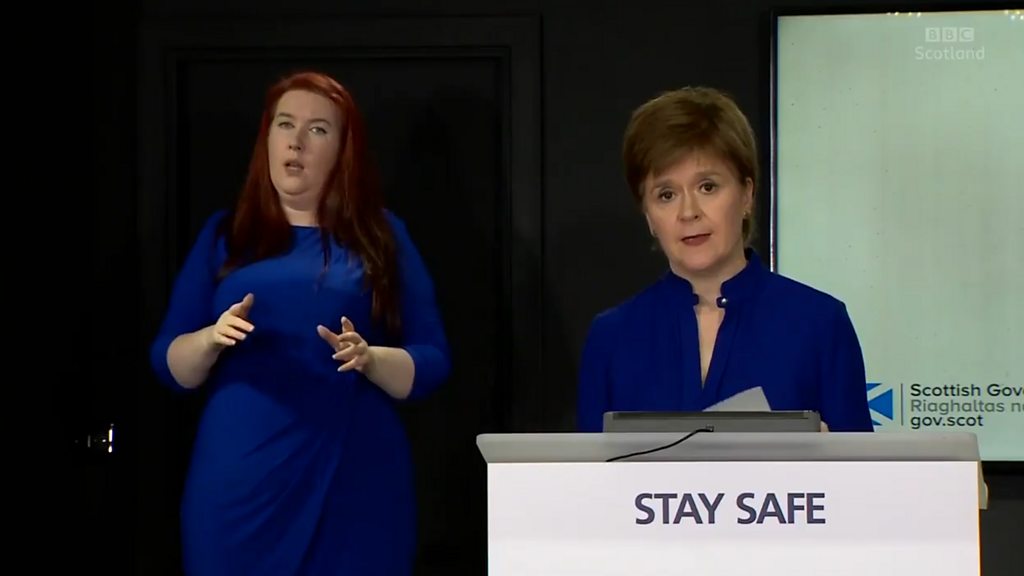 People travelling to and from Spain will still have to go into quarantine when arriving in Scotland, Nicola Sturgeon has announced.

The Scottish government has approved almost all of the “air bridge” travel destinations set out by UK ministers.

This means that from 10 July, Scots can travel to 57 other countries without having to self-isolate on returning.

However, Spain and Serbia have been omitted from the list due to concerns about the prevalence of Covid-19.

The first minister said this was a “very difficult decision” to make, but that it was needed to “protect Scotland as far as possible from a resurgence of this virus in the weeks ahead”.

And she warned that people should not seek to “get around” the restrictions by travelling via English airports, insisting that the rules “are here for a reason”.

Where can I take a foreign holiday this summer?

The UK government had set out a list of 59 countries around the world which it said now pose a “reduced risk” from coronavirus, and which would no longer be subject to quarantine rules.

These include most countries in Europe, island nations in the Caribbean and countries further east – including Vietnam, Japan, South Korea, Hong Kong, Australia and New Zealand.

Scottish ministers – who have the final say on public health arrangements north of the border – have now approved this list, but with two exceptions.

Ms Sturgeon said the lower prevalence of the virus in Scotland meant its position was “a bit different to that of the UK as a whole”.

And she said that “we cannot in good conscience lift restrictions” for people arriving from Spain or Serbia.

The first minister said this was “the best balance we can arrive at”, and said she hoped the situation could be updated in the near future.

The move means anyone entering Scotland from Spain or Serbia will have to go into self-isolation even if they travel via an English airport.

Spot-checks are conducted on people who are meant to be in quarantine, and fines can be levied if it is found they are not.

‘No need for quarantine’

David Curran from Glasgow has an apartment in Majorca which he has not visited since October last year.

He and his family have flights to the Spanish island on 21 July – and is confident they will go through with their plans – but says he believes there is “no need” for a quarantine.

“Nicola Sturgeon is getting information from scientists, but personally I think she’s trying to turn it into a Scotland-England thing,” he said.

“I’m still optimistic it’ll be dropped by the time we come back, but it’s as if she just wants people to have holidays in Scotland this year.

“But as she was saying that, my window wipers couldn’t keep up with the rain – the majority of people in Scotland don’t want to go on holiday in Scotland.”

The Scottish government has targeted the effective elimination of coronavirus north of the border, and Ms Sturgeon said the importation of new cases from abroad was “one of our biggest risk factors”.

She said it was estimated that for every 100,000 people in Scotland, 28 currently have coronavirus. She said this compared to 128 across the UK as a whole, and about 330 in Spain – a “significantly higher prevalence” of the virus.

She said ministers had taken a “very difficult decision” to omit Spain and Serbia from the list, and that the move was “evidence-driven and motivated only by a desire to protect Scotland as far as possible”.

Figures from VisitScotland suggest Spain is Scotland’s fifth largest market in terms of tourism visitors, with 205,000 visits recorded in 2018.

The first minister said she knew Scots loved travelling to Spain and that Scottish businesses welcomed many Spanish tourists, adding that the position could change “possibly very soon”.

Ms Sturgeon also urged Scots to have a “staycation” this summer rather than going on holiday abroad.

“Remember that this is about trying to stop people getting a deadly and damaging virus and trying to minimise as far as possible any further loss of life,” she said.

Where can I go without quarantining on return?

From Friday, travellers are exempt from quarantine rules when they arrive in Scotland from:

Don't Miss it US doctors receiving death threats as coronavirus issue turns political | The Drum
Up Next New modelling shows COVID-19 transmission under control, but risk of outbreaks remain high