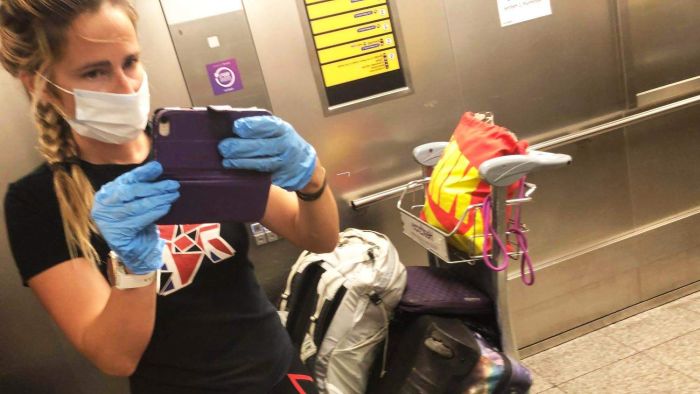 More than 250,000 international travellers have touched down in Australia since the borders were closed amid the coronavirus pandemic, new figures obtained by the ABC show.

Key points:About 500 people a day still arrive at Brisbane International AirportDaily arrivals to Brisbane have fallen by 97 per centMore than 200,000 people have arrived in Australia from overseas since March 21

The Department of Foreign Affairs and Trade (DFAT) said more than 357,000 Australian citizens and permanent residents had returned to Australia since the beginning of March.

DFAT has also helped more than 26,000 Australian citizens and permanent residents to return on more than 315 flights, 63 of which were directly facilitated by the Federal Government.

The Australian Border Force (ABF) said between March 21 and June 30 more than 212,000 passengers had arrived from overseas, as it continued to ban foreign nationals who did not meet travel exemptions from entering the country.

Hundreds arrive at Brisbane International Airport each day, but arrivals are down by 97 per cent.(Instagram: @dshieldlawrence)Why are these people still travelling?

Many of them are Australian citizens.

Queensland high school teacher Allana Landolfo had been living and working in London, and trying to get home.

“I thought I’d kind of wait and see if things would get better, which we all thought were going to in a month or so,” she said.

Coronavirus live news: Follow all the latest information in our blog.

Ms Landolfo said with cases of COVID-19 continuing to rise overseas she was shocked when a recent search for a flight back to Australia came up with no results.

“That was pretty confronting — I think we always travel knowing that we can always come home, and in a situation like this, it wasn’t actually the case,” Ms Landolfo said.

Ms Landolfo has since paid three times the regular price for a return flight from London and remains on the tail-end of her 14-day-quarantine at a Brisbane hotel.

“I think it’s probably fair to say for a lot of them they thought they would wait out and see what happens with the COVID environment,” Mr Parashos said.

At the moment, about four international flights, each with about 160 passengers, arrive into Brisbane International Airport each day.

That is 97 per cent below the average daily number of international travellers passing through the terminal before the pandemic.

Mr Parashos said many of the passenger planes had 13 per cent of seats occupied and the excess space was used for medical supplies.

“While they’re aircraft with seats, quite often there’s not many passengers on there,” he said.

The top five countries for returning Australian citizens are: Qatar, the United States, New Zealand, the United Kingdom and Indonesia.

Brittany Mason is now halfway through her quarantine at a Perth hotel after living and working for 12 months in Amsterdam.

“I was definitely preparing myself for potential flight cancellations or diversions but I’m super lucky that it was all very smooth,” she said.

The Brisbane International Terminal is empty as the coronavirus lockdown suspends most overseas travel.(ABC News: George Roberts)What about passengers going the other way?

That is when things become a little more difficult.

Backpacker Grace Hoyle is stuck waiting at the Brisbane International Airport terminal, hoping to catch a flight home to Yorkshire in the UK.

“I’ve been in Bundaberg trying to find farm work, but there’s not really a lot of it at the minute,” she said.

She had hoped to stay in Australia for two years, but had not been able to find enough work.

“I’m just heading home before I end up running out of money altogether so that I can’t support myself here, so it’s just really the best option at the minute,” Ms Hoyle said.

While Ms Hoyle had been forced to pay a premium for a one-way ticket home, Australian man Tom Miranda remains stranded in Queensland, separated from his wife who is expecting their third child.

“Four months away from my family and I wanted to spend some time with them before the third addition arrives,” Mr Miranda said.

He is a New Zealand resident but was denied entry through immigration when he tried to check in for his flight home from Brisbane on Tuesday afternoon.

“I’ve put in my applications for my visas so before — being an Australian citizen — didn’t need to apply for a visa, but now I need to,” he said.

“I’ve just got to jump through the hoops for New Zealand immigration and figure out the flight process.”

Wayne Crook (left) remains in Hong Kong, separated from the rest of his family.(Supplied)

Authorities have told the ABC the number of Australians wanting to return home at any time will be influenced by a number of factors, in particular the impact COVID-19 has had on their country of residence.

Wayne Crook has been living and working in Hong Kong for 25 years and remains separated from his family, who recently returned to Australia.

“I used to be able to just fly in and out of Australia and that is now impossible, so it’s bringing some separation anxiety between our family,” he said.

Mr Cook hopes to return home next month, although was yet to book a flight given the situation in Victoria where his family is based.

Mr Miranda’s wife is pregnant with their third daughter, who is due next month.(ABC News: George Roberts)

Don't Miss it Coronavirus: Seven things to watch out for in Sunak’s stimulus statement | Business News
Up Next As COVID-19 makes a comeback, so will lockdowns