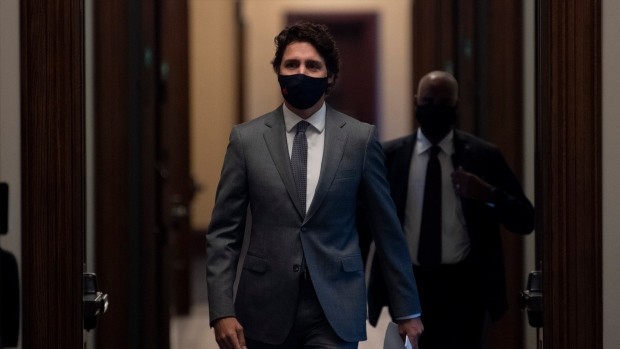 OTTAWA —
One of Canada’s top doctors says modelling shows the transmission of the coronavirus is under control across the country, yet relaxation of public health protocols could lead to severe outbreaks.

Deputy Chief Public Health Officer Dr. Howard Njoo says data points to a steady decrease in both the number and severity of COVID-19 cases since the peak of the pandemic in Canada in late April.

One of the key indicators, Njoo says, is the “effective reproductive number” or the “RT” as it’s more commonly called.

“In order for the epidemic to die out, RT needs to remain consistently below one, meaning on average, each new case infects less than one other person. Nationally, the RT for Canada has been mostly below one for more than 10 weeks,” he told reporters in Ottawa on Wednesday.

Prime Minister Justin Trudeau set the stage for the modelling update during a COVID-19 briefing with reporters. There he reinforced that while overall cases of the coronavirus in Canada are declining some communities remain vulnerable, namely those in long-term care facilities and working on farms.

“The situation is stabilizing in Canada, because Canadians did their part and followed public health instructions but we still have to be very careful, things can change quickly,” Trudeau told reporters on Wednesday.

“We still have some hotspots in some parts of the country, including in long-term care facilities and agriculture work settings. So as we continue to gradually reopen the economy we have to remain vigilant,” Trudeau said.

York Region Public Health in Ontario is investigating an outbreak at a local mushroom farm after being notified on June 27 of 30 new COVID-19 cases. The majority of recent coronavirus cases in Ontario have been reported in the Greater Toronto Area and on farms with high populations of migrant workers.

The last modelling update delivered on June 29 showed lingering hotspots in Ontario and Quebec. It also highlighted that, while transmission between older groups was on the decline, there had been a slight increase in spread among those aged 20-39 since late May.

A number of provinces have moved to stage three of reopening, meanwhile the establishment of an Atlantic travel bubble permits residents in New Brunswick, Nova Scotia, P.E.I, and Newfoundland and Labrador to travel freely without having to self-isolate or quarantine.

Face masks also became mandatory in a number of Canadian cities on Tuesday. Conservative Leader Andrew Scheer and Manitoba Premier Brian Pallister came under fire after being photographed at the Toronto Pearson airport breaking that rule.

The Canada-U.S. border remains closed as cases south of the border surge past the three million mark.