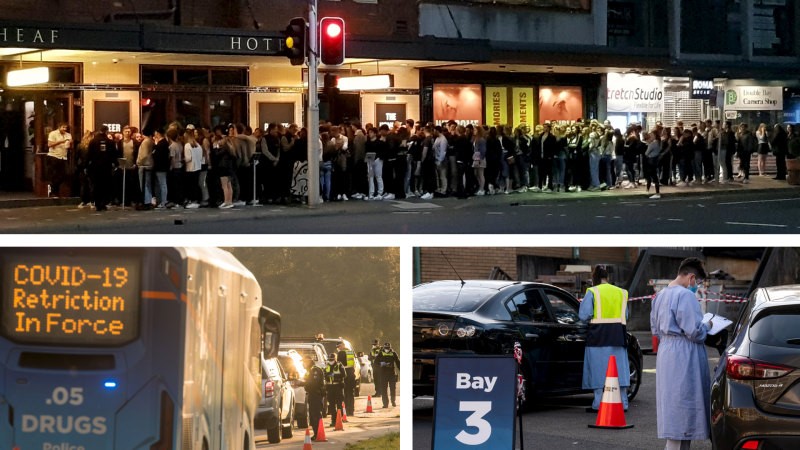 “This action follows legal advice that the orders are open to an incorrect interpretation,” the statement said.

Ms Berejiklian on Thursday said there had been no evidence of community transmission in NSW following Victoria’s outbreak, with 13 new cases of COVID-19 in NSW in the past 24 hours, 11 of whom were returned travellers. The two other new cases were Albury residents, who were identified as probable cases last week, and who were related, one of whom had travelled to Melbourne.

Numbers however surged again in Victoria, with 165 new confirmed cases yesterday, with 135 yet to be traced to a known outbreak. The new cases included staff in two emergency departments at Melbourne hospitals while six more aged-care facilities had to be placed into lockdown after workers tested positive.

Despite the continuing outbreak in Victoria, Ms Berejiklian said there would be no further tightening of the border permit system or changes to restrictions on gatherings in NSW for now.

She said health authorities were monitoring the situation for evidence the virus was “seeding” in NSW communities but she said that would not be known for “a couple of weeks”.

“We just need to confirm in the next few weeks that that level of seeding hasn’t occurred and so far the signs are positive,” she said.

The NSW-Queensland border will reopen for the first time since March on Friday. From noon travellers from every state except Victoria will be able to enter into Queensland with a valid border declaration – carrying a $4000 fine for false information – stating they had not been in the hotspot within the past 14 days. All others will be refused entry with no option to quarantine.

National cabinet will meet on Friday where it will consider a snap review of hotel quarantine arrangements.

Ms Berejiklian said NSW would push for a reduction in the number of overseas travellers returning to Australia. She also softened her previous comments in which she proposed charging NSW residents returning from Victoria for mandatory hotel quarantine.

She said the government would consider charging overseas travellers before those returning domestically.

“Can I say quite stridently, we will be charging overseas returning visitors before we charge NSW residents,” Ms Berejiklian said.

“NSW has done more than double what any other state has. We have welcomed back between 30,000 to 35,000 Aussies going back to their home states, and obviously they have had considerable time to consider their options.”

More than 72,000 international passengers arrived in Australia in the month to July 7, with 39,394 arriving in NSW.

Don't Miss it Coronavirus: When can I go to the gym, nail salon, tattoo studio or pool?
Up Next Teachers weigh risks of COVID-19