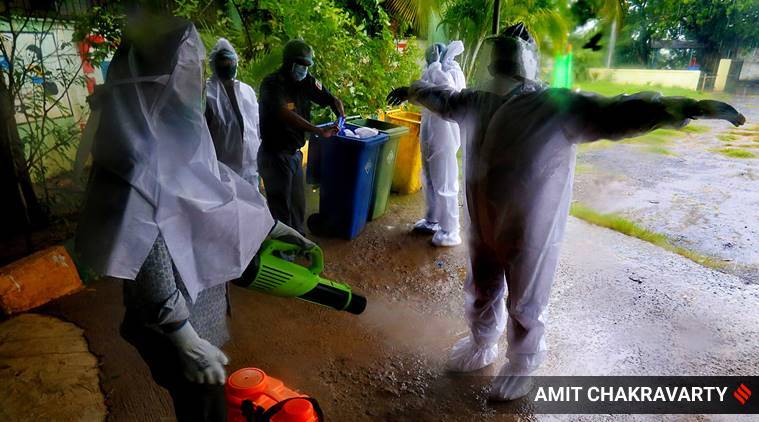 Coronavirus India LIVE Updates: In the brief, the WHO has formally acknowledged the possibility that the novel coronavirus can remain in the air in crowded indoor spaces

The World Health Organisation (WHO) on Thursday (July 9) published an updated version of its March 29 scientific brief, ‘Modes of transmission of virus causing COVID-19: implications for infection prevention and control (IPC) precaution recommendations’, which it said included “new scientific evidence available on transmission of SARS-CoV-2, the virus that causes Covid-19”.

In the brief, the WHO has formally acknowledged the possibility that the novel coronavirus can remain in the air in crowded indoor spaces, where “short-range aerosol transmission… cannot be ruled out”.

The updated brief has come three days after a group of 239 scientists from 32 countries published a commentary titled ‘It is Time to Address Airborne Transmission of COVID-19’, in which they issued an “appeal to the medical community and to the relevant national and international bodies to recognize the potential for airborne spread of COVID-19”.

While the rapid rise in the novel Coronavirus infections in Karnataka and Telangana has been attracting attention, Odisha has quietly started to show a big surge again. Odisha had first gained prominence around the second week of May when the first batch of returnees from other states, mainly Gujarat, had begun to test positive for the disease in a big way. At that time, it had been one of the fastest growing states in the country. The state had slowed down significantly after that.

But in the last one week, there has been big increase in the numbers reported by Odisha. Close to 4,000 new cases have been discovered in the state during this time, with the state total now touching 12,000. The current growth rate of confirmed cases in Odisha (seven-day compounded daily growth rate) is 5.71 per cent, only behind Karnataka, Telangana, Andhra Pradesh and Assam, and much higher than the national growth rate of 3.45 per cent.

Reliable information is key to tackling any outbreak and nowhere is it more crucial than in the management of the ongoing pandemic, says Ganesan Karthikeyan, a professor of cardiology at the All India Institute of Medical Sciences, New Delhi.

However, the sheer volume and variety of information being made available make it difficult to judge which bits are true and which hyperbole.

“The consequence of all this is impaired judgement, misplaced beliefs and distorted priorities. The run on pharmacies for hydroxychloroquine (triggered by mere speculations) that we witnessed a few weeks ago is a prime example,” writes Karthikeyan.