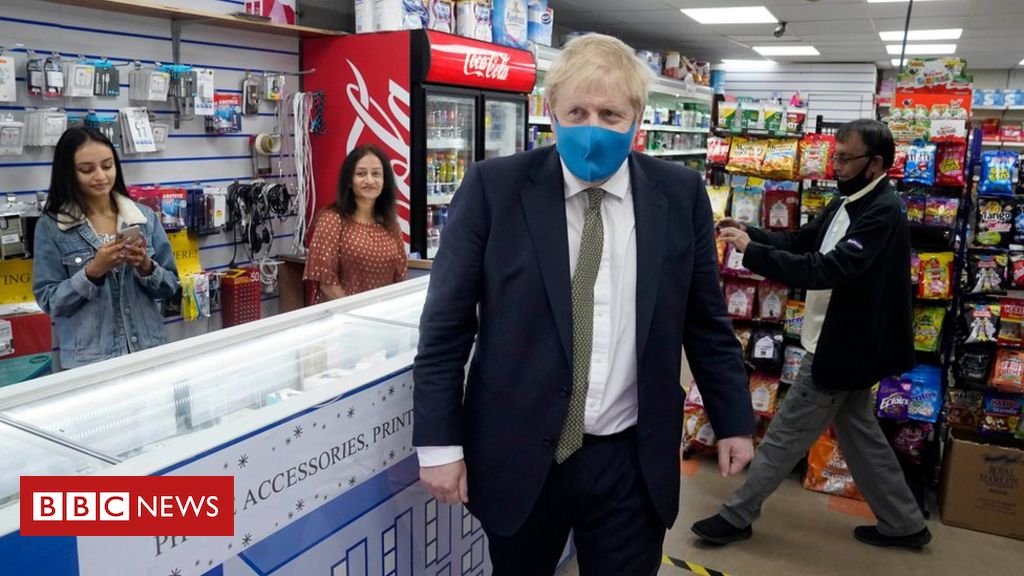 Making face coverings mandatory in shops in England is being considered by the government to slow the spread of coronavirus, senior sources have said.

Speaking in a Facebook Q&A video, Boris Johnson hinted at the change saying: “We are looking at ways of making sure that people really do have face coverings in shops.”

Face coverings have been compulsory in shops in Scotland since 10 July.

Mr Johnson also said “people should be going back to work if they can now.”

Responding to a question about extending the furlough scheme the prime minister said: “I think everybody has sort of taken the ‘stay at home if you can’ – I think we should now say, well, ‘go back to work if you can’.

“I think it’s very important that people should try to lead their lives more normally.”

The UK government was initially hesitant about advising people to wear face coverings, arguing that evidence that they reduce transmission was “weak”.

However, rules compelling people to wear face masks on public transport in England were introduced on 15 June.

And speaking on Friday Mr Johnson said “the balance of scientific opinion seems to have shifted more in favour of them than it was, and we’re very keen to follow that”.

“I don’t think we are going to get to a world where we say everyone has to wear face coverings the whole time everywhere,” he said, but added “We need to be stricter in insisting that people wear face coverings in confined spaces where they are meeting people they don’t usually meet.

“The future for the country has got to be a world where we are managing the virus so effectively with local lockdowns, test and trace that we don’t need ultimately to have some of these social distancing measures.”

The messaging on face masks has evolved, to put it mildly. And Labour’s calling on the government to offer some speedy clarity on the matter.

Of course some will suggest that the position has evolved as the science has evolved. But perhaps something to consider here too; the economy.

Today Boris Johnson urged people to go back to work. He also hinted at a stricter policy on face masks.

Lo and behold he was pictured, out and about at a shop and takeaway, wearing a face mask. It doesn’t take a detective to spot an overarching theme.

Ministers want people to start embracing the new normal; leaving their homes, spending money and helping businesses get back on their feet – but yes with mitigation measures, like masks, in place.

Those mitigations are of course there to help suppress transmission but can also play their part in in helping people feel confident.

Because public confidence is important; you can urge someone to do something but they may well resist unless they feel safe.

Currently people in England are advised to wear a face covering if possible in enclosed public spaces where social distancing is not possible.

Those exempt from wearing face coverings include children under 11, people with disabilities, those with breathing difficulties and anyone travelling with someone who relies on lip reading.

The rules on face covering vary across the nations. In Scotland face coverings are mandatory in shops and on public transport.

People in Wales are being asked to wear non-medical face coverings where social distancing is not possible – including on public transport – but the government in Cardiff stopped short of making their use mandatory.

While in Northern Ireland, plans to make wearing face coverings on public transport compulsory have been put on hold, pending legal clarification.

Is the science on face coverings changing?

Right from the early weeks of the crisis there’s been concern about “silent spreaders” – people who don’t realise they’re infected passing the virus to others.

It was that fear that led the US government and many others, back in April, to recommend that people cover their faces when in crowded indoor spaces.

And since then the evidence has become stronger that in the 24-48 hours before symptoms show, people can be at their most infectious. Many others may never show symptoms at all, as I reported back in May.

So as lockdowns are eased, and there’s more mingling on public transport and in shops, the logic is that a barrier over the mouth and nose – even one that’s homemade – can trap much of the virus that an infected person may release.

According to Prof Sir Venki Ramakrishnan, president of the Royal Society, the UK’s leading science academy, masks help to reopen economies because they make it easier for people to go about their normal lives and “they’re a very small price to pay”.

The World Health Organization says non-medical face coverings should be worn where social distancing is not possible.

Homemade cloth face coverings can help reduce the spread of coronavirus from people who are contagious but have no symptoms or are yet to develop symptoms.

Prof Sir Venki Ramakrishnan expressed concern that the UK is “way behind” other countries in terms of face mask usage.

A recent report by the Royal Society said that as of April 2020, 80% of Italians wore masks, 70% of Americans and 65% of Spaniards. In the UK that figure was just 25% – although it is likely to be higher now.

Prof Ramakrishnan said the government’s guidelines had been inconsistent adding: “What we would like for the government is to be a bit stronger and clearer about the messaging and require it whenever you are in crowded public spaces where you cannot get more than 2m away from the next person.

London Mayor Sadiq Khan has written to Mr Johnson urging him to make face coverings mandatory in public places where it is not possible to keep a safe distance from others.