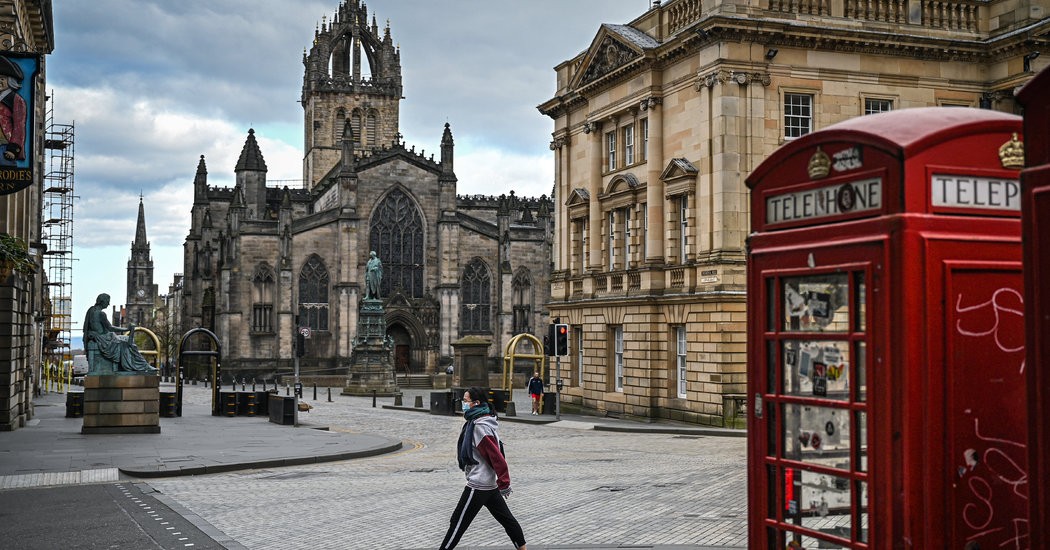 EDINBURGH, Scotland — There was nothing particularly festive about Nicola Sturgeon’s recent visit to the Cold Town House, a newly reopened Edinburgh pub, but maybe that was the point. Sipping coffee and surveying plexiglass dividers, Ms. Sturgeon, the leader of Scotland’s government, warned customers not to expect the jolly, sweaty intimacy of nightlife before the coronavirus pandemic.

“No beer garden or cafe should feel the same as it did before,” she said as a drenching rain fell, obscuring the stony ramparts of Edinburgh Castle that tower above this once-teeming establishment.

As Scotland emerges from a three-month lockdown, it is moving more carefully than neighboring England, a divergence that owes a lot to Ms. Sturgeon’s cautious style and her conviction that England, under its more freewheeling leader, Boris Johnson, is taking too many risks in a headlong rush to resume public life.

For now, Scotland’s approach has made it a bright spot in coronavirus-ravaged Britain. New cases have dwindled to a handful a day, and deaths to a trickle. If Scotland maintains this progress — a big if, given its open border — it could stamp out the epidemic by the fall, public health experts say. Such a goal seems fanciful in England, which is still reporting thousands of new cases and dozens of deaths every day.

But what happens in England inevitably spills over into Scotland. In the case of the virus, the stark contrast in daily numbers has reanimated old grievances for the Scots, who voted against leaving the United Kingdom in 2014 but overwhelmingly rejected Britain’s vote to leave the European Union two years later.

Nationalist sentiment has surged during the pandemic: Fifty-five percent of Scots now favor independence, according to a recent poll — a solid majority that analysts said reflected a perception that Scotland’s nationalist-led government has handled the crisis better than Mr. Johnson and his pro-Brexit ministers have.

Scotland imposed its lockdown on March 23, the same day as England did, but has lifted the restrictions more selectively. It kept pubs closed a few days longer. It requires people to wear face masks in shops, which England does not. And unlike England, it left Spain, a popular holiday destination, off a list of countries to which Scots can travel without isolating themselves when they return.

“We’re quite stubborn and steadfast because Nicola has handled it elegantly and we’ve seen how England is flapping around,” said Katy Koren, the artistic director of Gilded Balloon, a company that stages outdoor performances during the Edinburgh Festival, which has been canceled this summer.

So far, she said, Scots have given Ms. Sturgeon, 49, the benefit of the doubt because she has been willing to make tough decisions and has convinced people that her overriding goal is the public health. Her no-nonsense briefings have become a reassuring daily ritual, even providing grist for comedians.

Ms. Sturgeon’s fans liken her to New Zealand’s prime minister, Jacinda Ardern, who has come closer than perhaps any other leader to stamping out the virus. The unspoken contrast is to Mr. Johnson, who has been all over the map in his response and has often seemed reluctant to deliver bad news.

“Men like to be popular,” said Ms. Koren’s mother, Karen, who runs the festival company with her daughter. “For women, it’s not about ego.”

But it is, inescapably, about politics.

Ms. Sturgeon’s Scottish National Party is committed to independence and a return to the European Union. As she has diverged from the British government — a process that broke into the open in late May when she stuck with the slogan “Stay Home” and rejected Mr. Johnson’s more permissive “Stay Alert” — she is building a powerful new case for Scotland’s ability to go it alone.

Under the terms of limited self-government in the United Kingdom, the Scottish authorities are responsible for matters like health and education, while the British government handles immigration, foreign policy and, crucially, the fiscal rescue packages to protect those who lost their jobs in the lockdown.

That has enabled Ms. Sturgeon to slow-walk Mr. Johnson’s steps to ease the lockdown, which she complains are often foisted on her without advance notice. She clucked over pictures of revelers jamming the streets of Soho in London after he opened pubs — a spectacle that she avoided by scheduling Scotland’s reopening for a Monday rather than a Saturday.

To some, particularly those who do not share her nationalist politics or are eager to get their businesses running again, there is more than a whiff of point-scoring.

“She is a fantastic politician,” said Nic Wood, the owner of the Cold Town House, who invited her to visit his pub. “But a lot of what she now does is all about getting independence. Her talents would be better used if she could just lead the country.”

Hotel and restaurant owners were alarmed when Ms. Sturgeon declined to rule out a quarantine for visitors from England after Mr. Johnson lifted a 14-day quarantine for people traveling to and from 59 countries. She expressed concern that visitors could carry the virus into Scotland from third countries.

“We can’t afford any inference that the English aren’t welcome in Scotland,” said Marc Crothall, the chief executive of the Scottish Tourism Alliance, who noted that 70 percent of Scotland’s tourism revenue comes from visitors within the United Kingdom.

Ms. Sturgeon’s threat also provoked Mr. Johnson, who typically says the differences between Scotland and England are overblown. He described it as “astonishing” and claimed, “There is no such thing as a border between England and Scotland.”

Over the last three months, Ms. Sturgeon, who declined a request for an interview for this article, has developed strong ideas about how to combat the pandemic. She convened a group of scientific advisers separate from the British government’s panel, and they consulted a German health official for best practices.

Scotland honed its test-and-protect program, which is less dependent on private contractors than the system in England and recruits its contact tracers from communities — all of which, officials say, make it more effective.

“We’ve been really pleased to see the case numbers fall the way they have,” said Dr. Janet Stevenson, who coordinates the program for the Edinburgh region, though she acknowledged that it will be harder to control cases as more outsiders start flowing into Scotland from England. “It’s a leaky old border,” she said.

Devi Sridhar, who runs the global health governance program at the University of Edinburgh, noted that the two countries took radically different approaches from the start: England’s priority was to prevent its hospitals from being overrun, while Scotland’s was to drive cases down to zero. If not for imported cases from the south, Dr. Sridhar said, Scotland could come close to that goal by the end of the summer.

“If we were an island, we could eliminate it entirely,” she said. “That’s why cooperation is needed in global health.”

Other experts say elimination is a quixotic target under any circumstances. To achieve it, Scotland would have to keep in place measures that are economically untenable and would cause other health-related problems. Even New Zealand has been struck with new cases — imported from England, as it happens.

Some also question whether Scotland’s performance is all that remarkable compared with Europe as a whole.

Its reported death rate of 46 per 100,000 is far lower than the 71 per 100,000 in England. But it is on a par with France and higher than Northern Ireland. England has 56 million people, compared with Scotland’s 5.4 million. It is sparsely populated, without a metropolis like London, where the outbreak exploded in early March. Fortunate timing may have spared it the worst.

“Scotland was six or seven days behind London,” said Mark Woolhouse, a professor of epidemiology at the University of Edinburgh. “That is a very long time, if the epidemic is doubling every three or four days.” Scotland’s experience, he added, was not “particularly better or worse than other European countries.”

For many in Scotland, however, what matters is not how their country fared relative to the rest of the world, but how it stacks up to England. Ms. Sturgeon’s approval ratings have risen to above 80 percent, while Mr. Johnson’s ratings have declined. That could embolden her to press him to allow another independence referendum — something he has so far ruled out.

“They might still say no,” said Nicola McEwen, a professor of politics at the University of Edinburgh. “But it will be more difficult. She is emerging from this, at least so far, with more authority and more respect.”

At the Cold Town House, where a handful of customers sipped pints on a chilly day earlier this week, there was a stoic pride in Scotland’s disciplined response to the pandemic. The cobbled streets of Edinburgh’s Royal Mile, which usually throb with festival goers at this time of the year, were nearly deserted. From the castle’s ghostly ramparts, residents contemplated their becalmed city.

“There’s a conservatism in Scotland, where doing the sensible, rational stuff outweighs the more emotional response to things,” said Tom Harries, an entrepreneur who is originally from Bristol, England, and runs a start-up that has helped businesses find ways to survive during the lockdown.

There is also, he said, one-upmanship.

“As an Englishman, I myself am thinking, ‘What a mess,’” he said. “How does this reflect on England? It feels a bit shameful.”