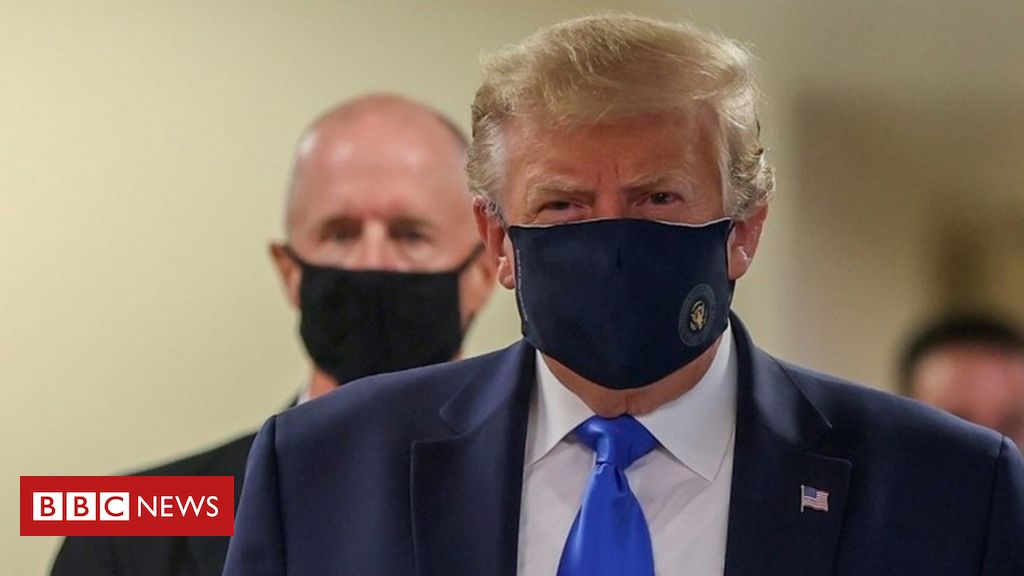 “I think it’s a great thing to wear a mask,” the president said

US President Donald Trump has worn a mask in public for the first time since the start of the coronavirus pandemic.

The president was visiting the Walter Reed military hospital outside Washington, where he met wounded soldiers and health care workers.

“I’ve never been against masks but I do believe they have a time and a place,” he said as he left the White House.

He has previously said that he would not wear a mask and mocked Democratic rival Joe Biden for doing so.

But on Saturday he said: “I think when you’re in a hospital, especially in that particular setting, where you’re talking to a lot of soldiers and people that, in some cases, just got off the operating tables, I think it’s a great thing to wear a mask.”

‘I’m all for masks,’ says Trump in change of tone

He added that he “sort of liked” how he looked with one on, likening himself to the Lone Ranger, a fictional masked hero who with his Native American friend, Tonto, fought outlaws in the American Old West.

Why we should all be wearing face masks

But when the US Centers for Disease Control (CDC) in April began recommending people wear masks or cloth coverings in public to help stop the spread of the virus, Mr Trump told reporters he would not follow the practice.

“I don’t think I’m going to be doing it,” he said back then. “Wearing a face mask as I greet presidents, prime ministers, dictators, kings, queens – I just don’t see it.”

Some media reports have suggested aides have repeatedly asked the president to wear one in public.

Media caption’They want to throw God’s wonderful breathing system out’
What’s the current situation in the US?

The US has seen another 66,528 infections in the past 24 hours, a record for one day, and a total of almost 135,000 deaths since the pandemic began, according to Johns Hopkins University data.

Louisiana has become the latest state to order that masks be worn in public.

Democratic Governor John Bel Edwards also ordered the closure of bars across Louisiana, and tightened restrictions on restaurants, which will no longer be able to serve customers inside. The measures come into effect on Monday.

State Republican lawmakers are expected to oppose the move.

Neighbouring Texas has recorded another rise of coronavirus infections, with a record 10,500 new cases recorded on Saturday.

The governor of South Carolina has issued an order banning sales of alcohol after 23:00 in bars and restaurants to try to stop the spread of the virus.

A court in Indiana has halted the execution of a convicted killer as the victim’s relatives said they were worried about travelling during the pandemic to watch him die. Daniel Lee was set to be executed on Monday in what would have been the first federal execution in 17 years.