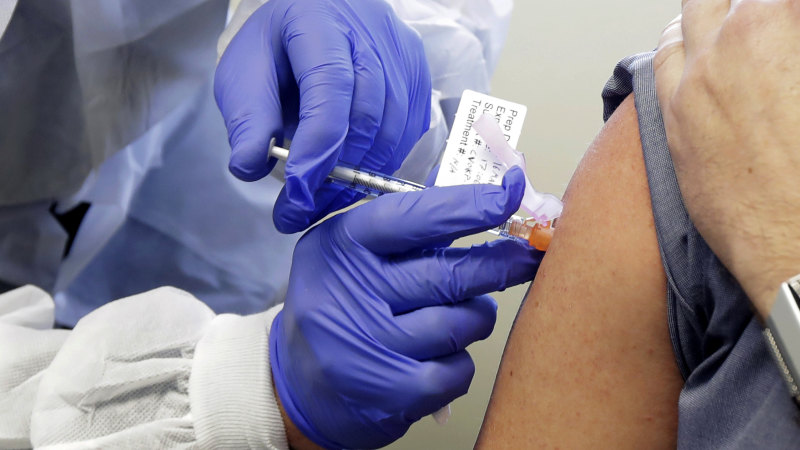 It has what Professor Belz calls a “nice big spike protein”, which makes it a perfect target for vaccines.

The university’s “molecular clamp” vaccine will be given to volunteers to test its safety and whether it can raise protective antibodies, after it showed promise in animal studies.

Professor Paul Young, co-leader of the university’s vaccine team, said: “Like every vaccine trial, this may or may not succeed, it’s not a guarantee, but we’re confident we’ll get a positive outcome.”

Molecular clamp technology works by holding the virus’ spike protein in the right shape for the human immune system to develop immunity.

The technology is untested and has never been used to develop a working vaccine.

Professor Nikolai Petrovsky, founder of Vaxine – an Australian biotech competing to develop its own vaccine – said: “Fancy engineering does not always translate to better vaccines.”

He said molecular clamp technology was based on “work [the university has] done with MERS, which is a completely different virus to COVID-19. Whereas our work is done on SARS, which is 85 per cent genetically identical to COVID-19.”

Vaxine’s jab went into human trials two weeks ago and 32 people have already been given a dose. Professor Petrovsky is a controversial scientist, but a serious one. He claims COVID-19 may have been developed in a lab – a suggestion many scientists dismiss as a conspiracy theory.

University of Sydney head of infectious diseases Professor James Triccas says Professor Petrovsky’s “research is excellent and I think his vaccine is probably one of the more promising”.

Professor Dale Godfrey, head of immunology at the Doherty Institute in Melbourne, sums up worldwide efforts to develop a vaccine.

“How are we going? Two words: incredibly well. So far, the results of clinical trials have been encouraging: good, strong immune responses,” he said.

Vaccines using a range of different technologies have been almost equally promising.

That meant the ones to watch were those using mRNA, a simple technology that could quickly be mass-produced, Professor Godfrey said.

American biotech Moderna’s mRNA vaccine leads that field. It plans to launch a 30,000-person phase three clinical trial – designed to provide evidence of whether the vaccine works – this month.

Research efforts faced an additional layer of complexity on Monday when two new studies provided some of the strongest evidence yet that natural immunity to COVID-19 can wane.

One paper published in Nature Medicine by a team from the Doherty Institute showed some people develop very low antibody levels after infection, “which wouldn’t be great news from an immune durability standpoint”, said the study’s lead author Dr Jennifer Juno.

A separate study from a team at King’s College London – which has yet to be peer-reviewed – found the antibodies of some people with extremely mild infections fall to undetectable levels a month after infection.

“That does seem to be a bit of a thing with coronaviruses. That’s one worry,” Professor Godfrey said.

Stuart Layt covers health, science and technology for the Brisbane Times. He was formerly the Queensland political reporter for AAP.

Don't Miss it Spain on the brink of more lockdowns as coronavirus cases continue to rise
Up Next Getting Covid-19 twice: Why I think my patient was reinfected