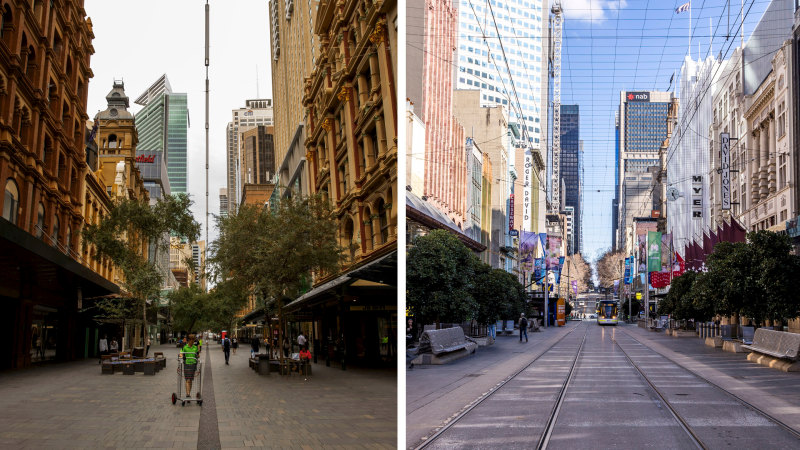 Once NSW restrictions began easing in early May with two adults allowed to visit homes, “social trips” increased by close to 70 per cent as Sydneysiders began moving between household gatherings, the Uber data shows.

By the first week of June, trips to King Street in Newtown doubled as people rushed back to bars and restaurants.

“In Sydney Friday nights and weekends have recovered significantly … restaurant areas, parks, beaches, they are all over-performing compared to the city as a whole,” he said.

Melbourne had more movement in its outer suburbs, compared to trips to the city.

Commuter numbers on public transport in Sydney remains lower than the roads amid the coronavirus pandemic.Credit:Rhett Wyman

“The morning commute was particularly strong … it declined less, it was more resilient,” Mr Taylor said.

However, the morning commute is now increasing at a slower rate compared to weekend trips in Sydney, which Mr Taylor said was indicative of many people choosing to remain working from home.

Sydney’s public transport figures suggest patronage is hovering between 40 and 50 per cent capacity, with about 1 million trips a day in early July.

Traffic on Sydney’s toll roads rebounded faster than public transport, with Transurban reporting a decline of 13 per cent in June compared to the previous year.

The tolling giant’s airport link in Melbourne remained 30 per cent lower than the previous June.

Despite snapping back to resume their social life, Sydneysiders broadly appeared to adhere to the lockdown restrictions when they were imposed by the NSW government.

Trips to Bondi fell by almost 80 per cent within a week after beaches were closed in early April, while weekend trips dropped by close to 70 per cent in late March when restaurants and pubs closed.

While the rideshare company has seen declines across much of its business, weekend trips have out-performed the previous year in New Zealand.

“So that’s certainly a real green shoot of hope that in this ‘new normal’ there are parts of the week which are growing versus this time last year,” he said.

Stronger restrictions in New Zealand meant rides declined by more than 90 per cent during the country’s lockdown.

Tom Rabe is Transport Reporter with The Sydney Morning Herald.