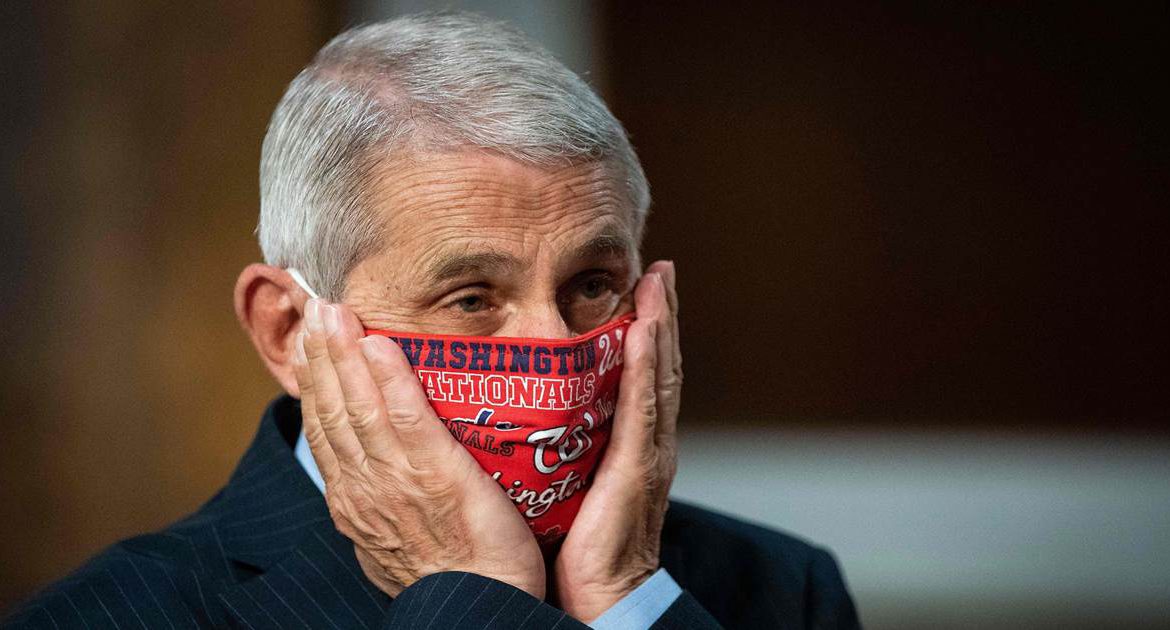 The White House is seeking to discredit Dr. Anthony Fauci, the country’s leading infectious disease expert, as President Donald Trump works to marginalize him and his dire warnings about the shortcomings of the U.S. coronavirus response.

Among them: Fauci’s comments in January that the coronavirus was “not a major threat” and his guidance in March that “people should not be walking around with masks.”

It was a move more characteristic of a political campaign furtively disseminating opposition research about an opponent than of a White House struggling to contain a pandemic that has killed more than 135,000 people, according to an NBC News tally.

Fauci, who runs the National Institute of Allergy and Infectious Diseases, had been a leading member of the White House coronavirus task force and a key communicator with the public until the president soured on his sober assessments of the situation, which have increasingly conflicted with the more sanguine picture of a virus in retreat that the president has sought to paint.

In recent days, Fauci has deviated from Trump by disputing that the U.S. is “doing great” and by faulting the decision in some states to reopen too quickly and to sidestep the task force’s suggested criteria for when it’s safe to loosen restrictions. In a particularly alarming prediction, Fauci said he wouldn’t be surprised if the U.S. was soon adding 100,000 new cases a day — a figure that would reflect an abject failure to slow the spread.

The coronavirus is surging nationwide, which Trump has repeatedly downplayed as the result of increased testing rather than growing numbers of infections. Florida on Sunday reported over 15,000 new cases, the most any state has reported in a single day since the pandemic began. The U.S. on Friday also surpassed 70,000 new coronavirus cases nationwide for the first time.

As physicians and scientists have learned more about the coronavirus, the medical consensus on how to treat it and limit its spread has evolved — and not just in the U.S. Many of Fauci’s assertions called into question by the White House official were based on the best available data at the time and were widely echoed by Trump, other members of the task force and senior White House officials.

“When you learn more, you change those recommendations,” Surgeon General Jerome Adams, another member of the task force, told CBS News on Sunday. “Our recommendations have changed.”

The White House declined to provide further comment. But the signs of its displeasure have been mounting. On Thursday, White House press secretary Kayleigh McEnany declined to say whether Trump still has confidence in Fauci, and the president said of him the same day: “He’s made a lot of mistakes.”

“I disagree with him,” Trump said in a separate interview with Gray Television’s Greta Van Susteren last week.

Signs of tension between Fauci and the president are growing. Fauci said last week that he hadn’t seen Trump in person since June 2 and hadn’t briefed him in person in at least two months.

Fauci, who has served in the federal government for decades, can’t be directly fired by the president, and there were no signs that Trump was seeking to get rid of him altogether. Rather, the White House salvo appeared aimed at undermining the public’s trust in the renowned immunologist in hope that Americans will be more inclined to believe Trump’s far more optimistic version of events as the November election marches closer.

Fauci has enjoyed broad support from the public, which got to know the gruff-speaking doctor during his frequent appearances at the task force’s televised briefings — a mainstay of the early response to the pandemic that has since fallen largely by the wayside.

A New York Times/Sienna College poll last month found that 2 in 3 registered voters approved of Fauci, including half of Republicans and 4 in 5 Democrats. Trump, by comparison, enjoyed support of his handling of the crisis from only 1 in 4 voters in the same poll, including just 4 percent of Democrats.

Another member of the coronavirus task force, Dr. Brett Giroir, added to the pile-on, saying Sunday on NBC’s “Meet the Press” that Fauci hasn’t always been correct.

“I respect Dr. Fauci a lot, but Dr. Fauci is not 100 percent right, and he also doesn’t necessarily, he admits that, have the whole national interest in mind. He looks at it from a very narrow public health point of view,” Giroir said.

Josh Lederman is a national political reporter for NBC News.

Kelly O’Donnell is a White House correspondent for NBC News.

Don't Miss it Coronavirus: What’s happening around the world on July 12
Up Next Coronavirus: South Africa bans alcohol sales again to combat Covid-19