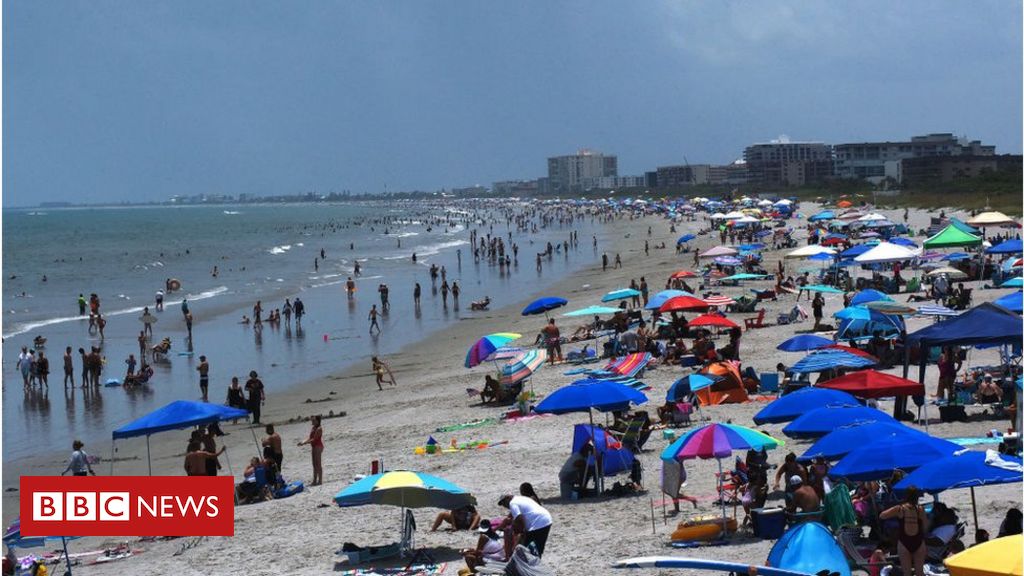 Florida is fast becoming America’s latest Covid-19 epicentre. The surge in the Sunshine State has been linked in part to younger Americans – but that doesn’t mean there’s no cause for concern.

Like many Covid-19 stories, it started with a dry cough.

Mr Bharath, who is a hospital nurse in South Florida, says he caught the virus from a patient when the Covid-19 screening process for admissions was less strict. He was told to self-quarantine two days later.

At 34 years old, Mr Bharath does not fall into a virus-vulnerable age group. But 14 days after that first contact, he had coughed up blood and checked into the hospital.

Two days later, on 26 March, he was intubated.

“I didn’t think it was too bad,” he says, describing his first couple of hours in the ER. “I honestly thought they weren’t going to admit me at the hospital, just send me home with some sort of medication.”

As his symptoms worsened, Mr Bharath says he would wake up in a fever-sweat every six hours, feeling chills and lightheaded and unable to catch his breath.

Sanjay Bharath, a 34-year-old nurse, was hospitalised over the virus

“I couldn’t take a big breath without coughing and choking,” he says. “It’s like you’re running a marathon constantly just by sitting down.”

Mr Bharath would remain on a ventilator for eight days.

Florida has been averaging nearly 10,000 new cases per day for the last week. On 12 July, the state broke the national record by reporting 15,300 cases in a single day. A Reuters analysis on 12 July found if Florida were a country, it would be fourth in the world for most new cases in a day.

As of 13 July, over 4,200 Floridians have died due to the virus and the state’s weekly average has risen to 73 people each day by local counts.

Florida saw the biggest daily jump in hospital admissions on 9 July, with more than 400 patients needing treatment. The same day saw the state’s all-time highest daily death toll, with 120 residents, including an 11-year-old girl, dying due to the virus.

Why have attitudes to face masks changed?

Critics say the number of deaths is probably higher, as Florida does not like other states report deaths suspected as having been caused by Covid-19. The state also has yet to report daily hospital admission rates, though officials have promised to do so.

Along with Texas and Arizona, the Sunshine State has fast become one of the regions with the highest surges in the country.

The positive test rate – which indicates how much the virus is spreading even with testing increases – is nearing 20%, the highest since early March when the pandemic hit the US. That’s also four times the standard for reopening set by the World Health Organization, and double the recommendation by the Centers for Disease Control.

Florida only hit the 100,000 case mark on 22 June, according to data from Johns Hopkins University. Just 13 days later, that number had doubled.

“There’s a lot of misinformation all over the web about the seriousness of this outbreak,” says Dr Aileen Marty, a Florida International University infectious disease expert who has been working with state officials on the pandemic response. She says this is partly why Florida is now among the worst-hit regions.

“Since we don’t have a consistent message in our state, let alone our country, there’s even more confusion.”

In May and June, Governor Ron DeSantis had said reopening was feasible as cases had declined. He promised no roll-backs.

As cases began rising, Mr DeSantis in June reversed his decision to allow bars to reopen. But he has refused to require masks statewide, though local leaders in major cities like Miami have done so, and has joined President Donald Trump in emphasising the importance of keeping the economy open.

“The way that we’ve acted after our initial lockdowns has perpetuated the problem,” Dr Marty says. “It was a failure because they didn’t do it right the first time.”

Dr Marty, who also serves as a World Health Organization adviser, says establishing a contact tracing and isolating system while the state was in lockdown was one key step that never happened.

A lack of early testing of asymptomatic individuals plus weeks of civil unrest, between anti-lockdown protesters and marches against racial inequality, have also worsened the situation.

But even as Florida’s numbers continue to trend upwards, Mr DeSantis said last week he felt the state’s numbers had stabilised, telling residents: “There’s no need to be fearful.”

The Republican governor has also downplayed the severity of Florida’s outbreak by pointing to the increase in testing and younger Floridians being infected – particularly those aged 25 to 34 – as well as a lower death rate.

“Generally, deaths follow about two weeks behind when we get the positive tests,” Dr Marty explains. She pushes back against the notion that America is doing well with deaths from this virus, saying even looking at just the raw data shows the nationwide rate – around 5.6% – is concerning.

“That’s considering the fact that we’re better at it now than we were,” she adds. “We’re getting people in beds sooner, moving people to ICUs sooner.”

Testing, despite delays in getting results, has also aided mitigation. Medication is helping, though Florida has run out of the Remdesivir antiviral drug and is awaiting new shipments.

Younger Americans have been blamed for surges across the country, and particularly in Florida, where most new cases are from those under age 30 on the heels of summertime weather and national holidays.

The median age of infections in Miami-Dade County, the state’s most populous region, is 40. In Tallahassee, the median recently hit a low of 25 years old.

But just because younger people are less likely to die than the elderly from this disease does not make this surge less worrying. Health experts warn there are still serious risks and far too many unknowns about what contracting Covid-19 means in the long-term.

Recent studies have found that some asymptomatic survivors lost some of their sense of smell, even if they did not notice a change. In scans, individuals who otherwise feel fine show signs of lung damage.

“There is a risk to [young people] now, which is small, and a risk for their future, which is unknown,” Dr Marty says.

In hospital, Dr Marty has seen Covid patients develop clots that lead to strokes. Some clots lead to losing limbs. Others develop an inflammation of the heart. All this in addition to the damage to the lungs – the scarring they will feel the effects of for the rest of their lives.

In the last week alone she has cared for patients ranging from 30 to 80 years old.

“It’s not one and done with this thing,” she emphasises.

There are questions when it comes to herd immunity as well – with no proof yet that it works with this virus. Data from the six other coronaviruses that have caused infections in humans suggests none of them produce immunity lasting more than a year.

Mr Bharath was one of the first staff in his hospital to catch Covid-19, back in March.

After being taken off the ventilator, the 34-year-old was moved from the ICU to recover for four days in a Covid-19-only unit – the same unit where he works now. No visitors were allowed in at all, even family.

“The recovery was a little difficult at first,” Mr Bharath says. “I was still really out of breath, I still had some pneumonia. It was still difficult breathing and moving around.”

In the two weeks in hospital over Covid-19, Mr Bharath lost 20 lbs (9kg). Lying still in a hospital bed exacerbated a prior nerve issue in his feet – he lost some feeling in his toes while other tendons had stiffened up painfully. He was out of work for another six weeks.

Now, four months since his hospital stay, Mr Bharath is still recovering. “I still get short of breath a bit here and there,” he says.

When he returned to work at the start of June, he says he “hesitated a little bit”.

“But I felt like I owed the staff and the employees, and there’s still a job to be done, so I had to go back.”

The never-ending work is beginning to take a toll on healthcare workers across the state. Staff are exhausted, frustrated, scared.

As of 13 July, there are just over 13,700 hospital beds – about 22% of the total – still available in the state, according to data from the Agency for Health Care Administration. Nearly half of all the ICUs in the state report being at least 90% full, leaving under 1,200 beds available. Over 40 hospitals are already at capacity.

Florida will be importing over 100 nurses in the next few days, and it seems likely the state will need to import doctors as well. Personal protective equipment – essential for keeping staff safe and containing the virus’ spread in care settings – is also running low again.

“We’re stressed out,” Dr Marty says. “Nurses are coming to me because they’re being told to wear surgical masks instead of N95s because we don’t have N95s.”

Testing continues to be America’s ever-present problem. Without it, keeping Covid-19 contained is a shot in the dark.

The US had begun to ramp up testing capacity, but demands now are threatening to overwhelm labs in Florida and nationwide. Machines are not able to keep up with the surge in tests, resulting in delays that in turn fuel community spread as people do not know if they’re positive for days.

Mr Bharath says it’s frustrating to see people continue to refuse to wear masks and deny that Florida’s recent surge stemmed from its push to reopen.

“They’re putting a lot of people at risk,” he says, adding that there’s always the fear that he might catch it again or bring it home to more vulnerable family members.

“The weird thing about this virus is it affects a lot of people differently,” Mr Bharath says.

“Why take the risk at all if you can?”

Don't Miss it How incompetent is Donald Trump? Interview with John Bolton | Conflict Zone
Up Next Coronavirus: Greece to start tourist season in mid-June – BBC News