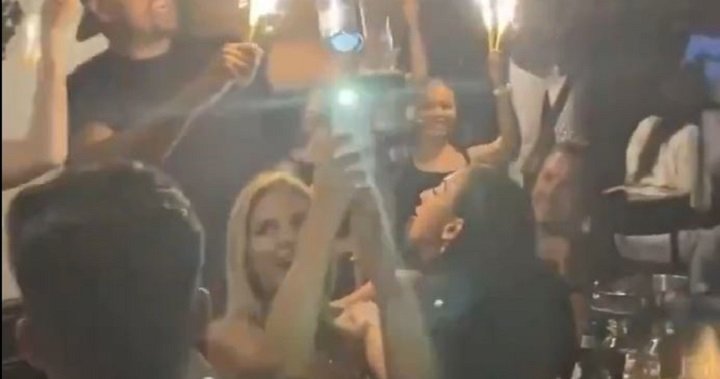 TORONTO — A popular Toronto restaurant is under investigation after a video released on social media over the weekend appeared to show patrons and staff failing to follow COVID-19 public health rules.

Mayor John Tory has confirmed that the Alcohol and Gaming Commission of Ontario has launched an investigation into MARBL, located in the city’s downtown.

A version posted to Twitter had been viewed more than 18,000 times by Tuesday and triggered outcry online.

Just in: @JohnTory confirmed that this video has triggered an investigation by the AGCO into MARBL. https://t.co/vUvIjcV8dZ

Many social media users called on local and provincial authorities to strip the bar of its liquor licence.

MARBL confirmed in a statement to The Canadian Press that the video was authentic, but insisted it did not show the restaurant was breaking public health rules.

“When thunderstorms began in the middle of service on Friday, we were forced to bring the group under the covered portion of our patio to finish their evening. The two minutes of footage that has been shared is an anomaly and not reflective of the rest of the evening, which was all socially distanced,” the club’s statement said.

Tory, however, said public health guidelines apply to all restaurants and bars under current Stage 2 restrictions, regardless of the weather conditions.

“I think it was made fairly clear at the beginning that … people who are on the outdoor patios, which were permitted, would have to seek shelter elsewhere other than piling into these establishments,” Tory told a news conference on Monday.

It’s not the first time a downtown Toronto establishment has been called out for failing to comply with public health guidelines.

A popular bar — Goldie — lost its liquor licence earlier this month after authorities learned it had hosted an illegal gathering of 125 people.

South of the border, public health experts say bars and indoor restaurants have been some of the biggest vector points for mass transmission of the novel coronavirus since the country began rapidly reopening last month.

Don't Miss it Coronavirus in South Africa: Inside Port Elizabeth’s ‘hospitals of horrors’
Up Next Mitch McConnell warns Kentucky about coronavirus’ surge as Trump downplays pandemic