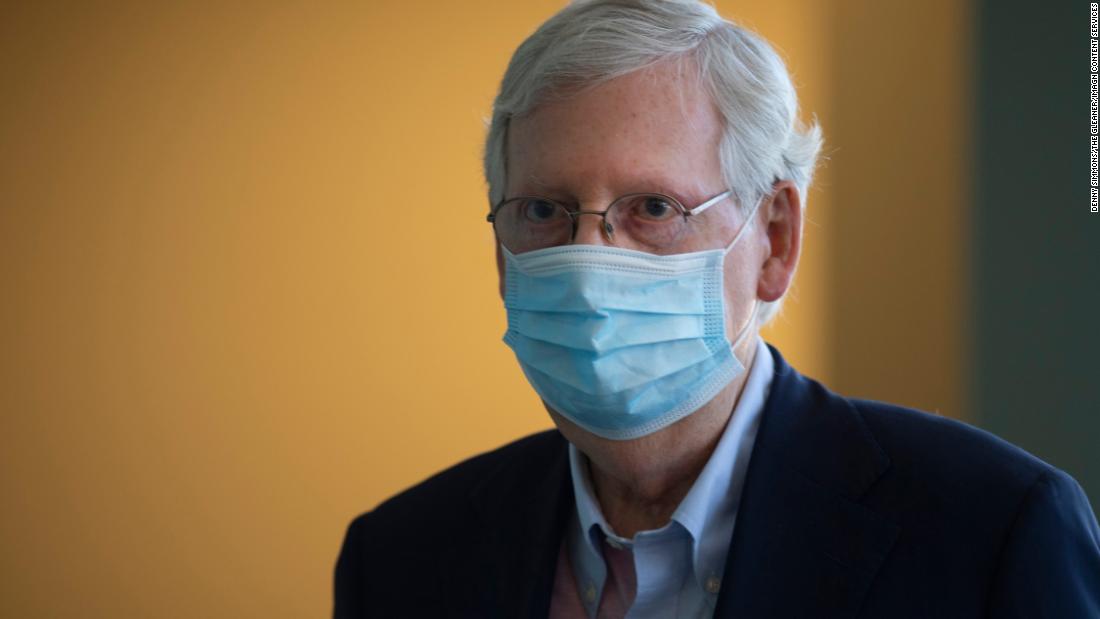 “Well regretfully, my friends, it’s not over,” McConnell said Monday at a hospital in Mt. Vernon, Kentucky. “We’re seeing a surge in Florida and Texas and Arizona and yes, here in Kentucky.”

It’s a far different message than what’s being espoused by President Donald Trump, who boasts about the country’s response, demands the economy reopen, rarely urges Americans to wear a mask and dismisses the virus’ surge across the Sun Belt and the rise in cases in 37 states.

“It’s going to take a while to get a vaccine,” McConnell said back home this week, less than a week after Trump promised a vaccine “very, very soon” and in “record time.”

McConnell, on the other hand, urges caution.

On Tuesday, McConnell added in Henderson, Kentucky: “The earliest I’ve heard anybody suggest one could be available would be later this year, and that would be extremely optimistic.”

And as Trump dismisses the need for more testing, and falsely blames increased testing for a sharp rise in Covid-19 cases, McConnell has repeatedly called for more, saying that expanding testing capacity — along with a treatment and vaccine — are central to getting the country back to normal.

That the President and the most powerful Republican in Congress are voicing far different messages is striking — given that November’s elections could turn on Washington’s response to the pandemic, underscoring how Trump’s rosy view of the virus has little backing within his party. Moreover, McConnell has long preached party unity and message discipline during election season, but staying on the same page rhetorically with Trump is a virtually impossible task.

As he meets with hospital workers and talks to local reporters fewer than four months before he faces voters and seeks a seventh Senate term, McConnell doesn’t criticize Trump about the pandemic response, and he makes clear that the Senate GOP and Trump administration want to advance a new recovery package later this month, even as Democrats attack him for moving too slowly.

Back in Kentucky, McConnell’s speeches have been mostly devoid of politics and steer clear of the rhetoric from the partisan battles he leads in the Senate. Instead, he provides a mostly apolitical view of the crisis.

Privately, some top Republicans told CNN they wished Trump would take a similar approach: Talk candidly about the real challenges in dealing with the deadly pandemic, level with the public about the shortcomings to the federal response, avoid downplaying the real risks to Americans and try not to rush a reopening of the economy at the risk of public health.

“He would be in a much different spot if he did,” one GOP source said of Trump.

Indeed, as polls show clear majorities of voters disapproving of Trump’s handling of the crisis, Republicans are wary about aligning themselves with the President’s claims as he questions the science, trusts his own instincts and undercuts the credibility of his own health advisers, such as Dr. Anthony Fauci, the government’s top infectious disease expert.

“Getting in a contest with Dr. Fauci about whether he was right or wrong, doesn’t move the ball forward,” Sen. Lindsey Graham, the South Carolina Republican, who is up for reelection this year, said Tuesday. “The infection rate is going up.”

In appearances across his state, McConnell doesn’t mention Trump much at all. In Washington, McConnell is frequently asked by reporters about the President’s comments and incendiary tweets, and he often refuses to engage. He took a similar tack in Kentucky last week when asked by a reporter about the conflicting messages from Fauci and Trump’s White House.

“I can only speak for myself,” McConnell replied. “What I try to do is to be a good example,” pointing to mask-wearing and social distancing in the Senate.

In Kentucky in recent weeks, McConnell instead talks about Washington’s response to the pandemic and his plans to move ahead on a new package, which he is currently negotiating with senior administration officials and key GOP chairmen. Democrats have called on him to move more quickly, engage in bipartisan talks and take up a $3 trillion package that passed the House two months ago, a proposal McConnell has roundly rejected as he called on Washington to first take stock of the roughly $3 trillion already approved before moving on a new plan.

Senate Minority Leader Chuck Schumer told Senate Democrats on a private call Tuesday there has been no outreach from McConnell on a new plan, warning his caucus that the GOP leader would try to advance a partisan bill later this month.

“Republicans are stuck shilling for special interests,” Schumer told Senate Democrats, according to a person on the call.

Since he helped usher through the $2.2 trillion economic rescue package in March, the largest in history, McConnell has been barnstorming the state to thank first responders and tout the elements of the measure, citing a $12 billion impact the law had on his state, and meeting with workers at food banks and hospitals. He also points out that if he weren’t majority leader, Schumer would be driving the agenda.

Over the two-week July 4 recess that ends Friday, McConnell will have held 18 events across the state, according to his aides. And during the events, he delivers a similar refrain: Talking about how Washington had to figure out how to respond to this novel virus, how it turned the economy upside-down and how Americans should take steps to protect themselves and others against the continuing the spread of the disease.

And he makes clear, it’s not over.

“The single best thing we can do to protect ourselves and others is to wear a mask and maintain social distancing,” McConnell said in Corbin, Kentucky. “It’s not that hard. Some people in the country tried to politicize that issue. Believe me, the coronavirus is not involved in American politics, has no involvement in American politics. But we have an obligation as individuals to try to protect ourselves and protect others.”

McConnell’s advisers say the senator knows how to talk to his constituents during a time of crisis.

“It doesn’t do anybody any good to not tell them the truth,” said Josh Holmes, a top McConnell adviser and his former chief of staff. “He feels a sense of obligation to level with people with what they can do here at this point. There’s no magic button that’s going to get us through the six months and beyond … The best you can do is try to mitigate it from here.”

McConnell is facing reelection back home against Democrat Amy McGrath, who is criticizing the GOP leader’s handling of the crisis, telling an interviewer this week with WYMT in Eastern Kentucky that McConnell wants “massive bailouts for corporate America” and aid for his “corporate donors.”

But the rescue package that McConnell is campaigning on passed the Senate with no dissenting votes — a rarity on Capitol Hill — and has been the subject of an ad campaign the Senate GOP leader has run across the state. A review of his ads shows that 45% have focused on the coronavirus, more than any other topic, with the ad his campaign runs the most touting his role during the crisis, a sign the GOP leader sees the issue as front-and-center on voters’ minds.

“America is in crisis like never before, and in times of crisis, we look to leaders,” the ad says, showing McConnell.

CNN’s David Wright and Kevin Liptak contributed to this report.