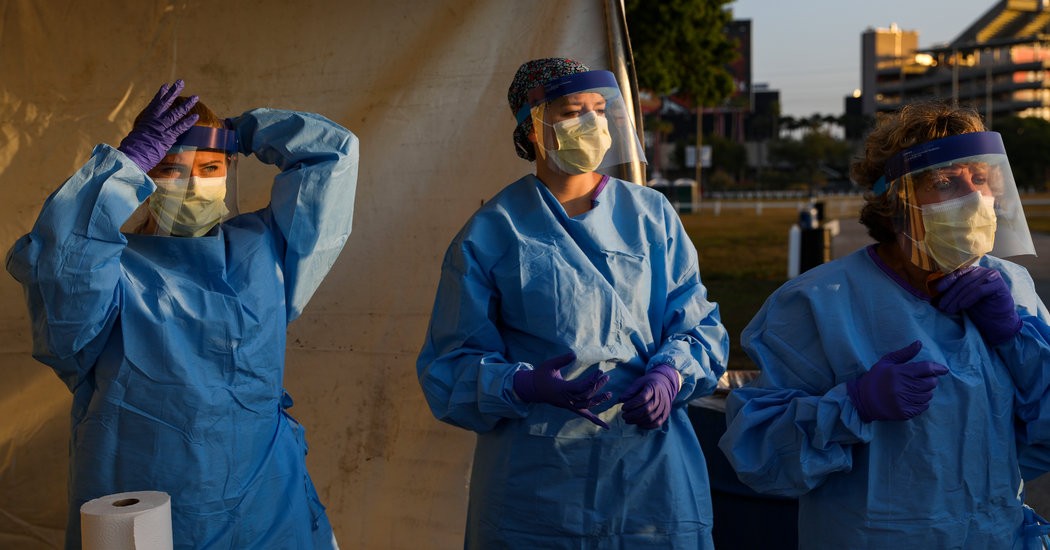 In March, New Zealand closed its borders and imposed one of the world’s strictest lockdowns during the early stages of its outbreak. By June, it had virtually eradicated community transmission and lifted all restrictions. But after a long streak with no new cases, a few have emerged in early July.

Dr. Anthony S. Fauci, the nation’s top infectious disease expert, warned that the country was still “knee-deep in the first wave” of the pandemic, with more than 130,000 coronavirus deaths and nearly three million cases. Dr. Fauci said that having more than 50,000 new cases a day recorded several times in the past week was “a serious situation that we have to address immediately.”

The Trump administration sends formal notice of U.S. withdrawal from the W.H.O.

The Trump administration notified the United Nations that the United States was withdrawing from the W.H.O. effective July 6, 2021. The move would cut off the organization’s biggest sources of aid.

Brazil’s president, who repeatedly dismissed the danger posed by the virus, tests positive.

President Jair Bolsonaro of Brazil disclosed on July 7 that he had been infected with the virus, saying that he was tested after experiencing fatigue, muscle pain and a fever. The news came after months of denying the seriousness of the pandemic and brushing aside protective measures, and after more than 65,000 Brazilians had died.

On July 10, the United States reached 68,000 new cases for the first time, setting a single-day record for the seventh time in 11 days. The infection rate was underscored by alarming growth in the South and West. At least six states had also reported single-day records for new cases: Georgia, Utah, Montana, North Carolina, Iowa and Ohio.

Hong Kong shuts down schools amid a third wave.

Hong Kong, a city of seven million, has reported more than 1,400 cases and seven deaths. But on July 10, it shut down its school system as it worked to contain a third wave of infections, which official reported included 38 new cases.

The third wave, which comes after infections surged in March and were contained by May, was a setback for a city that had largely returned to normal, with restaurants enjoying packed crowds and workers returning to offices.