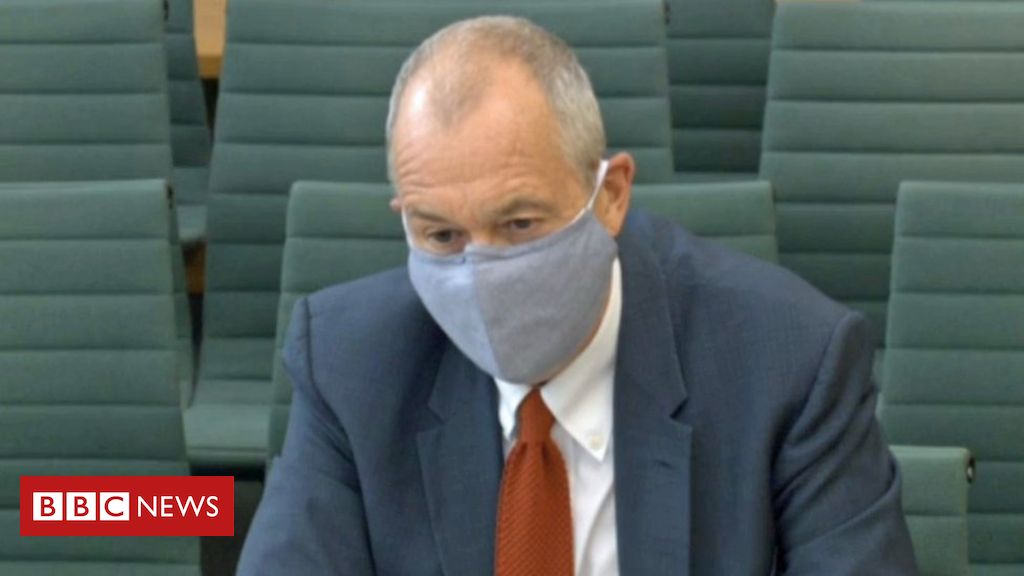 Sir Patrick wore a reusable mask to the session in Parliament

There is “absolutely no reason” to change the guidance on working from home, the UK’s chief scientific adviser Sir Patrick Vallance has said.

Since late March the government has advised people to work from home if possible to help curb coronavirus.

But last week Prime Minister Boris Johnson signalled a change, saying: “I think we should now say, well, ‘Go back to work if you can.'”

Sir Patrick said home working was still a “perfectly good option” for many.

Speaking to the Commons science and technology committee, he said it was his view – and one shared by the Scientific Advisory Group for Emergencies (Sage) – that distancing measures were still important for containing the virus.

“Of the various distancing measures, working from home for many companies remains a perfectly good option because it’s easy to do,” he said.

“I think a number of companies think it’s actually not detrimental to productivity. And in that situation, there’s absolutely no reason I can see to change it.”

It comes as the government continues to try to balance the economic and health risks of the pandemic.

Asked about Britain’s response to the virus, Sir Patrick said: “It’s clear that the outcome has not been good in the UK, I think you can be absolutely clear about that.

“There are many factors that are going to play in this as we look and say, ‘what is it that makes some countries having done worse than others?’, and there will be decisions made that will turn out not to have been the right decisions at the time.”

In mid-March, Sir Patrick said it would be a “good outcome” for the UK if the number of deaths from the virus could be kept below 20,000.

The latest figures show 45,119 people have died after testing positive for coronavirus in the UK, up by 66 on the previous day.

Sir Patrick said it was “quite probable” that the virus will come back “in different waves over a number of years”, but stressed the UK was still going through the first wave.

“When people talk about second wave now, actually, what I think they’re talking about really is a re-emergence of the first wave,” he said.

“All we have done is suppressed the first wave and when you take the brakes off you would expect it to come back.”

It comes after a report, requested by the scientific adviser, suggested the UK could see about 120,000 new coronavirus deaths during this winter. This could be seen as “the tail end of the first wave still”, he said.

During the session, Sir Patrick told MPs the government was advised to implement lockdown measures earlier than they did.

In the run up to lockdown, he said steps were taken to mitigate the virus, including isolating households and advising against visiting pubs and theatres which caused “quite extreme” changes in behaviour.

But he said after data suggested the number of virus cases was doubling every three days, Sage recommended – either on 16 or 18 March – that the “remainder” of measures to curb coronavirus should be introduced.

Speaking in the Commons afterwards, Health Secretary Matt Hancock said: “16 March is the day when I came to this House and said that all unnecessary social contact should cease – that is precisely when the lockdown was started.”

Labour MP Zarah Sultana said that “advising people to socially distance is not the same as imposing a lockdown. That week-long delay could have cost thousands of lives”.

In June, former government adviser Prof Neil Ferguson said the number of coronavirus deaths in the UK would have been halved if lockdown had been introduced a week earlier.

When did lockdown actually begin?

The beginning of lockdown has usually been dated to the evening of 23 March when Prime Minister Boris Johnson addressed the nation and people were told to mostly avoid leaving home and all non-essential shops were closed.

In fact, Mr Hancock has previously said that is when lockdown began.

In a debate in the Commons on 2 June, he noted that the daily death figures were “lower than at any time since lockdown began on 23 March”.

BBC health correspondent James Gallagher said: “A key piece of evidence came out on Monday 16 March which showed that 250,000 people could die.

“That night, the government advised people to avoid pubs and work from home if possible. On Wednesday schools were told they would close at the end of the week.

“On Friday, all restaurants, pubs, clubs and indoor sport and leisure facilities were ordered to shut. The UK was then put into full lockdown the following Monday.”

Sir Patrick also said there was no assumption that a vaccine for coronavirus would be available in the immediate future, after encouraging early results from clinical trials raised hopes of finding one.

“Our assumption is we won’t have it and when we get it we will be thrilled,” he said.

Conservative MP Mark Logan asked Sir Patrick about his face covering, which he wore as he entered the session but took off while giving evidence.

“It’s a fairly standard cloth face covering,” he said. “It’s got a nose thing to make sure it doesn’t slip off my nose and it’s got several layers.”

Foggy glasses, recycling, kids: Your guide to wearing a maskCoronavirus: How to make your own face mask

Asked how long he would wear it for and whether he washes it, Sir Patrick said: “I think you should wear them for short periods. As I say, I don’t think it’s something you can wear all day in indoor environments – there’s some evidence for that.

“And yes, like my other clothes, I wash it.”

YOU, ME AND THE BIG C: Cancer treatment during the pandemic

GROUNDED WITH LOUIS THEROUX: The 10 most surprising moments from the lockdown podcast