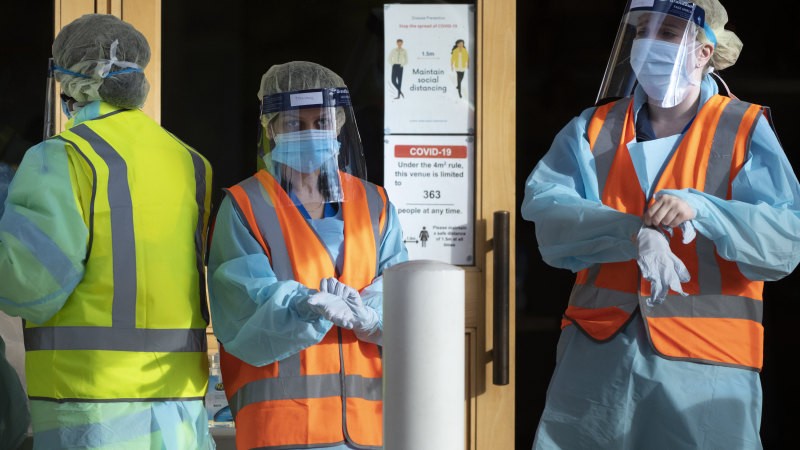 The new restrictions will apply from 12:01am on Friday July 24.

“These measures we are bringing in are to protect NSW. These measures will reduce the risk of community transmission getting out of control,” Ms Berejiklian said.

The Crossroads Hotel cluster has grown to 42. Credit:Peter Rae

The restrictions come as NSW recorded 13 new cases of coronavirus cases up to 9am Friday.

That includes eight cases confirmed in the 24 hours to 8pm Thursday night, and several of those cases including a woman who travelled from Melbourne to Ballina were reported on Thursday.

Between 8pm Thursday and 9am Friday, five more cases have been recorded, including three linked to the Crossroads Hotel cluster.

The cluster has grown to 42 cases, including 27 people who are linked to the outbreak but did not attend the hotel themselves. Some of those are cases of tertiary infection – contacts of people who were close contacts of Crossroads Hotel cases.

“This highlights the rapidity and spread this virus can move through the community,” NSW Chief Health Officer Dr Kerry Chant said.

Two of the new cases, in a man in his 40s and a teenager from the same household, remain under investigation.

The state conducted a record 24,467 tests on Thursday, up from 22,836 in the previous 24 hours. More than 3000 were in south-western Sydney, and Dr Chant asked people in that area to continue to come forward for testing.

Dr Chant also hosed down other media reports that several pop-up testing clinincs in south-western Sydney would be closing.

“The clinics will remain open,” she said.

The only pop-up that is closing at this stage is the one located in the Crossroads Hotel carpark, but alternative venues were being canvassed by NSW Health.

Victoria on Friday announced 428 new cases – a record tally for the state, just a day after it recorded its previous daily high of 317 – and three deaths. The state has a total of 5165 cases.

It is the biggest daily increase in infections since the pandemic began and the 12th day in a row of triple-digit increases in daily infections.

Dr Chant has asked anyone who has spent time in Wetherill Park’s Stockland Mall in the last two weeks to be “particularly vigilant for symptoms”.

“There are five recent cases that report spending some time in the Stockland Mall at Wetherill Park while infectious,” she said.

Dr Chant said she was also concerned a “transmission event” occurred at the Thai Rock restaurant in the mall.

A woman in her 30s who worked at the restaurant on July 9, 10, 11, 12 and 14 has been diagnosed with COVID-19, and Dr Chant said people who had been at that restaurant on those dates should “watch carefully” for symptoms.

Dr Chant added it was important not to penalise businesses called out by NSW Health as potential places of transmission, saying once they undergo deep cleans they were probably the safest places to visit.

As of Friday, new restrictions on pubs apply in NSW. Bookings are capped at 10 people instead of the 20 previously allowed, all patrons must sign in and be seated and there is a maximum of 300 people or one person per four square metres inside.

Pubs must also register their COVID safety plans with the NSW government and have a dedicated hygiene marshal to oversee social distancing, cleaning and hygiene at the venue.

“Any business found in breach of the public health orders could face a penalty of up to $55,000 and a further $27,500 penalty may apply for each day an offence continues.”

Prime Minister Scott Morrison on Friday branded the outbreaks in Victoria as “very serious”, warning it will remain that way for some time.

“More than 1000 Australian defence personnel are on their way,” Mr Morrison said, noting he was in regular contact with the Victorian Premier.

The breaches of hotel quarantine the state has seen are a pertinent reminder of the need to continue with other safeguards, he said.

“It’s a reminder of the need to keep on with the social distancing, to keep on with those other protections, and keep the tracing capacity up to scratch. That’s your effective defence against a breakout like what we’ve seen in Victoria.”

Asked if Australians should feel worried, the Prime Minister responded: “There is uncertainty. I know people are anxious. There is a reason to be anxious.”

“The coronavirus spreads very, very rapidly. For all those who want to seek to dismiss it and treat it lightly you have to remember that on the broad figures, the fatality rate on the coronavirus is more than five times what it is for the flu each year.”

Don't Miss it Coronavirus: No reason to change working from home advice – Vallance
Up Next What it's like when both your children come down with coronavirus | 7.30