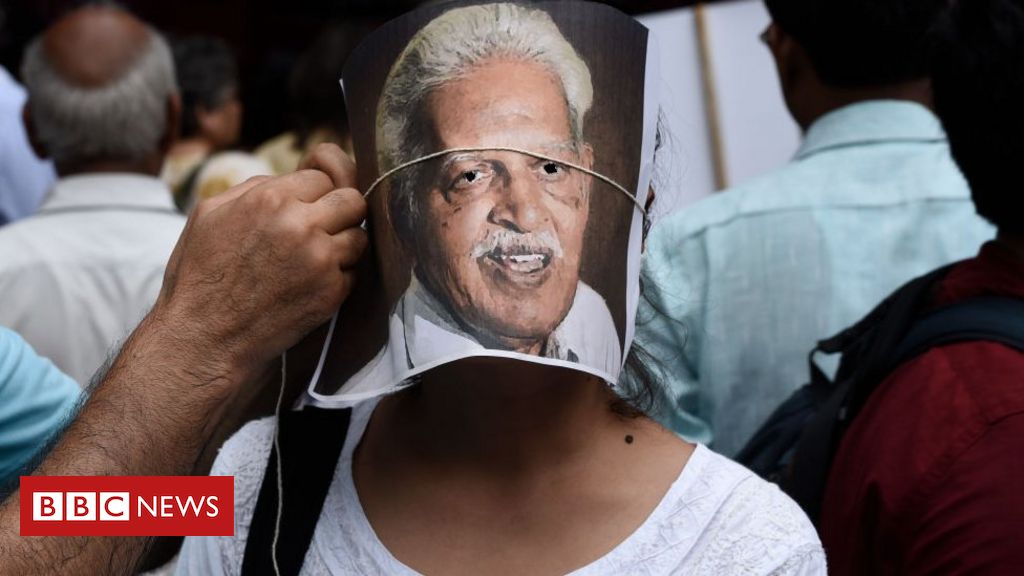 There have been protests calling for Varavara Rao’s release

India’s human rights commission has stepped in after the plight of a jailed 80-year-old poet who contracted Covid-19 in prison prompted outrage.

The commission has ordered Varavara Rao be moved to a private facility for treatment after his family said he was being neglected.

Mr Rao is a Maoist ideologue and poet who has espoused radical thinking and revolutionary ideas in his work.

He has been in jail since 2018 for allegedly inciting caste violence.

He has strongly denied the allegations and no charges have been formally brought against him.

The National Human Rights Commission (NHRC) order, which follows outrage both at home and globally, also said expenses relating to Mr Rao’s treatment would be borne by the state as he was an under trial prisoner and therefore its responsibility.

Mary Lawlor, the UN special rapporteur for Human Rights Defenders, was among those who drew attention to his plight via Twitter on Thursday, when his Covid diagnosis was revealed.

Mr Rao’s family had said a day earlier that he was delirious and being held in terrible conditions at a state hospital.

They said that when they tried to visit him in the hospital earlier this week, they found him on a soiled bed soaked in urine with no-one around to attend to him. Local media reported that Mr Rao had been unable to recognise his wife and daughters.

Mr Rao was admitted to the hospital only after his family issued a statement and held an emergency press conference alleging that he was being denied proper medical attention despite his rapidly deteriorating health.

The statement – titled “don’t kill Varavara Rao in jail!” – said Mr Rao was delirious and unable to even brush his teeth without assistance from his cellmate, who is another activist jailed in connection with the same case.

This revelation has fuelled increasing anger, especially given that his incarceration continues despite the raging Covid-19 pandemic in Maharashtra state, where he has been imprisoned.

Despite several attempts by his lawyers, he has been consistently denied bail. And though he’s been in jail for two years, the case he is charged in has not been brought to the courts.

A comment in the local Scroll website said that the state’s treatment of Mr Rao amounted to the “state imposing capital punishment without trial”.

Varavara Rao is is no stranger to prisons.

Since 1973, he has spent more than 10 years in prison under governments of all political persuasions. Mr Rao has been blamed for inciting Maoist revolutionaries with his writings and speeches, and hatching conspiracies to overthrow elected state governments.

But not a shred of evidence has been produced to prove his involvement and he has been never been found guilty. By all accounts he has never been an underground revolutionary.

Mr Rao is a polarising figure.

His supporters admire his unwavering fealty to ideology and his open support for a banned Maoist party. They also vouch for his impeccable personal integrity.

Mr Rao is being held along with several other activists and writers under the UAPA (Unlawful Activities Prevention Act) – an anti-terrorism law that makes it almost impossible to get bail.

Police accuse them of instigating caste violence at a Dalit rally in Bhima Koregaon village in the western state of Maharashtra on 1 January 2018.

Earlier, a consortium of more than 100 global intellectuals, including Noam Chomsky and Homi K Bhabha, had called for his release.

Several international organisations have also expressed concern at his plight.

Human Rights Watch has called the detentions of all the activists “wrongful” and “politically motivated” and questioned why the government did not investigate the allegations that Hindu nationalist leaders may have had a role in the Bhima Koregaon violence?

In May, the European Parliament Subcommittee on Human Rights wrote to Home Minister Amit Shah saying it was alarmed by the “intimidation and harassment of human rights defenders” by the authorities.

Don't Miss it Will Capitalism survive Coronavirus? | The World
Up Next Most Covid-19 patients admitted to a Sydney hospital in March still have symptoms | Australia news

With new COVID-19 infections in Ontario now averaging over 900 per day, new data analysis shows your chances of encountering…