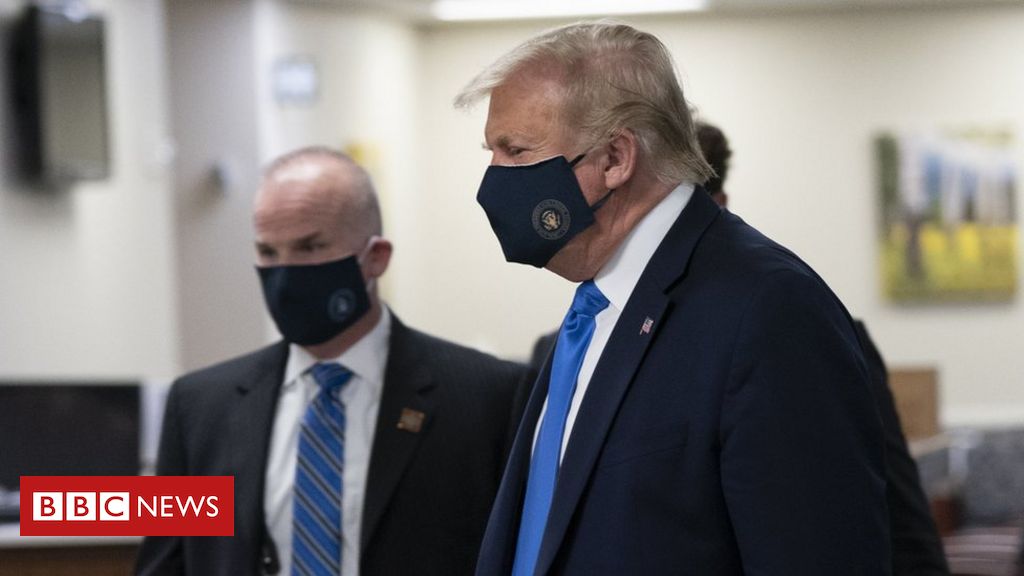 US President Donald Trump has vowed not to order Americans to wear masks to contain the spread of coronavirus.

His comments came after the country’s top infectious disease expert, Dr Anthony Fauci, urged state and local leaders to be “as forceful as possible” in getting people to wear masks.

Wearing face coverings, Dr Fauci added, is “really important” and “we should be using them, everyone”.

The wearing of face coverings has become highly politicised in the US.

The majority of state governors have now ordered that the wearing of masks outdoors be mandatory, rather than a personal choice. Among them are Republican governors, including Kay Ivey of Alabama, who have reversed their initial opposition to the mandates.

Media captionWhy the US struggled with its reopening

President Trump, who had previously resisted wearing a face covering himself, wore a mask in public for the first time last Saturday.

But speaking to Fox News on Friday, Mr Trump said he didn’t agree with a national mask mandate, saying people should have a “certain freedom”.

Earlier this week, US public health body the Centers for Disease Control and Prevention (CDC) released a statement urging everyone to wear masks.

“We are not defenceless against COVID-19,” CDC Director Dr Robert R Redfield said. “Cloth face coverings are one of the most powerful weapons we have to slow and stop the spread of the virus – particularly when used universally within a community setting.”

In the southern state of Georgia, Republican governor Brian Kemp has urged residents to wear masks for the next month.

Mr Kemp made the appeal to the state’s residents despite taking legal action a day earlier against the mayor of Atlanta, Keisha Lance Bottoms, for making face coverings mandatory in the city.

Ms Bottoms has herself tested positive for coronavirus.

Oklahoma City officials are also considering a city-wide indoor mask requirement, in the absence of a state-wide mandate.

Which states are seeing a surge in infections?

A number of US states, primarily southern states, are experiencing a surge in confirmed cases of coronavirus.

Hundreds of military medical staff have been deployed in Texas and California to help officials cope with new Covid-19 cases, and in Texas and Arizona, cooler trucks have been sent in to help store dead bodies.

In recent weeks, overwhelmed hospitals in Florida have also reported that their ICUs are at full capacity and that they cannot accept any more patients.

And some cities and states are struggling with the high demand for coronavirus tests.

In Pittsburgh, Pennsylvania, people who suspect that they have been exposed to the virus are being told to isolate at home for 14 days instead of going into testing centres, while Hawaii is keeping its two-week quarantine for incoming visitors for at least another month, because of a shortage in the supply of tests.

Meanwhile millions of children, including in the two most populous states Texas and California, have been told they won’t be going back to school for the new academic year.

Education, and the matter of when to reopen schools, is another issue that has become highly politicised.

New CDC guidance on reopening schools was due to be released this week, but US media reports that it has been delayed.

The US continues to remain at the epicentre of the global pandemic. There are now more than 3.6 million confirmed cases of coronavirus in the US, and there have been more than 139,000 deaths – the highest death toll in the world.

Don't Miss it Trump rules out national mask mandate: Coronavirus live updates | News
Up Next US 4th of July celebrations: A disaster in the making? | Coronavirus Update