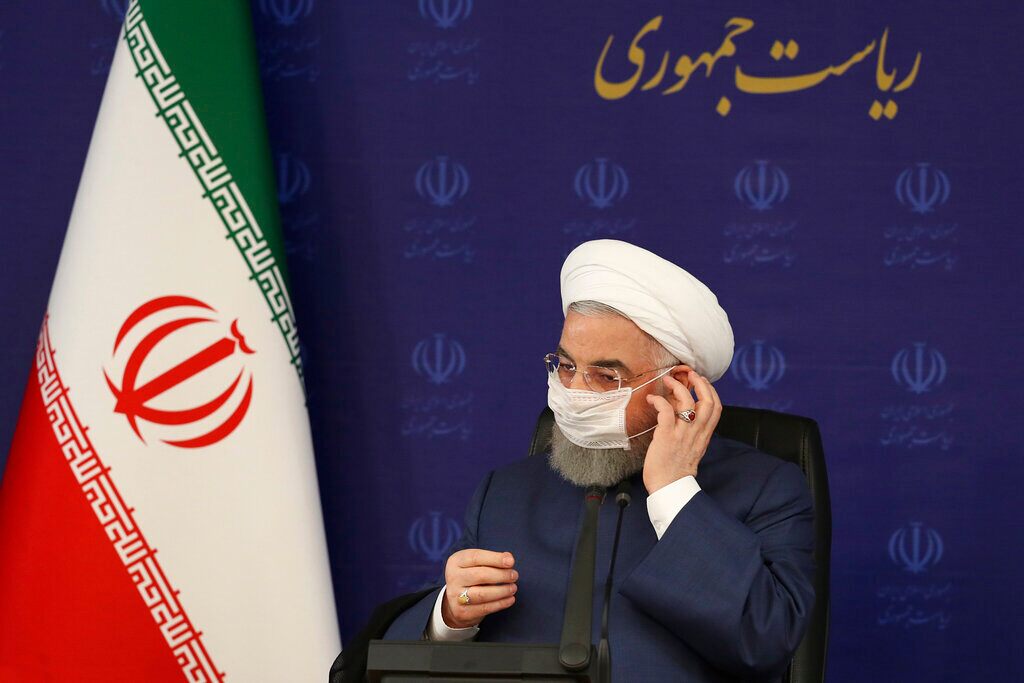 Iran’s President Hassan Rouhani estimated that up to 25 million people in the country have been infected with coronavirus – nearly double the official worldwide tally.

Despite his estimate as well as urging citizens to take precautions, the country will not reimpose lockdown restrictions.

Rouhani, speaking in a televised address on Saturday, referenced a new study by the Iranian Health Ministry that has not been publicly released, and he did not cite specifics on how the estimates in cases were reached.

The current official coronavirus case total stands at more than 14 million, according to a tally by Johns Hopkins University.

In this photo released by the official website of the office of the Iranian Presidency, President Hassan Rouhani adjusts his face mask in a meeting of the national headquarters of the fight against the COVID-19, in Tehran, Iran, Saturday, July 18, 2020. (Iranian Presidency Office via AP)

Rouhani also said he believes an additional 30 to 35 million people could be infected in the coming months. Iran’s population is around 81 million people.

The president also said more than 200,000 people have been hospitalized and the report predicts that that number will soon be “twice as many as we have seen in the last 150 days.”

Faced with a spike of 2,166 cases on Saturday and 188 deaths in 24 hours, authorities in Tehran have closed some public spaces such as coffee shops, zoos, amusement parks, boarding schools, and indoor swimming pools and banned religious and cultural gatherings for one week.

It remains the hardest-hit country in the Middle East.

Iran has faced scrutiny about their reporting of coronavirus cases and deaths, which government officials admit are probably well under the actual count.

After denying the existence of the virus in Iran for days after the likely first infection took hold, Iran held mass demonstrations and a parliamentary election, turning out thousands of people en masse.

Two months after the pandemic ramped up, parliament delivered a report in April that estimated the number of people infected at the time was probably “eight to 10 times” higher than the reported figures and said that health officials lacked adequate testing to determine an official prognosis of the virus.

The reported deaths are based solely on people who died of COVID-19 in a hospital setting. Others who may have died at home have not been recorded and some families have opted not to disclose that their loved ones ever had the virus to avoid any stigmas associated with it.