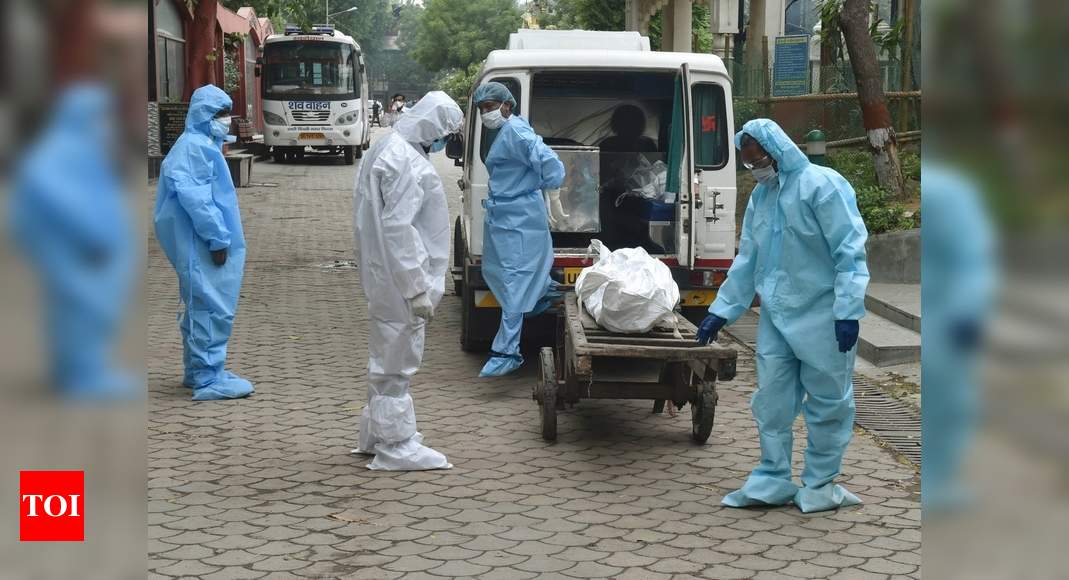 NEW DELHI: Fresh Covid-19 infections rose to another record high for a single day as more than 38,000 cases were reported from across the country on Saturday, while 545 more people succumbed to the virus, taking the total toll to nearly 27,000.
This was the fourth time this week that the daily count of cases hit a new all-time high. On Tuesday, India saw the number of fresh cases cross 30,000 for the first time. Saturday’s count stood at 38,141, as per data collated from state governments. As many as 4,127 deaths have been reported since Sunday, the highest for any week.
Two days after going past the 10 lakh mark, India’s Covid-19 caseload stood at 10,76,861 on Saturday. There were over 3.74 lakh active cases while the number of those recovered or discharged had risen to more than 6.75 lakh. The share of the recovered in the total cases has remained steady at 63% in the past few days, as the number of active cases has surged due to the spike in fresh infections.
Deaths recorded in the last seven days (Sunday to Saturday) account for more than 15% of India’s total fatalities from the pandemic, indicating the sharp uptick in Covid-19 deaths in the past few days. On Saturday, however, the number fell below 600 for the first time in four days as 545 deaths were reported. India’s total toll stands at 26,787.

As compared with Friday, deaths fell in Maharashtra and Karnataka, which reported 144 and 93 fatalities, respectively, on Saturday. However, the toll rose in Tamil Nadu (88 deaths) and Andhra Pradesh (52).
Close to four months after the lockdown began, the Covid-19 caseload in Maharashtra crossed the 3 lakh mark, while Mumbai crossed the tally of one lakh cases on Saturday.
Saturday’s jump in cases came on the back of Maharashtra reporting its second-highest count of 8,348, as well as sharp surges in other big states. These included at least six states that recorded their biggest single-day spikes — Tamil Nadu (4,807 new cases), Karnataka (4,537), Andhra Pradesh (3,963), Bengal (2,198), Assam (1,218) and Gujarat (960).
More on Covid-19

The surge in Andhra Pradesh would be particularly worrisome as the state’s previous highest single-day count was 2,602, reported on Friday.
On Friday, the number of tests conducted across the country had touched a peak of 3.61 lakh.
Andhra Pradesh also reported its record single-day high of 52 deaths as authorities struggled to contain the virus from spreading across the southern state. With cases soaring, and Andhra Pradesh galloping to the seventh position in the country in terms of overall cases, authorities said they were clearly worried about the situation.
In Tamil Nadu, the health department permitted pooled testing in some districts to reduce turnaround time for results after Tamil Nadu reported 88 more Covid-19 deaths, including 32 in Chennai and 14 in the three adjoining districts.
The uptick in deaths took the cumulative toll for the viral infection to 2,403, while the case tally touched 1,65,714 after 4,807 people tested positive on Saturday, with all 37 districts recording cases.
The Union health ministry has sent a letter to four states, including Bihar, to make renewed efforts to contain the spread of Covid-19 virus. The other states to receive the letter are West Bengal, Assam and Odisha.