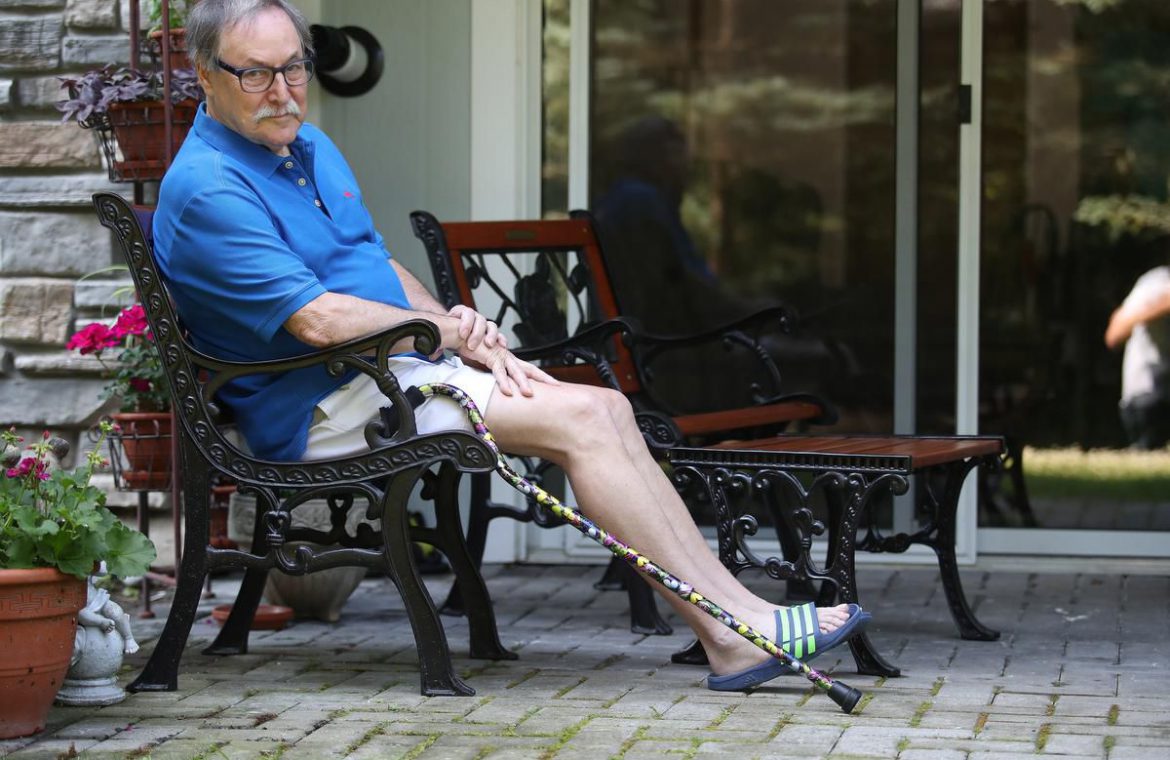 Richard Ansell was discharged from rehab in late March — or, as he puts it “when the s— hit the fan.”

Ansell, 73, had been in the in-patient program at Toronto Rehabilitation Institute’s Lyndhurst Centre for about six weeks, rebuilding strength in his right leg after a bout of transverse myelitis, a virus that inflames the spinal cord. The virus left him unable to walk.

Ordinarily, Ansell would have continued in the outpatient rehab program, with regular workouts and hands-on treatment in the hospital’s ambulatory clinic. Rehab like this is usually considered an essential intervention, the best chance to maximize healing, and, if possible, prevent a short-term injury from becoming a lasting disability.

But these were not ordinary times.

Four months later, Ansell is waiting to get back into Lyndhurst, which is now preparing to gradually reopen outpatient services. He is still using a cane to hobble around his Newmarket condo — a far way off from where he hoped he’d be in his recovery.

“I would have liked to be on a golf course, hitting golf balls. Walking normally. Doing housework,” he said. “I missed out on a lot of manipulation of that right leg to strengthen it up.”

The dramatic measures that were needed to flatten the curve have carried consequences, touching every corner of the health-care system, as the rush to save lives took precedence over everything else.

Now, in the recovery phase of the pandemic, many among us are limping along, in worse shape because of the shutdown.

In late May, the province released guidelines for hospitals to gradually resume non-emergency services, including outpatient rehab programs. However, physical distancing requirements and rigorous cleaning protocols mean fewer patients can be accommodated. At the same time, the backlog is growing.

“The people have been on waiting lists, I believe they’ve been waiting longer, for sure,” said Dr. Mark Bayley, the program medical director at Toronto Rehab, and vice-chair of the GTA Rehab Network. “And certainly, even if they get seen, sometimes their first visit is virtual.

“Unfortunately, it means that we’re having to make some tough decisions, or maybe delay them getting the answer they need.”

Rehabilitation is often a critical part of the healing process following surgery, major illness or injury. Strength-building exercises, hands-on therapy and emotional support from a team of experts, including physiotherapists and occupational therapists, can be key to regaining the ability to perform daily tasks, and carving out a new normal.

In-patient rehabilitation programs, reserved for those who require the most intensive therapy, and housed in hospitals that could be closed to visitors to limit the spread of COVID, continued in Ontario throughout the pandemic. But the halting of outpatient programs across the province — including ambulatory clinics and community-based services — interrupted the recovery for patients like Ansell, who were left for several months without the therapies they needed, despite great strides in virtual care.

Shawn Brady, who is the director of rehab at Providence Healthcare in Scarborough, said, “We did our best the last couple of months … to stay connected to patients and supporting patients in the community and in their homes. But obviously, the nature of therapy and rehabilitation (is that) many of the interventions are physical in nature, and require in-person visits as well.”

At Providence, Brady said wait times have doubled for the outpatient stroke clinic, from two weeks before the lockdown to more than a month. The wait has also doubled for the hospital’s falls prevention clinic, which supports vulnerable and frail seniors, from roughly three weeks to seven weeks.

Some people “would be declining, potentially, at home,” he said. “Those are the patients we’re connected to virtually, through telephone. If we do identify a few of these patients who are at risk, we prioritize them and get them in very quickly.”

Getting a handle on the number of patients who missed out on outpatient rehab during the lockdown is difficult, but experts believe it could be significant.

Charissa Levy, head of the Rehabilitative Care Alliance, a provincial network for rehab in Ontario, said she is developing a high-level survey of ambulatory clinics and community-based programs to get a better sense of the backlog, as well as “their capacity to serve new cases going forward, given the restrictions that they have to put in place and models of care that they have to operate under.”

Levy said there is a large and growing need for rehab in the pandemic, including among those who have survived serious COVID infections. Others have become weakened by months cooped up indoors, and may not have the know-how or technology to participate in virtual exercise programs.

“I think rehab needs to be seen as part of an essential service, as part of the pandemic response,” said Levy, who is also executive director of the GTA Rehab Network. “You’ll hear people talking about the second wave of the pandemic coming in the fall. The impact of the pandemic, and the need for rehab is being characterized as one of those upcoming waves that has yet to be seen.”

Dr. Larry Robinson, the chief of Sunnybrook hospital’s St. John’s Rehab Program, which is among several hospitals in Toronto with a dedicated in-patient unit for COVID-19, said these patients are typically given a home program to follow at discharge consisting of exercises they practised during their in-patient stay.

“Some patients will need ongoing outpatient care, and will get that virtually,” he said.

At St. John’s, which is also in the process of ramping up outpatient services, Robinson said virtual care has generally been well received by patients who don’t need hands-on therapy, and predicts it is a model that will persist beyond the pandemic.

“If you’ve got a disability after a stroke, an amputation or other injury, it takes a long time to get ready and make it to the hospital,” he said. “That preparation and travel time is reduced, as well as the burden to whoever brings you, if you’re dependent upon family or friends.”

But he acknowledges that virtual rehab is “totally not a panacea.”

At Bridgepoint hospital in Toronto, which has begun seeing some of its higher-priority patients in person at outpatient programs, wait times have increased by about two weeks since before the pandemic, a spokesperson said.

Dr. Chris Fortin, the head of the physical medicine and rehabilitation division at Sinai Health System, which includes Bridgepoint, said he will soon start seeing patients in person at his clinic again, and anticipates it will take “a couple of months to work through the backlog.”

Fortin said cancelling in-person visits was necessary to stop the spread of COVID-19, but that it has been “a frustrating experience as a physician not to be able to see patients, especially in my specialty, where the physical examination is so, so important.”

Dr. Cathy Craven, medical director of the spinal cord rehab program at Lyndhurst, said work is underway to gradually restart in-person outpatient programs, including pulling back staff who were redeployed during the lockdown and “realigning our spaces.”

She said the halting of outpatient services has been tough on patients with spinal cord injuries, who might need help and supervision to get in and out of a wheelchair, and specialized equipment to build strength.

“For people with spinal cord injury, who have no or limited voluntary movement, the remote rehab model doesn’t really work well,” she said. “I’m concerned about our growing waitlist, and our ability to scale up and serve everyone once we are open.”

After their discharge from in-patient rehab, Craven said her patients are typically enrolled in outpatient rehab for three to six months, where they continue to work toward their mobility goals, such as returning to walking or advanced wheelchair skills, like learning how to bump up on a six-inch curb.

“They sort of have a growing, gradual increase in their functional abilities or their ability to direct their care. And this is a big disruption for them both psychologically and physically,” she said of the halting of outpatient services. “I expect there will be some people who will have a missed opportunity.”

Ansell said he did his best to keep up with his exercise program he received at Lyndhurst. After the government eased restrictions on in-person therapy, he started seeing a physiotherapist in Newmarket — a stopgap while he waits for a spot at Lyndhurst.

Don't Miss it Coronavirus Updates: Weekend lockdown to be imposed in Jammu from 24 July; J&K reports 701 new cases
Up Next During Coronavirus Lockdowns, Some Doctors Wondered: Where Are the Preemies?