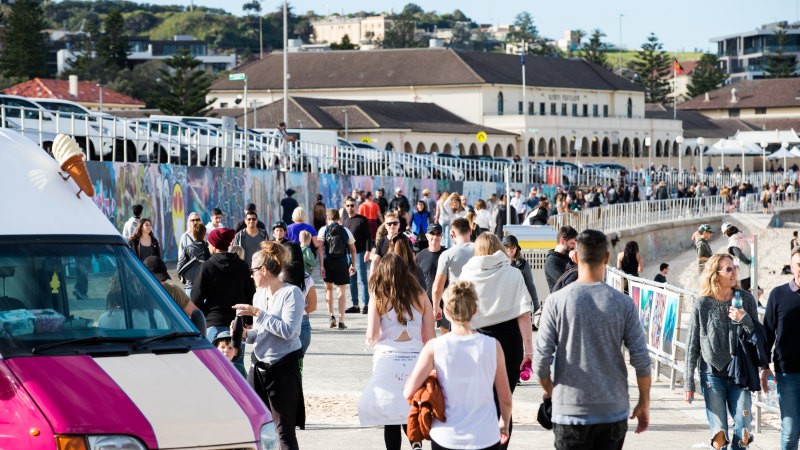 NSW Health on Sunday urged people to avoid non-essential travel and social gatherings and consider wearing masks if they cannot socially distance as the rate of community transmissions rise.

Professor McCaw likened the Crossroads Hotel cluster in south-west Sydney to the breakdown in hotel quarantine in Melbourne – a single seeding event that could start another wave.

“With the early case numbers in NSW, I am very concerned. People are mixing more. There is more potential for an escalation of epidemic activity in NSW,” Professor McCaw said.

“If it keeps going as it goes, they will require as much public health intervention as Victoria did – and it could be even more difficult, because NSW people could have to change their behaviour more than Victorians did and that’s a challenge to achieve the same level of control.”

He said “acting early will reduce the likely duration of a lockdown”.

A report by Professor McCaw’s team, released on Friday, shows on July 1, the average Victorian was seeing 5.9 people a day outside the house. In NSW, that number was 8.1, the report revealed.

Catherine Bennett, chair in epidemiology at Deakin University, said if an outbreak could happen in Victoria, it could happen anywhere.

“The potential for spread is greater in NSW than Victoria. If this scenario had happened in NSW rather than Victoria, we might be a worse position than where we are now,” Professor Bennett said.

The Premier’s office did not respond to questions about complacency around social distancing, or whether further lockdowns or compulsory mask wearing were likely.

In a video message on Sunday, NSW Health’s Deputy Chief Health Officer, Jeremy McAnulty, called on residents to “redouble their efforts to stop the virus spreading”.

“People are urged to avoid non-essential travel and gatherings. Of particular concern is transmission in venues such as hotels and restaurants, the gym and social gatherings,” Dr McAnulty said.

He also said people should consider wearing masks if they are unable to socially distance.

Victorian Premier Daniel Andrews announced it would be mandatory to wear a mask in Melbourne from Wednesday, as the state recorded 363 new cases of coronavirus and three deaths on Sunday.

Dr McAnulty’s warning follows dozens of people facing $1000 fines after police broke up a house party in Sydney’s north-west on Saturday night. More than 60 people were at the party.

The maximum number of guests allowed at a home is 20 people under the Public Health Order, although NSW Health is recommending no more than 10 people at a home gathering.

NSW Health said one locally acquired case reported on Sunday went to Holy Duck! restaurant in Chippendale, in inner Sydney, on July 10 between 7.15pm and 9.30pm.

The restaurant was closed for cleaning on Saturday night and all close contacts are being identified.

Another case visited the Anytime Fitness Gym in Merrylands on July 14 from 9pm to 10.30 pm.

Sunday’s cases also included one person linked to the Crossroads cluster who went to Planet Fitness gym at Casula, bringing the total number of cases linked to the hotel to 45.

There were also four people who visited the Thai Rock restaurant in Stockland Mall Wetherill Park, and a close contact of one of those cases. There are now eight cases linked to the restaurant.

Also over the weekend, Our Lady of Lebanon Maronite Catholic church in Harris Park closed for cleaning after a parishioner tested positive.

The parishioner visited the western Sydney church last Wednesday at 5.30pm, Thursday at 6pm and Friday at 1.30pm and 6pm.

As students return from their winter break on Monday, NSW Education Minister Sarah Mitchell said all public schools, including in south-west Sydney, would open as planned.

“Schools will be operating as planned for term three,” Ms Mitchell said.

With as many as 200,000 students likely to use public transport from Monday, the Transport Minister Andrew Constance warned there was an “inherent risk associated with commuting”.

“The state’s at a critical juncture. There is no room for complacency, in fact, complacency in the middle of this pandemic can kill,” Mr Constance said.

He urged people to consider commuting in different ways, such as walking or cycling and encouraged parents to drive their children to school.

Thousands of extra services will continue to run but Mr Constance said people should time their journeys to avoid overcrowding, particularly at peak times.

NSW Labor has urged the Berejiklian government to update the public on the state’s stockpile of personal protective equipment after Victoria said masks would be compulsory in public.

The Opposition’s health spokesman Ryan Park said: “We saw during the first wave of the pandemic that there simply wasn’t enough PPE to protect health workers in our hospitals and aged care facilities. The government can’t allow this to happen again.”

Alexandra Smith is the State Political Editor of The Sydney Morning Herald.

Megan Gorrey is the Urban Affairs reporter at The Sydney Morning Herald.

Don't Miss it Coronavirus Live News Updates: Around 84% of Delhi Police personnel recovered from COVID19
Up Next US coronavirus: America broke its single-day record of new cases at least 9 times in a month