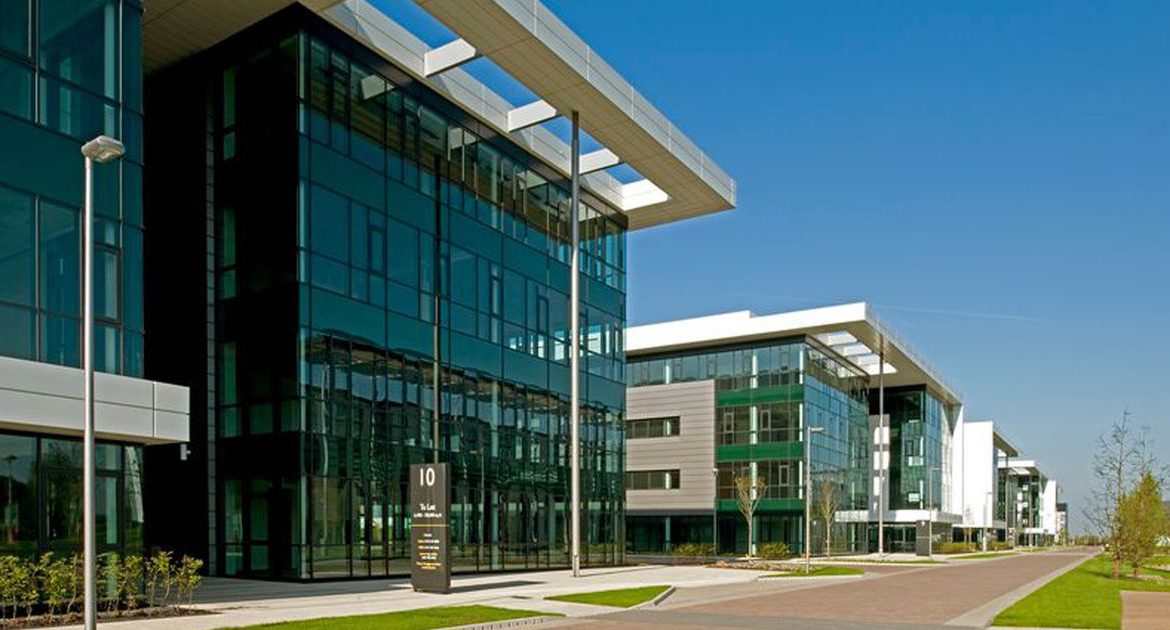 A Scots call centre worker has told how at least four people have tested positive for Covid-19 after an outbreak at a contact tracing centre.

The 19-year-old was employed at the Sitel building in Maxim Park, near Motherwell, alongside as many as 200 other people before it was locked down by management.

The teenager, who worked for Virgin Media on the upper floor of the building, discovered there was a cluster of cases after arriving for work on Saturday.

The Sitel call centre in based in Maxim Business Park, Motherwell

A number of workers from the contact trace team, who worked on the ground floor where they carried out coronavirus tracing on behalf of the Department of Health and Social Care, have been infected with the virus the girl claims.

She believes that there were not enough safety measures put in place by the call centre giant and that her team were freely able to move throughout the building.

The whistleblower, from East Kilbride, is now awaiting her own test result and fears it may also be positive.

She said: “This is the most hypocritical thing ever, for the place to get it to be the Track and Trace people.

“Basically the only precautions Sitel had taken were sending half the people to work from home. But they then brought more staff in anyway.

“There’s like half a desk between each desk for social distancing but at break and lunch, everyone sits at the same tables and we all walk out the same door.

“There’s one social distancing ambassador but I’ve not seen him for a few weeks – I think he’s on holiday.

“It’s not been organised well at all. You can wear a mask and gloves if you like but in all honesty, I’ve only seen one woman doing it the whole time.

“The Track and Trace people weren’t allowed up the stairs but the Virgin Media people were allowed to go downstairs to the other place. But that was to do with data protection.

“I’m told that they’ve now closed the whole building until Tuesday to do a deep clean. They’re also saying that you’re not allowed back into the building until you’ve been tested.”

The customer adviser first heard about the outbreak on Saturday morning when she arrived for work and found everybody standing outside the Eurocentral hub.

She said: “I thought it was a bit strange and that there was maybe a fire drill or something but that 8am was a bit early to be having one.

“Someone said that someone had tested positive for Covid. I work on the second floor so I was able to go in because just the first floor was evacuated.

“Every other floor was allowed in. Everyone got a bit anxious and then it came out that there were four people who had tested positive but it could be as many as six.

“Someone who works with me went and got tested and they’ve come back positive. I’m still waiting on my results but I just have a feeling that I’ve got it.”

The teen claims she received little support when she asked for guidance from her manager following the outbreak, which is believed to have started on Wednesday.

She added: “I went and spoke to a manager yesterday and asked if the rumours were true and someone had tested positive. They said yes.

“I asked what I should do and if I should go and get tested. Her words to me were that this is a learning curve and I’d be fine unless I was contacted by Track and Trace.

“I actually turned round and asked what she had said because I couldn’t believe it. She said they should have been social distancing.

“A guy was off on holiday for two weeks but came back on Wednesday and then went off after that.

“So it was on Wednesday basically that it started spreading. I was sitting in shock.

“I was breaking my heart asking what to do because I’ve got virus induced asthma. I was using my inhaler all day yesterday as well.”

Labour MSP Monica Lennon said: “Any potential cluster cases of COVID-19 are a cause for concern and it’s right that an investigation is swiftly underway.

“Contact centres, like Sitel in Lanarkshire, have been named and shamed for their treatment of staff, when many of them could have worked from home.

“It’s shocking that seven out of ten contact centre workers in Scotland felt very scared at work during lockdown, according to research by the University of Strathclyde.

“We need a robust Test and Protect system and sanctions against bad bosses who put public health at risk.”

NHS Lanarkshire have confirmed they are investigating “a number of potentially lined cases” and that they had put “immediate measures” in place to reduce the risk to others.

A Scottish Government spokesperson said: “We are aware that contact tracing is underway following detection of a small number of potentially linked cases in North Lanarkshire.

“Where potential clusters of cases develop we must find them and act quickly to prevent further spread and we are grateful to local partners for their swift response.

“We are monitoring the situation and will support partners in containing this outbreak.

“A small increase in the number of cases is not unexpected as lockdown is lifted and that is why it is essential that people follow the rules with regards to contact tracing and leaving contact details when asked.

“This matter highlights how essential it is for people to follow FACTS, and ensure social distancing at all times.”

An NHS Test and Trace spokesperson said: “We are aware of a local outbreak of Covid-19 at the Sitel site in Motherwell. This is being managed by Sitel and colleagues in NHS Lanarkshire, who are following appropriate test and protect action in line with Scottish Government advice.

“We take the safety and wellbeing of our staff very seriously. Everyone at the site is currently working from home while a deep clean takes place, and will be offered a test within the next 24 hours.”

Sitel and Virgin Media have been contacted for comment.