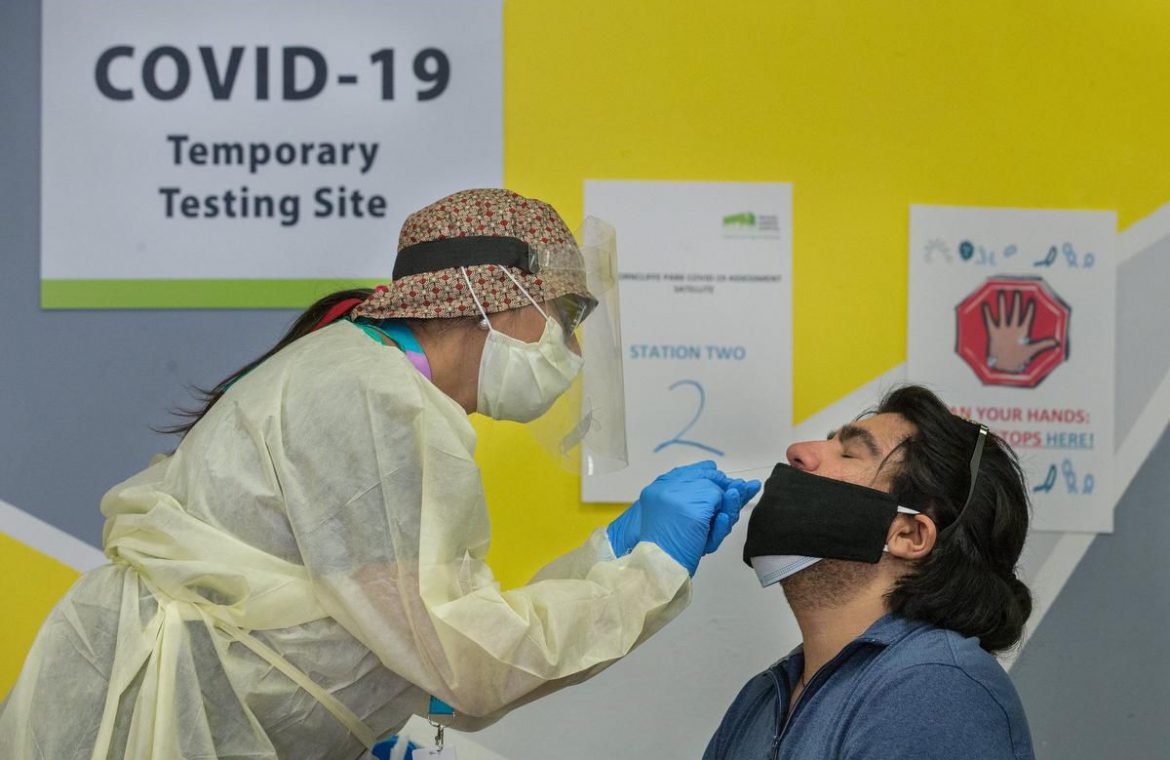 The Ontario Council of Hospital Unions, a division of the Canadian Union of Public Employees, says it does not want the province’s emergency order extended in its current form because it suspends their collective bargaining agreement.

The Progressive Conservative government introduced a bill two weeks ago that would allow it to keep some emergency measures in place in the months ahead.

The union says that without the CBA in place they have no workplace rights, including having the time and location of shifts changed without notice or vacations cancelled.

Union president Michael Hurley argues that while those measures were acceptable at the start of the pandemic the emergency is over in most of Ontario.

The union’s membership voted in favour of further political protest actions last night unless the bill is amended.

Health-care workers in Ontario do not have the right to strike and have a very limited right to refuse unsafe work.

7:22 a.m. Nearly a quarter of the residents in India’s capital New Delhi have had the coronavirus, according to a sero-prevalence study conducted by the country’s disease control organization.

With a population of more than 11 million, New Delhi has so far reported 123,747 confirmed cases and 3,663 deaths. The study conducted by the National Center for Disease Control found that 23.48 per cent of the 21, 387 blood samples tested showed the prevalence of IgG antibodies.

The samples were collected between June 27 through July 10 across the city’s 11 districts. The tests help in the identification of the presence of antibodies in the general population. The study did not provide any gender or age-related details of the population sample tested.

Even as the spread of virus has been contained in the city, a significant proportion of the population is still vulnerable, according to the health ministry statement.

The South Asian country added 37,148 cases on Tuesday taking the tally more than 1.15 million, according to data shared by India’s health ministry. It’s only trailing the U.S. and Brazil now.

5 a.m.: In just four days, Torontonians were supposed to join the rest of Ontario in moving to Stage 3 of the province’s economic reopening. But with COVID-19 cases on the uptick, those plans have been put on hold.

Toronto, Peel Region and Windsor-Essex will remain in Stage 2, while Hamilton and the rest of the GTA will move to Stage 3 as planned on Friday.

Premier Doug Ford said the numbers in these regions are not where they should be, and that the possibility of Stage 3 beginning July 31 for these areas will be revisited next week.

Toronto business owners say the delay comes as no surprise.

Jason Ching, co-owner of Omai Restaurant in Toronto, said he wasn’t planning to allow indoor seating Friday even if he had the go-ahead.

“I think we’re more comfortable doing that than having people sit inside,” he said.

4:41 a.m.: Lebanon’s health minister says the financially troubled Mediterranean country, which has so far managed to contain the coronavirus, is sliding toward a critical stage with a new surge in infections after lockdown restrictions were lifted and the airport reopened.

The recently recorded double and triple digits of new infections were coupled with an increase in untraceable cases, raising concerns that a dangerous spread in the community could follow, Minister of Health Hamad Hassan told The Associated Press.

Lebanon’s early lockdown and strict measures to contain the virus were praised for slowing down the initial spread of the pandemic. Authorities have also aggressively tested, carried out random tests, and swiftly isolated infected areas.

But Lebanon’s crippling economic and financial crisis has proven more difficult to manage. In late April, the authorities began gradually easing weeks-long restrictions that threw tens of thousands out of work; Lebanon’s only airport reopened on July 1.

So far, Lebanon has recorded more than 2,900 infections and 41 deaths, including one front-line doctor who died Monday at a hospital in the south, two weeks after contracting COVID-19. Hassan said the late diagnosis is to blame for the death of the 32-year-old physician. Some 150 medical staff have been infected, only a few of them becoming sick.

Andrews said a lockdown in Australia’s second-largest city Melbourne, which began two weeks ago, was having an impact.

“You’d like to see numbers coming down. At the end of the day though, we’re not seeing the doubling and doubling again” of cases, Andrews said. “So what that says to me … is that the sorts of measures we’ve put in place are having a direct impact.”

Face masks will become compulsory from Thursday for residents in lockdown regions when they leave their homes.

Monday 10 p.m. COVID-19 has led to the deaths of 13 nuns at a convent in Michigan in the last three months, religious officials report.

A dozen members in the Congregation of the Sisters of St. Felix of Cantalice, or Felician Sisters, died after battling the virus between Good Friday on April 10 and May 10, while a 13th associated death was reported on June 27, according to the Global Sisters Report released Monday. The nonprofit outlet is a project of the National Catholic Reporter publishing company.

The Detroit Catholic, another publication that covers the Catholic community in southeast Michigan, reported that as many as 22 sisters at the Presentation of the Blessed Virgin Mary Convent had tested positive for the coronavirus through early May.

The nuns at the 360-acre campus, who ranged in age from 69 to 99, included teachers, a librarian and a secretary in the Vatican Secretariat of State, the Global Sisters Report said.

Meanwhile, at least 19 other sisters have died in the United States during the pandemic, according to the article, which said the Livonia deaths “may be the worst loss of life to a community of women religious since the 1918 influenza pandemic.”

Representatives with the Felician Sisters of North America did not immediately respond to a request for comment Monday.

Monday 5:34 p.m.: Ontario has seen another day with no new COVID-19 deaths, according to the Star’s latest count.

As of 5 p.m. Monday, Ontario’s regional health units reported 39,817 confirmed and probable cases of COVID-19, including 2,785 deaths, a jump of 160 reported infections since Sunday evening.

The last time the units did not report a fatal case in 24 hours was on July 6; before that, the province had seen 14 consecutive days with at least one reported death. In late April and early May, the health units reported as many as 94 deaths in a single day.

Don't Miss it By bike, boat and horseback: Epic coronavirus journeys home
Up Next California went from bending the curve to a major coronavirus surge. What happened?