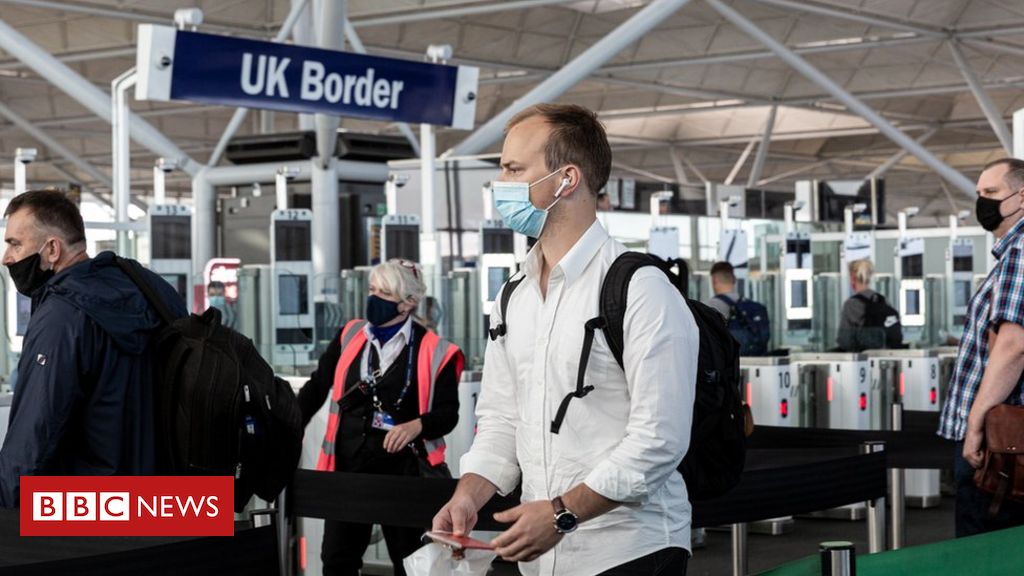 A backlog of more than 400,000 passport applications has mounted due to disruption caused by the coronavirus pandemic, figures show.

She said steps were being taken to increase capacity after travel restrictions were eased.

But those applying may have to wait longer than the usual three weeks.

Asked how long it would take to clear the backlog, Transport Secretary Grant Shapps told BBC Breakfast he did not know – “it’s not quite my area”, adding that the Home Office was working hard to clear it.

The Passport Office is advising only people going away before September or those travelling on compassionate grounds should apply now for a passport.

In a written Parliamentary answer about the backlog, Baroness Williams said the Passport Office “continues to operate at reduced staffing levels so its people can continue to socially distance”.

She added: “It is therefore taking longer than usual to process passport applications.

“As part of its contingency arrangements, HM Passport Office is rapidly increasing its capacity for processing passport applications, in line with public health guidance, which will help to ensure it continues to meet the travel needs of its customers.”

“It’s desperate,” says Adrian Haines, from Crawley, who is fast running out of time to renew his son’s passport.

On Saturday, 16-year-old Jonathan’s mum, Madalen, 49, died of a heart attack in France as she was preparing a holiday home for guests.

Now Adrian, who is separated from Madalen, is doing everything he can to get his son to his mother’s funeral on Friday.

“I sent the passport people an email on Sunday night, I phoned them Monday morning, I eventually got a call back midday, the guy took all my details for processing an emergency passport – I don’t think he realised the urgency.

“I had a gut feeling this was going nowhere, so I put a plea on my Facebook and contacted my MP, Henry Smith.

“He assured me he’d do absolutely everything he could.”

Still waiting for promising news, Adrian has rebooked the Eurotunnel twice and is considering travelling tonight, with only the out-of-date passport, to try to give Jonathan the chance to see his mother’s body.

“Thursday is the last time that my son can see his mum,” he says, choking up.

The minister pointed out a further 284,000 applications would “need to be worked through in the coming weeks once initial documentation has been received and allocated”.

This represented an increase of 172% from last year, she said.

Baroness Williams disclosed the scale of the passport backlog in a response to a question by Labour over the delays.

The relaxation of Foreign Office guidance on non-essential overseas travel and quarantine rules earlier this month has paved the way for foreign holidays to destinations including Spain, Germany, France and Italy.

Those applying for new passports will be among the first to receive a blue version, introduced from April after 30 years, following the UK’s departure from the European Union.

Still no passport? What you can do

If your passport does not arrive within three weeks of applying, you can track its progress and receive an email with its status.

Urgent passports are currently only being issued on compassionate grounds or for work travel, for example those travelling on government business.

There are no face-to-face appointments due to the pandemic but people can call the passport advice line on 0300 222 0000 to get guidance.

MoneySavingExpert.com advises asking your holiday provider if they will move your holiday to show “forbearance” though they are not obliged to.

Or, if you have only paid a small deposit, it may be worth cancelling and not paying the remaining balance if you do not think your passport will arrive in time, the website says.

Have you applied for a UK passport recently? Do you urgently need to travel? Email us at haveyoursay@bbc.co.uk.