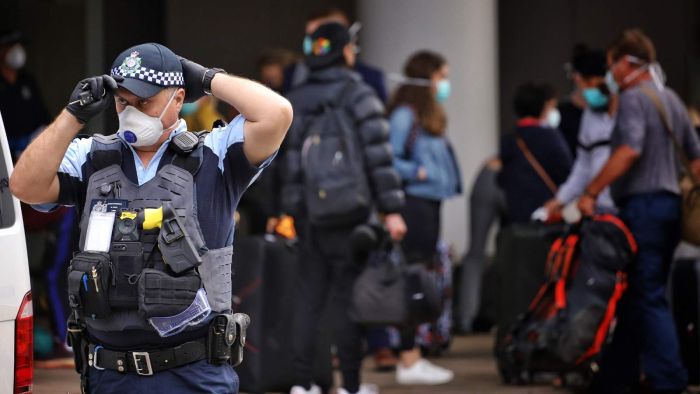 More than 200 people who were meant to be isolating at home under strict coronavirus quarantine laws in Queensland are missing.

Key points:Since April, Queensland police have found 400 people were not where they were supposed to be isolating185 people gave officials the wrong address and 25 others weren’t at the address they gave police210 people remain unaccounted for and face hefty fines if they’re caught

Since mid-April more than 2,000 compliance checks have been conducted by the COVID-19 taskforce, with officers uncovering almost 400 people were not where they were supposed to be.

Of those flouting the rules, 185 had given health officials false contact details, including addresses where they were alleged to have been isolating at.

Another 25 people had given authorities the correct information but when police visited they were nowhere to be found.

Police said 210 people remained unaccounted for and were wanted for questioning.

If found, they are likely to face hefty fines for breaking the stringent stay-at-home laws in place to curb the spread of the virus.

Of the remaining people not abiding by the self-quarantine rules, police confirmed 125 people had left the state during the period they were subject to the orders.

Seventeen people were found at different addresses to the ones they had listed but had avoided penalty due to personal circumstances such as an expired lease or family problems.

For the latest news on the coronavirus pandemic follow our live coverage.

Police have confirmed these people were still required to self-quarantine, but were given new orders with alternative addresses.

A further 35 people were discovered elsewhere and fined by police.

Police have stressed that the number of people found to be doing the wrong thing was low, but said those who did not adhere to the strict stay-at-home rules were putting the community at risk.

The new figures come one day after a man was fined more than $4,000 for trying to sneak across the Queensland border hiding in the boot of a car.

Police caught the man, who had been travelling with two women, attempting to get through a checkpoint in Wallangarra in the Southern Downs.

All three were banned from entering the state.

‘Lock them out of Queensland’ Queensland police have confirmed 210 people are wanted for questioning over coronavirus quarantine breaches.(ABC News: Chris Gillette)

Queensland Police Union president Ian Leavers said those disappearing from self-quarantine who are found to have given police false information, should be banned from the state.

“What they’ve done is put our state at risk and not only the safety of our people but also the economy, it goes hand in hand so my view is, let’s look at changing legislation and deport them to New South Wales, they don’t deserve to be here,” Mr Leavers said.

He said he doesn’t envisage a taskforce will be created to track down those who are missing, but if police do find them, they should be forced to leave Queensland.

“Get rid of them, they shouldn’t be here, it’s unacceptable,” Mr Leavers said.

“This is really serious and we’ve got to get fair dinkum about this and if that means, people want to lie, let’s increase those penalties and if we can, let’s lock them out of Queensland.

“If you want to enter Queensland, it’s a privilege, it’s not a right you will follow the laws of the land.”

Since July 10, more than 10,000 people have been penalised for failing to comply with the COVD-19 border direction.

Don't Miss it Airline chiefs urge Covid-19 testing on transatlantic flights
Up Next Trump warns U.S. coronavirus outbreak will probably ‘get worse before it gets better’