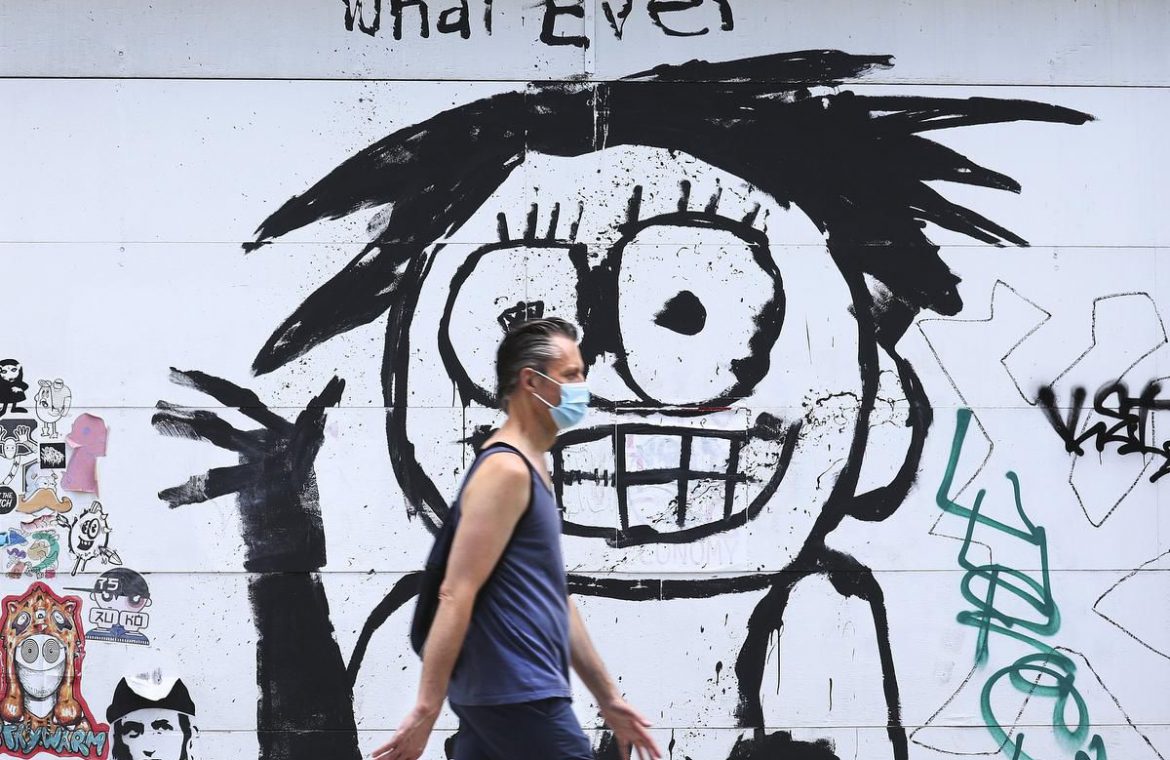 7:45 a.m. Tokyo Governor Yuriko Koike told residents to avoid unnecessary trips outdoors as much as possible during a forthcoming four-day weekend as the total number of coronavirus cases in the city topped 10,000.

Japan’s capital had another 238 cases on Wednesday, as the country heads into a long weekend that was originally scheduled to celebrate the start of the now-postponed Tokyo Olympic Games.

“This long weekend is going to be critical in preventing further spread of the virus,” Koike said in a briefing Wednesday.

Hospitalizations in Tokyo have jumped almost five-fold over the past month, though authorities have stressed the medical system is not under stress. Just 14 of those hospitalized are listed as serious cases, in an ICU or on a ventilator, and the city has had only two deaths in the past month. The city had over 3,800 cases so far this month, more than the previous peak in April when the city entered its state of emergency.

7:41 a.m. The government has quietly relaxed a requirement to fingerprint prospective new federal hires as part of security screening, a move prompted by the need for physical distancing during the COVID-19 pandemic.

A temporary change to the federal standard on security screening allows departments and agencies subject to the Policy on Government Security to grant conditional security statuses and clearances, the Treasury Board Secretariat said.

The government must ensure it can effectively respond to public needs during COVID-19 by hiring badly needed workers, the secretariat said.

“This has required urgently increasing the workforce necessary to implement the government’s emergency measures and to provide support where urgently needed, like health-care workers in Indigenous and northern communities.”

The secretariat said that given the physical distancing practices recommended by the Public Health Agency of Canada, it is “not always possible to obtain fingerprints,” a common step in carrying out a criminal record check during screening.

The decision to grant a conditional security screening clearance under the temporary change in practice is the responsibility of the deputy head within each department or agency, based on individual circumstances.

Agencies continue to “diligently assess” candidates using security screening measures in a manner that does not present a public health risk, the secretariat said.

“This includes, for example, verifying a candidate’s identity and background, information, education and professional credentials and performing a credit check.

“This may include conducting name-based checks for law enforcement inquiries as an alternative to using digital fingerprints or extending the validity of existing screening levels that are due for revalidation during this period.”

All candidates for employment with the government are also required to self-declare the existence of a criminal record on the security screening application form.

4 a.m. Finance Minister Bill Morneau will appear Wednesday before a House of Commons committee that is probing a cancelled agreement for WE Charity to run a student-volunteer program.

Morneau has apologized for not recusing himself from the cabinet discussions and vote on the agreement, given his daughters have ties to WE — including one who works in an administrative arm of the organization.

He will be the latest cabinet minister to be grilled over the aborted deal that would have seen WE receive more than $43.5 million to oversee a program with a budget of up to $912 million.

Morneau, like Prime Minister Justin Trudeau, is being investigated by the federal ethics watchdog for possible violations of conflict of interest rules.

On Tuesday, Canada’s top bureaucrat said he couldn’t see not having the finance minister and prime minister involved in discussions about a program as big in scope and price as the Canada Student Service Grant program.

The program proposed paying students up to $5,000 toward education costs based on the number of hours they volunteer.

The Liberals have said the non-partisan public service recommended going with WE as it was the only organization in the country to administer a program as quickly and as broadly as what the government wanted.

In early July, the organization handed back control of the program to the government amid the controversy about its connections to Trudeau. The organization has paid speaking fees to his mother and brother.

The finance committee also heard Tuesday from the head of the Public Service Alliance of Canada that public servants could have delivered the program, while lawyer Joshua Mandryk raised concerns about effectively paying students below minimum wage and calling it volunteering.

The Canadian Federation of Students is calling on the government to abandon the program and push all the money into an emergency benefit for out-of-work students.

The group warns students may be unable to accumulate enough hours to receive grants because it’s almost August and there is no clarity on when the program will launch.

“Students have waited for this program to roll out since April and now they’re told they have to wait even longer,” national chair Sofia Descalzi said in a statement.

Wednesday 5:15 a.m.: The delayed Tokyo Olympics could not be held next year if conditions surrounding the coronavirus pandemic continue as they are, the president of the organizing committee said Wednesday.

In an interview with Japanese broadcaster NHK, Yoshiro Mori said he was hopeful the situation would improve and suggested a vaccine was the key.

“If this kind of situation (with COVID-19) continues, is it possible to hold the games?” Mori was asked by NHK.

The Tokyo Olympics are scheduled to open on July 23, 2021 — a year from Thursday. A small, 15-minute ceremony without fans is scheduled for Thursday at the new national stadium to mark the date.

The province passed the 40,000-case mark with 188 new infections reported in the last 24 hours, the most in any single-day so far this month.

Earlier Tuesday, the province reported 120 patients are currently hospitalized with COVID-19, including 36 in an intensive care unit, of whom 23 are on a ventilator — numbers that are near the lowest the province has reported since first publishing hospitalization data in early April.