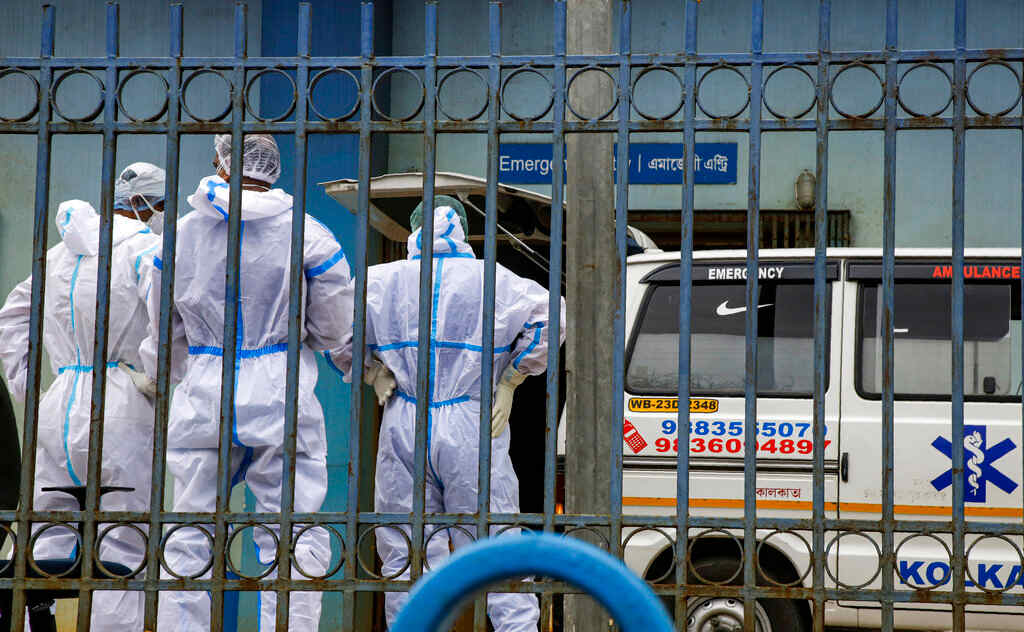 Coronavirus LIVE Updates: Govt approved an ordinance through which a penalty up to Rs 1 lakh and a jail term up to two years can be imposed against those not wearing masks and violating lockdown

Coronavirus LATEST Updates: Govt approved an ordinance through which a penalty up to Rs 1 lakh and a jail term up to two years can be imposed against those not wearing masks and violating lockdown.

As many as 84 personnel have been tested positive at the Raj Bhavan in Chennai. As per a statement, a few persons showed symptoms following which tests were carried out 147 persons working at the premises.

The West Bengal has to impose total lockdown in the entire state on two days every week till August. The shutdown would be clamped on Thursday and Saturday this week.

While laying the foundation stone of the Manipur water supply project via videoconference Prime Minister Narendra Modi said, ‘Till the time vaccine is developed, we have to vigorously fight against coronavirus.’

Researchers are making ‘good progress’ in developing vaccines against COVID-19, with a handful in late-stage trials, but their first use cannot be expected until early 2021, said a WHO expert.

As many states in India reported record jumps in daily coronavirus cases on Wednesday, lockdown restrictions of different durations were clamped in Bhopal, Kashmir Valley and in Manipur.

In Maharshtra, the country’s worst-affected state by COVID-19, the daily rise in cases surpassed 10,000 for the first time. Tamil Nadu, which is placed second nationally, reported an all-time single-day high of 5,849 fresh infections, whereas cases neared 5,000 in Karnataka, a day after the state’s chief minister said that there will be no extension of lockdown in the state.

According to the Union health ministry, India’s total COVID-19 cases rose to 11,92,915 while the toll reached 28,732. However, amid the rising cases, on Wednesday, India’s recovery rate improved to 63.13 percent as a record number of over 28,000 people were discharged in a day.

Meanwhile, in norhteastern state Manipur, where cases with no travel history were found to be COVID-19 positive, the govt announced 14-day curfew-like restrictions from Thursday afternoon in order to control the spread of the virus.

Similar restrictions will be in place in Bhopal for 10 days, the Madhya Pradesh govt said, while the Kashmir Valley has been placed under complete lockdown for six days starting from today evening.

In Delhi, health minister Satyender Jain announced that a fresh sero-survey will be conducted next month after the results of the previous round showed that 23 percent of Delhi’s population had been infected with the virus.

Down south, Kerala chief minister Pinarayi Vijayan said the government will “seriously consider” suggestions coming from experts to re-impose a lockdown as the state recorded over 1,000 cases in a single day for the first time since the outbreak.

The Jammu and Kashmir administration imposed a six-day complete lockdown in all of Kashmir Valley, except for Bandipora district, following a spike in the number of COVID-19 cases in the last three weeks.

“Complete lockdown in all Red districts (excluding Bandipora) of Kmr (Kashmir)Div (Division) from today evening till 6 am on 27-7-2020,” the Jammu and Kashmir administration’s Department of Information and Public Relations said on Twitter.

The lockdown came into effect on Wednesday evening as the Valley recorded 502 new cases.

During this period, agriculture, horticulture and construction activities will continue in accordance with disaster management guidelines, and the movement of goods carriers, LPG and oil tankers will also be allowed.

The decision to impose restrictions will be reviewed after six days, officials told news agency PTI.

The Valley has faced the brunt of COVID-19 in the newly formed Union Territory, accounting for 243 of its 263 deaths and 5,263 of the 6,540 active cases. The highest single-day spike was on Monday when 751 COVID-19 cases were recorded.

In Madhya Pradesh, Home Minister Narottam Mishra announced that a lockdown will be imposed in Bhopal for ten days from 8 pm on 24 July. The announcement came as Bhopal reported the highest number of cases at 157 in the state, taking its total case count to 4,669 and toll to 144.

Chief Minister Shivraj Singh Chouhan assured that the supply of essentials will continue through the lockdown and asked people to follow rules and take adequate precautions.

Like in earlier lockdowns, e-passes will be required to travel to and from Bhopal, said Mishra. The next cabinet meeting will be held through video conferencing, he added.

Manipur chief minister N Biren Singh, in a press conference, announced that curfew-like restrictions will be imposed for 14 days across the state beginning 2 pm on Thursday. He said the decision was taken at an emergency cabinet meeting held in the evening.

Singh said that it is a matter of concern that people with no travel history were found to be COVID-19 positive in Thoubal district while asserting that it is too early to state that local transmission is taking place. A seven-day curfew was imposed in Thoubal on Tuesday to deal with the situation in the district.

He also that noted 63 personnel of the Central Reserve Police Force (CRPF) tested positive for the disease after coming to the northeastern state from other parts of the country. People’s reluctance to follow the COVID-related protocols further compounded the need to impose restrictions, he said.

Essential services will be exempted from the purview of the restrictions and “time-to-time” arrangements will be made by involving the home and health departments to make sure that people get their daily needs, said Singh while warning of strict action if the rules were not followed.

The state Cabinet also resolved to engage 100 doctors, 90 nurses and 60 multi-tasking staff for six months to work at different COVID-19 care centres. “Our priority is to save lives,” Singh said.

Chhatisgarh’s capital Raipur wore a deserted look on Wednesday as a week-long lockdown began in the municipal limits of Raipur and Birgaon.

“Raipur district recorded 1,314 COVID-19 cases till Tuesday. Of these, around 1,100 cases were detected in the last one month. Therefore, areas under the Raipur Municipal Corporation and Birgaon Municipal Corporation of the state capital have been declared as containment zones where restrictions will remain in force for seven days to break the chain of virus transmission,” a public relations department official told PTI.

Lockdown is also being enforced in 20 other urban bodies in four districts of the state, including Mungeli and Durg, for different time periods, the
official said.

As Kerala reported 1,038 fresh COVID-19 cases, the highest- single day addition of patients, Chief minister Pinarayi Vijayan said that the government will look into imposing a total lockdown, as has been suggested by some experts. “Such demands have come from various quarters. We have not taken any decision yet. We will seriously consider it,” he said.

Kerala’s infection count rose to 15,032 on Wednesday while the toll climbed to 45 with a 75-year-old man from Idukki succumbing to the viral infection.

While the situation remained grim in the state capital, which has the highest number of 2,421 cases, the virus was spreading rapidly in Aluva at Kochi, prompting authorities to impose curfew there and nearby panchayats, the chief minister said, stressing that there was a need to be more cautious.

Maharashtra reported the highest single-day jump of 10,576 COVID-19, which pushed its overall tally to 3,37,607, the state health
department said. The state’s toll due to the virus went up by 280 and reached 12,556, it said. A total of 5,552 patients were discharged from
hospitals during the day, taking the number of recoveries in the state to 1,87,769, the department said in its statement.

Tamil Nadu  reported an all-time single-day high of 5,849 fresh infections, taking the case count to 1,86,492, while the toll rose to 3,144 with 74 more succumbing to the disease. The daily bulletin stated that of the total fatalities, 444  were notified on Wednesday after a report was submitted by the death reconciliation committee constituted by the state government

On a positive note, recoveries also rose to 1,31,583 with 4,910 people getting cured, the state health department said.

The COVID-19 toll in West Bengal mounted to 1,221 after the highest single-day spike of 39 fatalities, the health department said. The state also witnessed a record 2,291 fresh infections, pushing the tally to 49,321, it said in a bulletin. The number of active cases in the state stands at 18,450.

Karnataka also reported the biggest single-day spike of 4,764 new COVID-19 cases and 55 fatalities, taking the total number of infections to 75,833 and the toll 1,519, the state’s health department said. The day also saw a record 1,780 patients getting discharged after recovery. Out of the 4,764 fresh cases, a whopping 2,050 were reported from Bengaluru urban alone.

In its morning update, the Union health ministry said that the country registered 37,724 COVID-19 cases since 8 am on Tuesday, pushing the overall case count to 11,92,915 while the toll rose to 28,732 with 648 fatalities. A record 28,472 patients recuperated from the disease in 24 hours, taking the recovery rate rose to 63.13 percent, the ministry said.

According to the ministry data updated at 8 am, recoveries have surged to 7,53,049 exceeding active cases of coronavirus infection by 3,41,916.

The case fatality rate has dropped to 2.41 percent from Tuesday’s 2.43 percent. It was 3.36 percent on 17 June, the ministry said in a statement.

Fresh sero-survey in Delhi in August

The decision comes after the city government analysed the results of the latest sero-survey which showed that nearly 23 percent of the people in the National Capital had been exposed to the novel coronavirus.

The national capital recorded 1,227 fresh coronavirus cases, a bulletin issued by the Health Department said, taking the tally  to over 1.26 lakh. Twenty-nine fatalities were recorded in the last 24 hours, taking the toll to 3,719, the bulletin said. The number of active cases was 14,954, down from 1 5,288 on Tuesday.

On the sero-survey, the minister said a strategy is being made for the next survey, and more samples will be taken than in the previous exercise.

“The results of the sero-survey conducted from 27 June to 10 July came out on Tuesday, and it shows that nearly one-fourth of people had developed antibodies, meaning they had got infected and recovered. Most of these people who were sampled did not know that they were infected earlier,” Jain told reporters.

Director of the National Centre for Disease Control (NCDC) Dr Sujeet Kumar Singh ahd said on Tuesday said that what the sero survey also shows is that the remaining 77 percent are still vulnerable to the viral disease and containment measures need to continue with the same rigour.

A sero-survey involves testing of blood serum of individuals to check for the prevalence of antibodies against infection.

Don't Miss it Global meth market continues to boom despite coronavirus and lockdowns |The World
Up Next ‘One for every 100 coronavirus cases’: why Australia should be bracing for more deaths