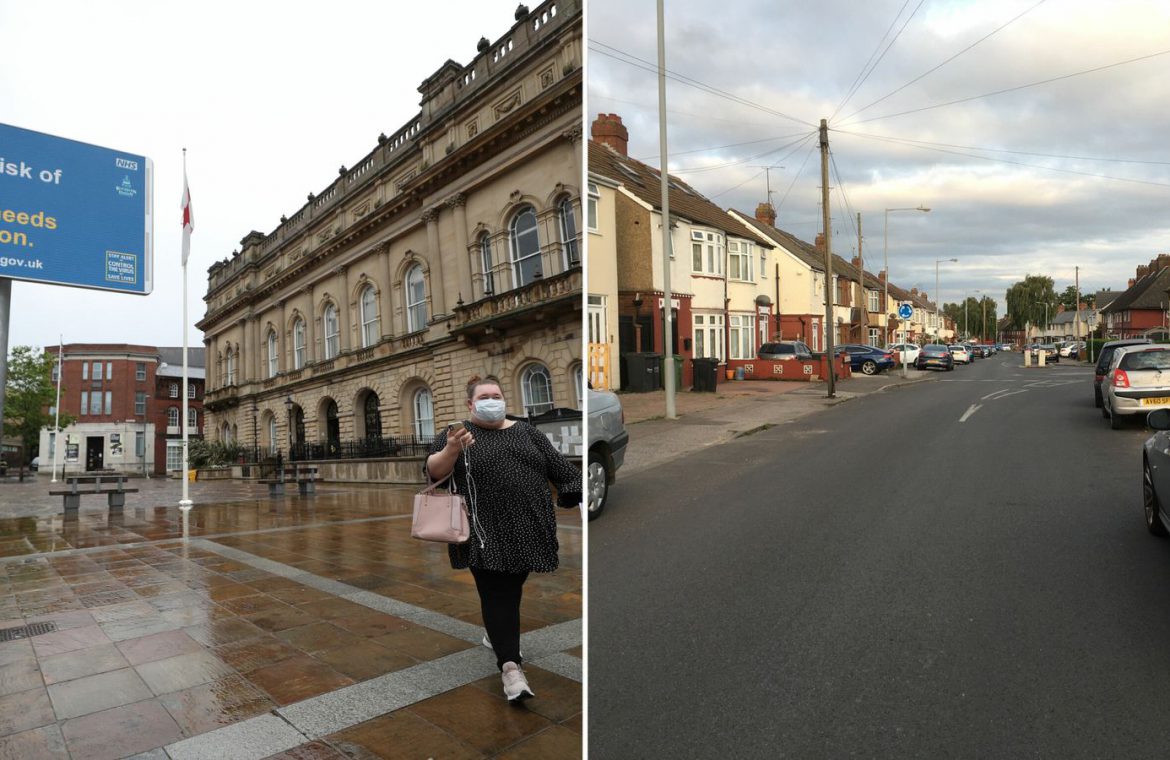 Two more English boroughs have joined Leicester in reaching the highest level on the coronavirus watchlist.

Luton, in Bedfordshire, and Blackburn with Darwen, in Lancashire, have both been designated as an “area of intervention” by Public Health England (PHE).

They are now both at the same level as Leicester and the Midlands city’s neighbouring Oadby and Wigston – the areas that were subject to the UK’s first full local lockdown as part of the government’s “whack-a-mole” strategy to deal with flare-ups in COVID-19 infections.

Image:
Luton and Blackburn and Darwen are now areas of intervention, according to PHE

However, a government source told Sky News not to expect Leicester-style lockdowns in Luton or Blackburn with Darwen.

Instead it is more likely that the national lifting of coronavirus restrictions – such as the reopening of gyms and leisure centres this weekend – would be delayed in these areas, the source said.

In new figures published on Thursday, Blackburn with Darwen had the highest rolling seven-day rate of new COVID-19 cases in England.

Image:
Leicester was subject to the first local lockdown

Earlier on Thursday, it was announced there had been 769 more coronavirus cases and 53 more COVID-19 associated deaths recorded across the whole UK within the last 24 hours.

It took the total number of confirmed cases to 297,146 and the number of deaths 45,554, although the true tallies are expected to be higher.

According to PHE, an area of intervention is one “where there is divergence from the measures in place in the rest of England because of the significance of the spread, with a detailed action plan in place, and local resources augmented with a national support”.

Government guidance states that, in areas of intervention, national officials could take over decision-making.

Measures that might be considered in such areas include closing certain businesses and venues, cancelling events, closing outdoor public areas, encouraging working from home, closing schools, and restricting travel for everyone but key workers.

Image:
A warning from the government is seen outside Blackburn Town Hall

Responding to Thursday’s announcement that is had become an area of intervention, Blackburn with Darwen Borough Council said it had already decided to delay the reopening of leisure facilities.

Cllr Mohammed Khan, the council’s leader, said: “We are very grateful to our communities for working with us.

“The increase in testing is helping to ensure that we are heading in the right direction with a reduction in positive cases and hospital admissions.

“We need to keep up the momentum with our strong prevention work so we agree its sensible not to relax the easing of restrictions at the moment to stop the spread.

“We have already decided to delay the opening of our council leisure facilities along with introducing other localised prevention measures.

“We feel that accelerating our control measures in this way will assist us to move out of having higher COVID rates even faster- we are grateful for the government’s help in our local plans on this.”

This included limiting two people from the same household visiting another household; urging residents to wear face coverings in all enclosed public spaces, including workplaces; urging people not to shake hands or hug; and increasing COVID-19 testing, including for those without symptoms.

Luton had not previously been on PHE’s watchlist, although officials had noted an increase in COVID-19 cases in the area.

Following meetings with government officials, Luton Borough Council also said on Thursday it would not reopen gyms, pools and other leisure facilities as planned on Saturday.

The council is also keeping play areas closed and telling people not to make social visits to other people’s homes.

It has urged residents in certain local postcodes to book a coronavirus test, even if they don’t have symptoms.

This includes areas where there is closely-packed terraced housing.

The council later said that the additional testing being made available at Downside Primary School was now full, but they were expanding testing capacity across the town with further details to be provided.

Hazel Simmons, the council’s leader, said: “Our main priority is to protect Luton and these measures only serve to underline the importance of doing just that.

“Please pass these important messages on to your family and friends and if you can, stay at home.

“Too many families and friends have lost loved ones and we must do everything we can to ensure more lives aren’t wasted unnecessarily.

“There has been too much heartache in the town for us to risk further anguish, pain and suffering.”

Image:
Residents around the Selbourne Road area of Luton have been urged to get COVID-19 tests

Last month, shops and schools in Leicester were forced to close again, while the reopening of pubs and restaurants did not take place in the Midlands city in line with the rest of England on 4 July.

Some lifting of restrictions in Leicester – including the reopening of schools and nurseries – will occur from Friday.

The council will also be given powers to reopen non-essential shops where it is deemed safe.

However, pubs and restaurants will remain closed and gatherings of more than six people still won’t be allowed.