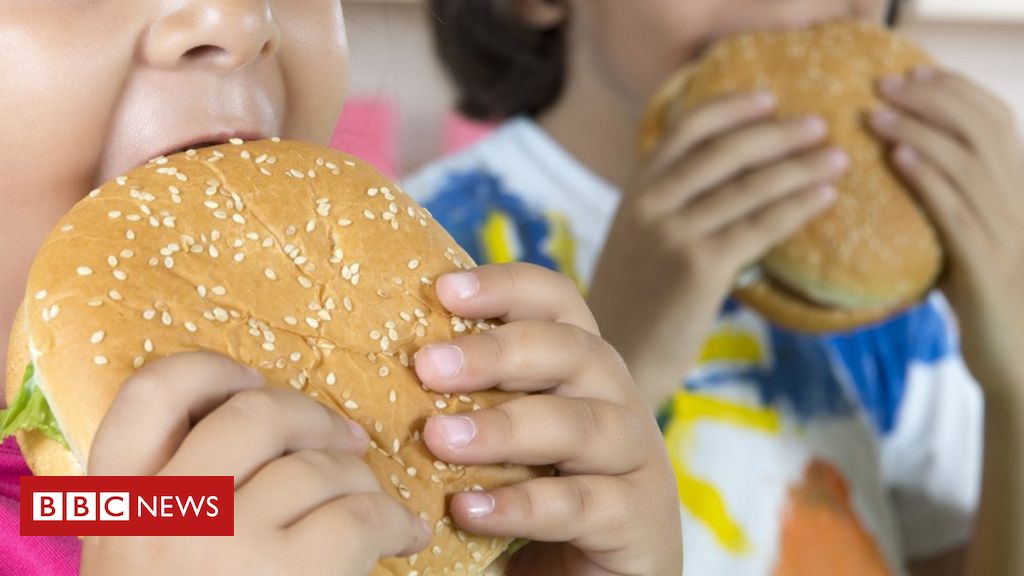 The prime minister is set to announce new measures to curb obesity next week, and they are expected to include a ban on TV junk food adverts before 21:00.

It comes amid growing evidence people who are overweight or obese are at greater risk from coronavirus.

The measures are yet to be finalised but are also likely to include a ban on online ads for unhealthy foods, and limits on in-store promotions.

But one food industry leader said the move was a “slap in the face”.

The move marks a change in stance by Prime Minister Boris Johnson, who has previously criticised levies on foods high in salt, fat and sugar – and described his views on tackling obesity as “libertarian”.

Mr Johnson’s experience in intensive care during his treatment for Covid-19 is thought to have contributed to his changing position.

Speaking during a visit to a GP surgery in east London, he said that while he was not normally one for “nannying or bossying”, the country did need to lose weight to protect from a second spike.

He said: “Obesity is one of the real co-morbidity factors. Losing weight, frankly, is one of the ways you can reduce your own risk from coronavirus.”

Obesity strategies have had a chequered recent history.

David Cameron, backed by NHS leaders, was all set to unveil wide-ranging curbs on food marketing and advertising in England in the summer of 2016. Then he abruptly left office and his successor Theresa May watered down or ditched most of the ideas.

Two years later she had changed her view, and her Health Secretary Jeremy Hunt announced plans to ban fast food advertising before the 21:00 TV watershed and prevent supermarkets from promoting unhealthy food products in stores.

These plans were put out to consultation but were left in limbo when Boris Johnson arrived in Downing Street a year ago.

His comments about the “continuing creep of the nanny state” and the need for a review of “sin taxes” were taken to mean he was against further intervention on people’s diet choices.

But he has shifted, and most of the 2018 plan now seems set to be implemented.

It could have been enacted by now but, whatever the timing, the measures – including sweeping changes to the way food is advertised, are a significant move to tackle one of the biggest health challenges of our times.

Ministers are still finalising the detail of some anti-obesity measures, such as whether to require more prominent labelling of food and drinks with high levels of sugar or salt.

Some restaurants could be required to put calorie labels on menus.

Proposals put forward, but not enacted, by Mr Johnson’s predecessor Mrs May are likely to be revived.

She consulted on whether to ban TV adverts for foods that are high in fat, salt or sugar during family viewing hours – and whether to restrict online advertising.

The proposals were widely resisted by advertisers and commercial broadcasters.

But it is thought Mr Johnson is likely to push ahead with advertising restrictions, and is considering banning in-store promotions of unhealthy foods.

Tim Rycroft, chief operating officer of the Food and Drink Federation, said the rumoured move was a “slap in the face” to the food industry, which he said had worked “heroically” to keep the nation fed during the pandemic.

“It is going to ban promotions of food 10 days before the chancellor launches the biggest food promotion the country has ever seen,” he told Today. “It is going to put enormous costs on the advertising industry and on broadcasters at a time when the economy is in quite a tenuous situation.”

A letter from the Institute of Practitioners in Advertising sent to the prime minister said a government impact assessment last year showed a 21:00 watershed on high fat, sugar and salt food and drinks would only remove around 1.7 calories per day from a child’s diet – the equivalent of half a Smartie.

In the letter, director general Paul Bainsfair wrote: “The introduction of such a draconian measure at this time could have deep repercussions for agencies and the advertising sector, generally, in terms of jobs and creative output, for very little end result.”

Health and Social Care Minister Helen Whately told BBC Breakfast an announcement was due “imminently”. She said she recognised obesity was “possibly the greatest health challenge” the country faced – “particularly with Covid”.

Tam Fry, chairman of the National Obesity Forum, told BBC Radio 4’s Today programme he believed the prime minister’s experience in St Thomas’s hospital had been a “game changer” and that it was understood the aim was to get people to lose weight “prior to the next spike”.

He said: “There hasn’t been a ban like this but it has got to be given a try – and if after a period of time it is shown not to be so effective, then maybe it will stop.

“It is indeed a risk but the problem is that the consequence of obesity is so great that risks and daring measures have to be put in place.”

He called for the sugar tax on soft drinks to be extended to other products.

Do you struggle with your weight? What would help you to resolve this issue? Are there any experiences you’d like to share? Email haveyoursay@bbc.co.uk.