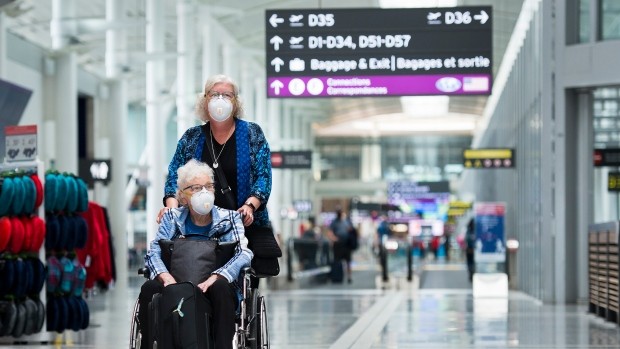 TORONTO —
A total of 30 flights have landed at a Canadian airport in the last two weeks with at least one confirmed case of COVID-19 onboard but passengers on those planes may not have been directly informed of their exposure risk.

The federal government has flagged nine domestic flights and 21 international flights from cities in Europe, India, Mexico, the Middle East and a range of U.S. cities.

Thirteen of the international flights landed in Toronto, five in Vancouver, one in Calgary, and two in Montreal. The most recent, an Aero Mexico flight from Mexico City, landed in Montreal on July 18.

Passengers are not notified directly by federal public health authorities to get tested, though the government acknowledges those onboard affected flights “may have been exposed to COVID-19.”

It goes on to say: “Being aware of the risk can help you take the necessary steps to protect your health and the health of others around you.”

The government website reminds those returning to Canada they must quarantine for 14 days, the believed incubation period of the virus, whether or not they have symptoms. Passengers must also provide their contact information upon arrival, the Public Health Agency of Canada (PHAC) reiterated to CTVNews.ca in response to queries on contact tracing for travellers.

Provincially, health authorities in British Columbia, Manitoba and Saskatchewan also post flights affected by COVID-19 online, but Alberta, Ontario, and Quebec do not. Alberta, for example, directs users to the federal list. Authorities in the Atlantic provinces advise the public as cases arise. B.C. health authorities specifically state on their website that international and domestic passengers seated near a confirmed case of COVID-19 are no longer directly notified of their potential exposure.

Infection control epidemiologist Colin Furness said that not instituting immediate contact tracing of confirmed cases on board flights is a “huge blindspot” in Canada’s pandemic response.

“Airlines are quite capable of sending you a text to tell you your flight’s delayed,” Furness, an assistant professor at the University of Toronto, told CTVNews.ca.

“Transport Canada could pass a regulation tomorrow that if an airline is notified of a case of COVID-19, they must text everyone on that plane.”

Transport Canada referred questions from CTVNews.ca to the PHAC, which is overseen by Health Canada. The agency said in an email that contact tracing activities are conducted at a local level and led by provinces and territories. It added that it does facilitate sharing relevant information between the airlines, the provinces and territories, as well as with the country from which the infected passenger arrived in accordance to the law.

“They determine whether contact tracing is necessary and will follow through as they deem appropriate (we do assist them by providing passenger information when requested),” he wrote in an email in response to questions from CTVNews.ca.

He said that a flagged flight doesn’t mean anyone “contracted COVID on the flight or necessarily had it during the flight, only that the individual recently travelled and has since tested positive for COVID-19.”

WestJet, which keeps a running tally of COVID-19 impacted flights on its blog, said in an email that it has a strict process and protocol in place for notifying crew members who served on an affected flight as soon as the airline is notified, and that has taken additional measures to help inform the public.

“It is our understanding we are the only airline taking the extra step to post affected flights to our external channels. We are doing this to inform the public at large and to aid the media in assisting public health officials in disseminating this information as quickly and as broadly as possible,” WestJet spokesperson Morgan Bell told CTVNews.ca by email.

As of July 16, when the WestJet list was last updated, it listed nine flights in July, but none since July 6.

Of the flights flagged on the federal government’s website, three domestic and eight international indicate that affected rows are unknown. Most of the others show a span of four to six rows.

According to Air Canada and PHAC, health agencies include affected rows based on information collected from the passenger, who might not remember where they sat or may have moved around during the flight.

Fitzpatrick said passengers with concerns about exposure on a plane should contact their doctor.

“However, it is important to understand the incidence of individuals contracting a communicable disease inflight is very low. As evidence, consider what are called ‘cluster outbreaks,’ where a group of people contract a disease at the same time and location. These are rarely if ever tied to modes of travel, whereas you often see reports of outbreaks arising from funerals, bars or other gatherings.”

An Air Canada fact sheet says, “the reasons for the apparently low rate of in-flight transmission are not fully determined but are thought to include a combination of the lack of face-to-face contact, and the physical barriers provided by seat backs, along with the characteristics of cabin air flow.”

Joseph Allen, an assessment science professor at Harvard University, wrote in a Washington Post opinion piece in May that ventilation systems required for airplanes meet the standards for isolation rooms to treat COVID-19 patients recommended by the U.S. Centers for Disease Control and Prevention.

Allen said that while planes are vectors of disease that carry infectious people around the world, that doesn’t mean passengers are at risk while flying with them.

“Billions of people travel by plane every year, yet there have only been a handful of documented disease outbreaks attributable to airplanes in the past 40 years,” he wrote.

“If planes made you sick, we would expect to see millions of people sick every year attributable to flights. We haven’t seen it because it’s just not happening.”

Furness, the infection control epidemiologist in Toronto, doesn’t agree that flights pose a low risk. He says he won’t be flying until a COVID-19 vaccine is widely available.

He was surprised the federal government didn’t step in when airlines announced they would start selling middle seats again. He said he doesn’t trust airlines to take care of his health and he doesn’t accept that flying is safe.

“I think it’s a crazy situation that could lead us to another lockdown.”

With files from Solarina Ho

Don't Miss it Starting over again – The covid-19 pandemic is forcing a rethink in macroeconomics | Briefing
Up Next Coronavirus update: The latest COVID-19 news for Monday May 18 | ABC News