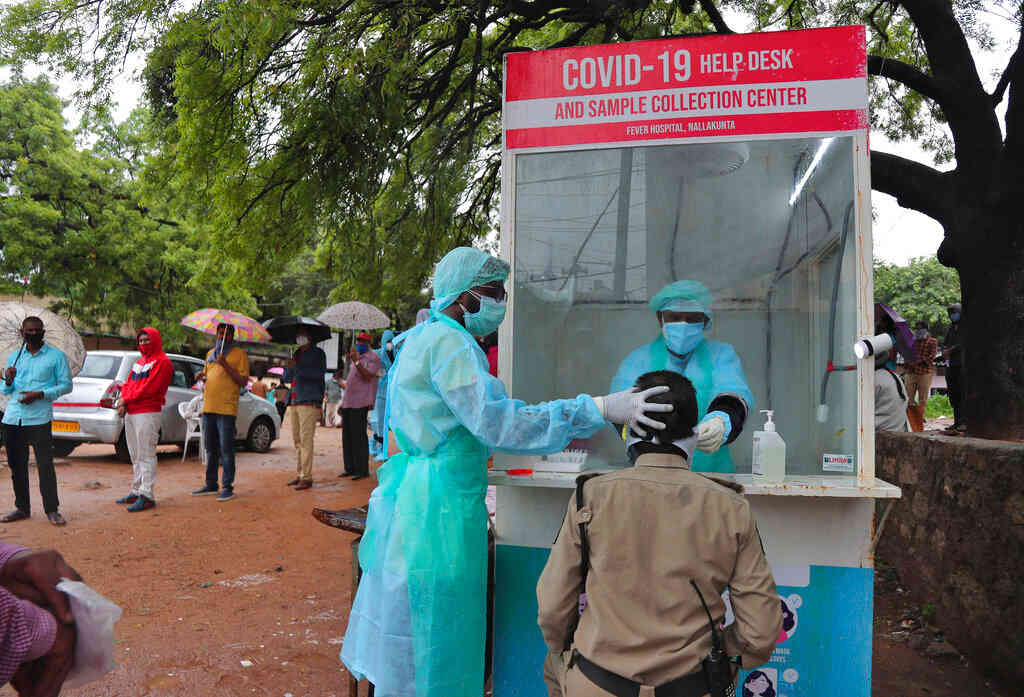 Coronavirus LIVE Updates: The prime minister said that efforts are on to increase the number of tests per day to 10 lakh in the coming weeks.


Coronavirus LATEST Updates: Speaking at the virtual launch of three high throughput testing facilities, Prime MInister Narendra Modi said that there are more than 11,000 COVID-19 facilities and over 11 lakh isolation beds in the country. “We also have nearly 1,300 testing labs in the country and more than five lakh tests are being conducted daily,” ANI quotes him as saying.

Delhi chief minister Arvind Kejriwal on Monday said that there was an improvement in the COVID-19 situation in Delhi. ‘The ‘Delhi model’ is being discussed in India and across the world. Today the recovery rate in Delhi is 88 percent.’

The reported active COVID-19 cases in India now stand at 4,85,114. The recovery rate among COVID-19 patients has increased to 63.92 percent.

As India’s coronavirus case count mounted to 13,85,522 on Sunday with 48,661 people testing positive for the disease, Prime Minister Narendra Modi warned against displaying any laxity in following precautionary measures, saying that the virus remained as fatal as it was at the beginning of the pandemic.

Several states, including Gujarat and Uttar Pradesh, saw a spurt in daily cases while southern states, with the exception of Karnataka, recorded a marginal dip in fresh infections.

In the northeast, Sikkim extended the complete lockdown till 31 August, hours after the state reported its first COVID-19 fatality. Restrictions were also extended in Jammu and Kashmir’s Bhaderwah town after 14 more cases surfaced there.

Tamil Nadu came to a virtual standstill on the last Sunday lockdown this month, with only milk supply and health care services remaining operational in the state. A similar situation prevailed in Maharashtra’s Nagpur where a ‘Janata curfew’ elicited a good response on its last day.

“At many places, the virus is spreading fast. We need to be extra vigilant. We have to bear in mind that the virus is as fatal today as it was in the beginning. Which is why we have to be cautious,” Modi said.

Modi also advised those feeling uncomfortable while wearing masks to remember the burden and sacrifice of those in the front lines of the battle against the virus.

The data updated by the Union health ministry in the morning showed that the cumulative total of coronavirus cases in the country grew to 13,85,522 with 48,661 fresh cases reported since Saturday morning. The country’s toll rose to 32,063 with 705 fatalities being recorded in a day, the data updated at 8 am showed.

According to news agency PTI, this is the fourth consecutive day when COVID-19 cases have increased by more than 45,000.

As many as 36,145 patients have recuperated from the novel coronavirus infection in a span of 24 hours, the highest recorded in a day, pushing the recovery rate to 63.92 percent, the ministry said on Sunday. The number of recoveries exceed active coronavirus infections by 4,17,694.”Recovered cases are 1.89 times the active cases,” the ministry said, adding that the case fatality rate has further dropped to 2.31 percent

The total number of tests for detection of COVID-19 has crossed the 16 million-mark in the country, it said. According to the Indian Council for Medical Research (ICMR), a cumulative total of 1,62,91,331 samples have been tested till 25 July with 4,42,263 samples being tested on Saturday.

In another development,  the National Task Force on COVID-19 decided against including Itolizumab drug in clinical management protocols for treating the disease even though the Drugs Controller General of India (DCGI) has approved its “restricted emergency use” in infected patients, official sources told PTI.

Itolizumab, an already approved drug of Biocon, used for treating psoriasis — a skin condition — was approved for “restricted emergency use” in ‘moderate’ to ‘severe’ Acute Respiratory Distress Syndrome patients with COVID-19.

The drug was left out of the clinical management protocols as there was not enough evidence, said the sources. However, a Biocon spokesperson said that nearly 1,000 persons have used the drug with good outcome. “The National Covid Task Force needs to see more evidence and we will provide them large real-world data to enable the committee to reconsider its decision on inclusion of Itolizumab in the protocol,” he said.

The national capital has recorded a 44 percent decline in the number of COVID-19 deaths in early July as compared to early June, the Delhi government said. The city recorded 605 deaths due to the viral disease between 1 and 12 July as against 1,089 fatalities during the same period in June, according to an analysis carried out by the Health Department.

Meanwhile, Madhya Pradesh, Gujarat and Uttar Pradesh reported their highest single-day addition in coronavirus cases. Madhya Pradesh saw its highest single-day spike in COVID-19 cases as 874 people tested positive for the infection, including 205 in capital Bhopal, taking the state’s count to 27,800. The toll rose by 12 during the day to reach 811.

Gujarat reported as many as 1,110 new COVID-19 cases, taking the total count to 55,822 while 21 patients died, including 12 in Surat, the state health department said. The cumulative toll in the state now stands at 2,326. However, the recovery rate also improved to 72.31 percent, with 753 patients being discharged during the day.

Karnataka too witnessed a record increase of 5,199 new cases, taking the aggregate in the state to 96,141, while 82 succumbed to the virus and the toll rose to 1,878, the health department said. Bengaluru urban continued to record highest number of deaths. The city has seen 891 deaths so far including 29 on Sunday.

However, the rest of the southern states with high daily caseloads — Tamil Nadu, Kerala and Andhra Pradesh — saw minor dips compared to the previous days.  Kerala, with 927 cases on 26 July, saw a marginal decline against the infections reported on Saturday, at 1,103.

Andhra Pradesh also witnessed a minor dip on Sunday when compared to the infected persons on Saturday or Friday, but the state still reported cases in excess of 7,000 for the third day. The state’s daily cases stood at 7,627 on Sunday while it recorded 7,813 cases yesterday.

Telangana reported over 1,500 cases, taking the tally past 54,000, with a majority of the infections coming from the Greater Hyderabad Municipal Corporation (GHMC) limits.

With 6,986, Tamil Nadu reported only two cases lesser than on Saturday, even as the state observed a strict Sunday lockdown. The roads wore a deserted look as people stayed indoors in keeping with lockdown curbs. Health care services were open, sanitary workers continued their clean up work, and personnel of civic bodies conducted door-to-door surveys to find people with flu-like symptoms and fever camps were also held.

Shops selling essential commodities, fuel pumps and markets were closed as part of measures to help fight COVID- 19 while most vehicles also stayed off the roads.

Similar scenes were observed in Maharashtra’s Nagpur city where markets stayed shut and people remained indoors under the Janata curfew. Over 3,000 police personnel were deployed to enforce the curfew, officials said.

An eight-day total lockdown began in Dimapur, the commercial hub of Nagaland, from Sunday to stem the spread of COVID-19. Streets were empty and shops remained closed. A few pharmacies and hospitals were open in some localities to cater to people in medical emergencies.

Government offices, banks and medical clinics that are exempted from the purview of the lockdown remained closed on Sunday.

The Sikkim government extended the statewide lockdown, scheduled to end on Sunday, till 1 August “After careful consideration of the situation, it has been decided to extend the period of lockdown in the entire state of Sikkim till 6 am of 1 August, 2020,” a notification issued by Chief Secretary S C Gupta said.

The state reported its first COVID-19 death on Sunday after a 74-year-old man succumbed to the disease at a state-run hospital. Sikkim has 357 active cases of COVID-19, while the total cases stand at 499.

The Jammu and Kashmir administration also extended a complete lockdown imposed in Bhaderwah town of Doda district to arrest the spread of COVID-19. The restrictions will be in place till further orders to make way for a smooth contact-tracing and sampling exercise of the fresh cases, Sub-Divisional Police Officer, Bhaderwah, Adil Rishu said.

The curbs in Bhaderwah were initially imposed on 21 July after 30 positive cases of COVID-19 were detected in Doda. This is the third time that the lockdown has been extended.

“We have extended the complete lockdown till further orders after 14 more persons were found coronavirus positive. Contact-tracing and sampling of them is still going on and will take sometime,” Rishu said, adding that the situation will be reviewed on Monday. No relaxation will be granted even for medical shops, he said.