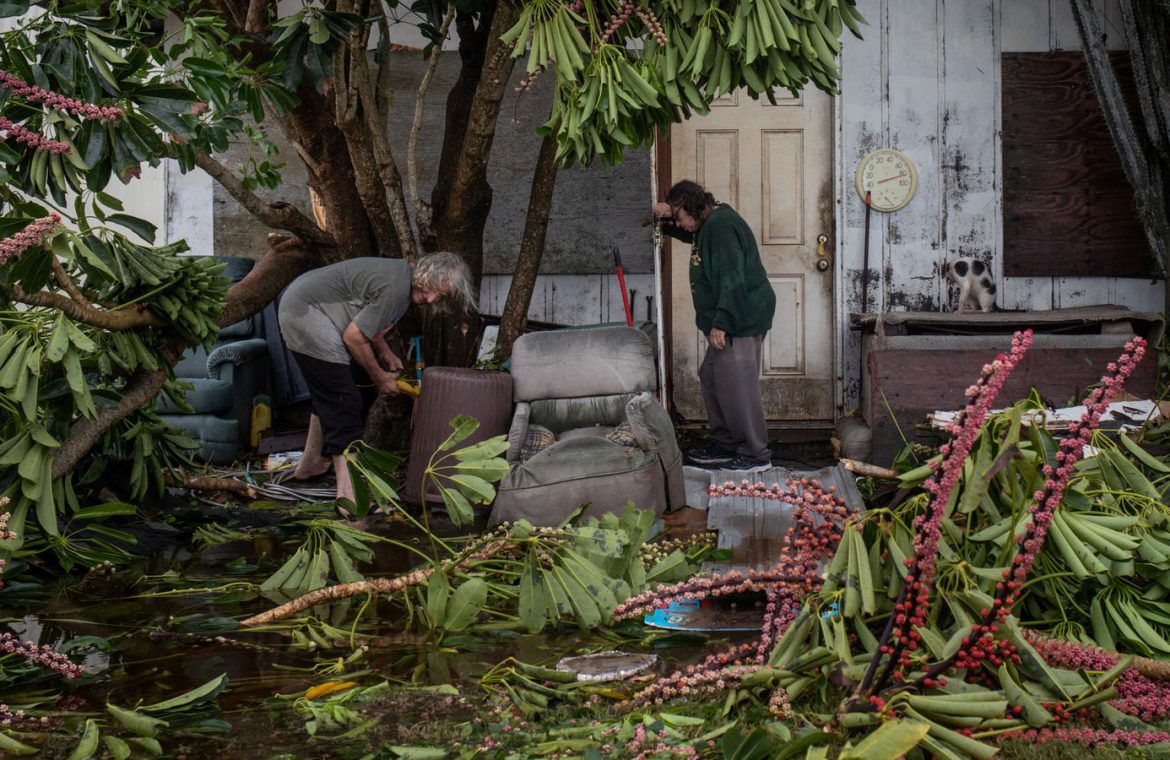 Thousands of homes and businesses have been left without power after Hurricane Hanna swept through southern Texas.

It came ashore on Saturday as a category one storm (the lowest of the five levels) and later was downgraded to a tropical storm.

But winds of up to 60mph still battered towns, the US National Hurricane Center (NHC) said, toppling vehicles and forcing a two mile stretch of US Route 77 in Sarita, near the Mexican border, to be closed for rescue missions.

Image:
Homeowners have been left with plenty of damage to clear

Image:
Trucks blown aside along US Route 77 in Sarita, Texas

The storm led to 283,000 homes and businesses losing electricity on Sunday, but the figure fell to 230,000 by the afternoon, according to poweroutage.us.

As it moved across Texas, it was forecast to become less severe, prompting weather officials to cancel the storm surge warning for the coast.

But while the winds have passed, there could be up to 18 inches of rain in isolated areas of southern Texas on Monday.

A spokesman for the NHC said: “This rain will produce, life-threatening flash flooding, rapid rises on small streams, and isolated minor to moderate river flooding.”

The storm has added to the ongoing problems Texas has already been dealing with in recent weeks, after it was faced with a surge in coronavirus cases.

The first landfall happened at 5pm on Saturday, 15 miles north of Port Mansfield, which is about 130 miles south of Corpus Christi.

The second took place nearby in eastern Kenedy County.

More than 43,700 people in South Texas, including Corpus Christi, Harlingen and Brownsville, were without power on Saturday evening.

In a tweet, President Donald Trump said his administration was monitoring Hanna, along with Hurricane Douglas, which was heading toward Hawaii in the Pacific Ocean.

My Administration is closely monitoring Hurricane Douglas off Hawaii & Hurricane Hanna, which has now made landfall in Texas. We continue to coordinate closely with both states — listen to your emergency management officials @Hawaii_EMA & @TDEM to protect your family & property! https://t.co/tFxHLSqcBE

Resident Sherry Boehme, who lives along a beach in Corpus Christi, said the storm had increased the anxiety she felt during the pandemic.

The 67-year-old has mostly stayed at home because of health issues related to chronic lung disease.

She said: “It’s almost like a double whammy to us. I think it’s made a lot of people nervous.

“We’ll get through it. Everybody is good and strong and sticks together.”