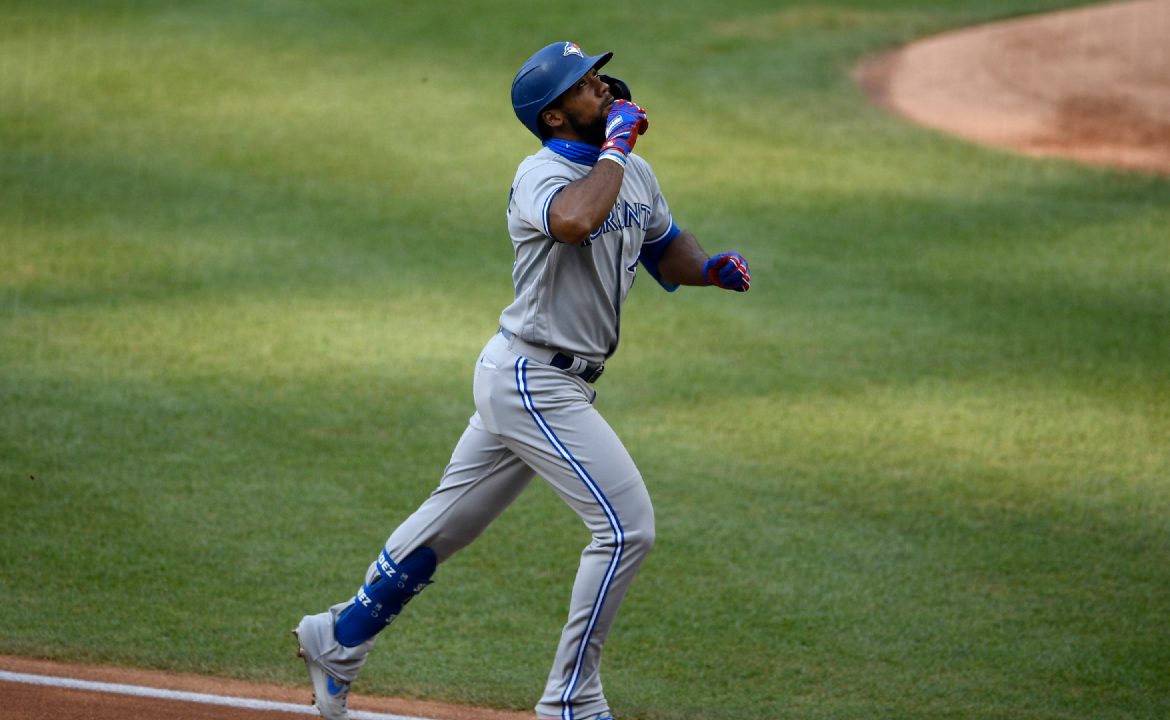 A Canadian flag replaced the World Champions banner inside the centre-field entry gate, its doors and turnstiles locked tight to protect against the spread of COVID-19 — a virus that’s already playing havoc with the league’s efforts to get its truncated season underway.

A thunderous crowd roar went up — from the speakers, not the seats — when the Washington Nationals took the field, the neon billboards blinking and flashing their hypnotic hype to no one in particular.

The canned crowd was quickly reduced to a murmur, however, when Jays leadoff batter Teoscar Hernandez drilled Anibal Sanchez’s second pitch of the night into the empty right-field stands, his first home run of the season, the only audible applause coming from the Toronto dugout as Hernandez rounded the bases.

He did it again four innings later, but not before first baseman Rowdy Tellez and catcher Danny Jansen had already followed Hernandez’s lead, their collective efforts resulting in a 4-1 lead that the Jays never relinquished.

Outside the ballpark, what would normally be raucous throngs of Nats-garbed, well-oiled supporters were reduced to a single superfan on a lonely vigil, a lone protester determined to convince the league to let a limited number of people watch the game in person.

“It’s surreal,” said Hayden Bluth, toting a placard that read “Sell Me Tickets,” as he wandered around the outside of the stadium, occasionally reading out his sign at the top of his lungs.

Bluth said he listens to the games on his phone, but the feed is delayed by as much as 30 seconds, which means he often catches details of the action on the giant video screen _ partially visible from the street — long before he hears the play-by-play through his earbuds.

“The scoreboard is beating me to the punch. So I’m seeing what’s happening based on that centre-field board,” he said. “It’s just very bizarre.”

Santiago Espinal, on the other hand, is just taking the pandemic in stride the only way he knows how: by staying home as much as possible.

The rookie infielder, who played his first game with the Jays on Saturday at Tampa Bay, said staying put is the best way to defend against the risk of getting infected on the road _ which, for Toronto, banned from playing in its home country, is now all the time.

“The only thing that we can do is take care of each other,” Espinal said.

How much longer Espinal’s rookie season will last remains an open question.

Monday’s Miami Marlins home opener was abruptly cancelled on the weekend after a number of players tested positive for COVID-19, including Espinal’s close friend Harold Ramirez. The New York-Philadelphia game was also called off, since the Yankees would have been in the same clubhouse the Marlins used last weekend.

The biggest challenges still lie ahead, said Toronto manager Charlie Montoyo — particularly early next month, when the Jays are scheduled to host Miami at Sahlen Field in their first games at their new home in Buffalo, N.Y. The Jays also have two more series with Tampa Bay next month — one home, one away — and a road series in Miami in early September.

What happened to the Marlins “could happen to any team,” Montoyo said, offering his sympathies and best wishes to Toronto’s Florida rival.

“The moment we left Canada, there was concern — you know, we’ve got to follow the guidelines. It’s not going to be easy. We’re going to Florida, that’s a hot spot. So we talk about it all the time and we meet with the coaches every day and make sure we keep communicating with the guys just to be careful and follow the guidelines.”

Right-hander Tanner Roark, a former National who signed with the Jays in the off-season as a free agent, said when players take to the field, it’s important not to dwell on what he described as “a very weird season for everybody.”

“You’ve just got to be extremely careful. And keep your fingers crossed, I guess,” shrugged Roark, who was far more comfortable talking about his return to a familiar city and ballpark than he was about the complications arising from the pandemic.

The positive test results have cast a pall over a stalled, abbreviated season that’s not even a week old, thanks to a pandemic that has already forced the Jays to call Buffalo home after the federal government refused to let them play in Canada.

Roark said the decision was made to play ball, so it’s time to for the players and the teams to execute that decision as best they can.

“We decided to play a season, so, ultimately, that’s what we’re going to try to do our best to do,” he said. “It’s unfortunate with guys testing positive, and, you know, hopefully they’re doing OK and going through the process and all that.”

Espinal, for one, isn’t letting the circumstances get him down.

“I know what’s going on and I know what is happening in the world, so what I’m trying to do is try to be careful,” he said.

“When I get on the field, when I get here in the locker room, my focus is to do my job and to try to help the team win. And as soon as that the game is over, I just try to be careful. Stay in my room. And that’s it.”