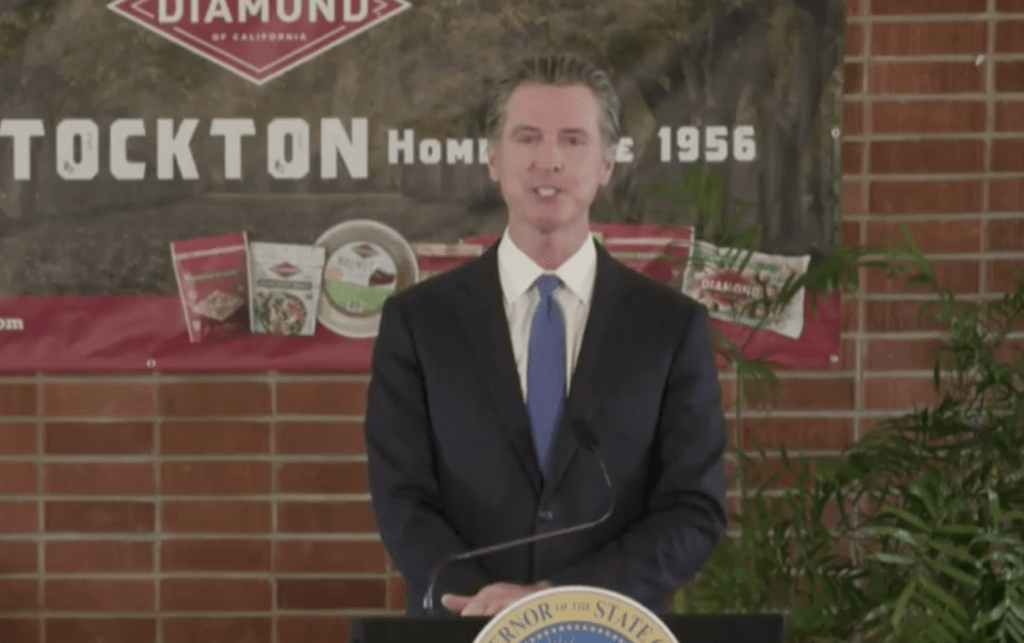 Weeks after California Governor Gavin Newsom identified Imperial County as the state’s hardest-hit region, he announced at his daily news conference that the state’s Central Valley was the new major area of concern.

While the 14-day average rate of positive tests statewide is 7.5 percent, that rate in the Central Valley ranges between 10.7 and 17.7 percent. Essential workers at farms, manufacturing and prisons there have been hit especially hard.

The governor announced that, much as he did a few weeks ago in hard-hit Imperial County, he was deploying three “strike teams” made up of of HHS, OSHA, state emergency services personnel and local partners to aid the Central Valley.

He announced a $52 million investment to bolster testing, tracing and healthcare support in the Central Valley. That comes via a $400 million CDC grant.

In the Central Valley there are 8 counties where the is R above 1, meaning that for every person infected, they pass it on to more than one additional person. The state’s top health official, Dr. Mark Ghaly, said the R was as high as 1.4 in some cases.

Some areas seeing 65 percent of their hospital and ICU beds taken up by coronavirus cases, said Dr. Ghaly.

Outside the Central Valley, said the governor, Imperial Valley is making progress, while Los Angeles was still “a disproportionate focus” of state efforts.

California saw 6,891 new cases of coronavirus in the past 24 hours, he reported, for a total of 460,550 confirmed infections. COVID-19 resulted in 29 new deaths on the state for a total of 8,445. The number of COVID-related deaths increased by 0.3 percent from Saturday’s total of 8,416. The numbers were significantly lower in part because of delays caused by a new reporting process.

The number of COVID-19 diagnostic test results in California reached a total of 7,296,578 an increase of 128,439 tests since Saturday. The rate of positive tests over the last 14 days is 7.5 percent. That number has been “holding strong,” according to Newsom.

CA’s positivity rate remains at an average of 7.5%.

Lest residents let their guard down due to lower recent numbers, the governor reminded that the 7-day average of daily new cases is is 9,859. The seven day average of new daily deaths, he said, also rose. That number was 91 a week ago and is 109 today.

“Those 7 day averages were a testament to a different reality,” said Newsom. “Please let’s wake up to that reality.”

Hospitalizations increased by 29, or .3 percent. The number of new ICU patients in the state rose by 19, filling a total of 2,012 of the state’s ICU beds. After bottoming out at 28 percent of the state’s intensive care beds, the percentage of those beds occupied by coronavirus patients has risen over the past seven days to 28.8 percent. The governor says those rates of increase are “more modest” than they had been a few weeks ago.

About 7,000 Californians are now in hospital beds with COVID-19. That’s more than during the March-April spring surge, according to the California Hospital Association.