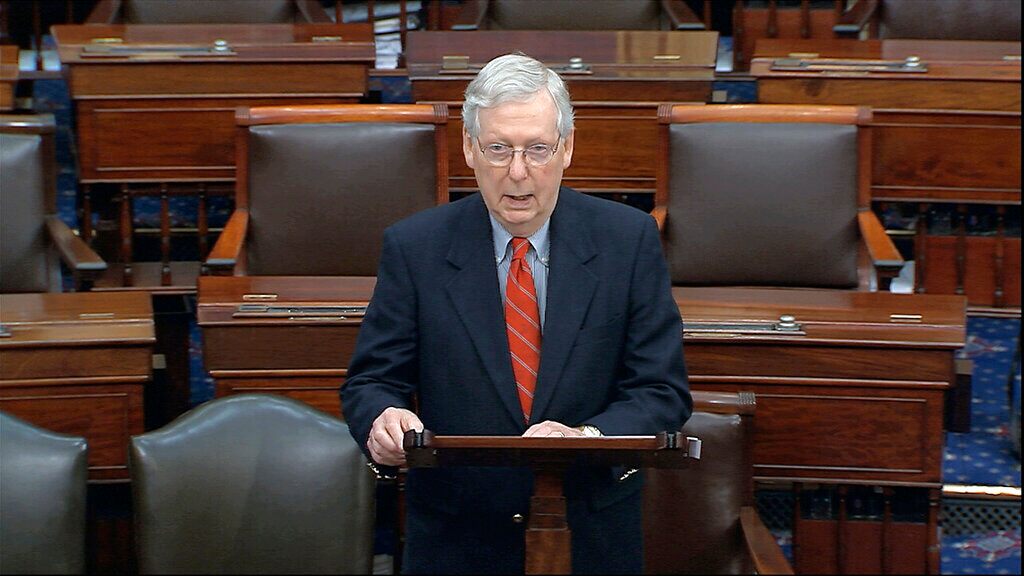 Senate Republicans unveiled their version of a fresh round of coronavirus relief on Monday, as White House negotiators and House Speaker Nancy Pelosi are set to meet in the evening to begin negotiations.

“So I hope this strong proposal will occasion a real response. Not partisan cheap shots. Not the predictable, tired, old rhetoric as though these were ordinary times and the nation could afford ordinary politics,” Sen. Majority Leader Mitch McConnell, R-Ky., said in unveiling the HEALS Act.

The $1 trillion Republican bill is the alternative to the House’s HEROES act, the $3 trillion relief legislation passed in May. HEALS stands for the package’s focus on Health, Economic Assistance, Liability protection, and Schools.

The HEALS Act is more targeted than the CARES act, tailored to an economy that has “one foot in the pandemic and one foot in the recovery,” according to McConnell.

The relief legislation includes $100 billion in school funding, more than the House offered in its proposal, with the goal of retrofitting schools and universities with coronavirus precautions to open for on-campus learning.

It also includes a second round of stimulus checks at the same $1200 amount as in the CARES act, along with a “sequel” to the Paycheck Protection Program to mitigate layoffs.

Federal unemployment benefits would be extended, but at an additional $200 per week rather than the $600 that the CARES Act offered. That number would run through the first week of October, at which point states are supposed to bring a more complicated program online where those who are still unemployed can collect 70 percent of their former wages.

“The boosted unemployment benefit is significantly more than the Democratic Senate and President approved in the 2009 economic crisis, and it doesn’t pay most people more than working like the extra $600 does,” Sen. Finance Committee Chair Chuck Grassley, R-Iowa, said.

McConnell noted that the additional $200 was still eight times the $25 per week in federal benefits offered following the 2008 recession.

Liability protections would be included for everyone from doctors and nurses, who will be protected from malpractice suits, to churches, charities, businesses and schools, McConnell noted. The hope is that the protections will encourage companies to reopen without fear that they will spend years in court.

The bill also includes $16 billion for COVID-19 testing and contact tracing; $20 billion for vaccine, therapeutic and diagnostic development; $20 billion for farmers and $30 billion to protect the military and defense industrial base from the virus.

McConnell delayed unveiling the legislation last week after he said the White House had requested more time to review it. Trump had long pushed for a payroll tax cut to spur hiring, but ultimately Republicans opted for direct stimulus payments instead.

“We’ve waited months for a Republican bill and still the Republican response is totally inadequate,” the New York Democrat said on the Senate floor.

He criticized the Republican plan for offering the unemployed 70 percent of their former wages.

“Republicans say take a 30 percent pay cut. Can you believe that? You lost your job, can’t get to work, and now they want to take $1600 out of your pocket every month,” Schumer said.

McConnell urged Democrats to put aside their “socialist manifesto,” the HEROES Act, and come to the negotiating table.

“The Senate will not waste time with pointless partisanship,” he said. “There is a reason why even Speaker Pelosi and Leader Schumer themselves have publicly downplayed the multi-trillion-dollar socialist manifesto they published some weeks back, and have suggested the real, serious discussion would begin when Republicans released our outline.”

“Are we going to get the Democratic Party we got in March, when our colleagues met us in good-faith negotiations and worked with us to turn our framework into a bipartisan product?” McConnell continued.“Or will the country get the Democratic Party we saw in June, when our colleagues refused to suggest amendments or improvements to Senator Tim Scott’s police reform bill, and chose to block the issue altogether?”

He said Democrats’ failure to negotiate with Republicans on police reform left some wondering whether they had chosen to “give up on bipartisan legislation altogether through November.”

Public Health Sudbury & Districts is reporting a new COVID-19 case in a resident in its service area (Greater Sudbury,…

Here’s what you need to know:Dr. Anthony S. Fauci at a White House briefing last spring. Speaking on CNN on…

Finding a vaccine that protects us against coronavirus is the first challenge. The second challenge will be getting that jab…

Warrington will be going into Tier 3 two days earlier than expected after the case numbers remain “stubbornly high”. Council…