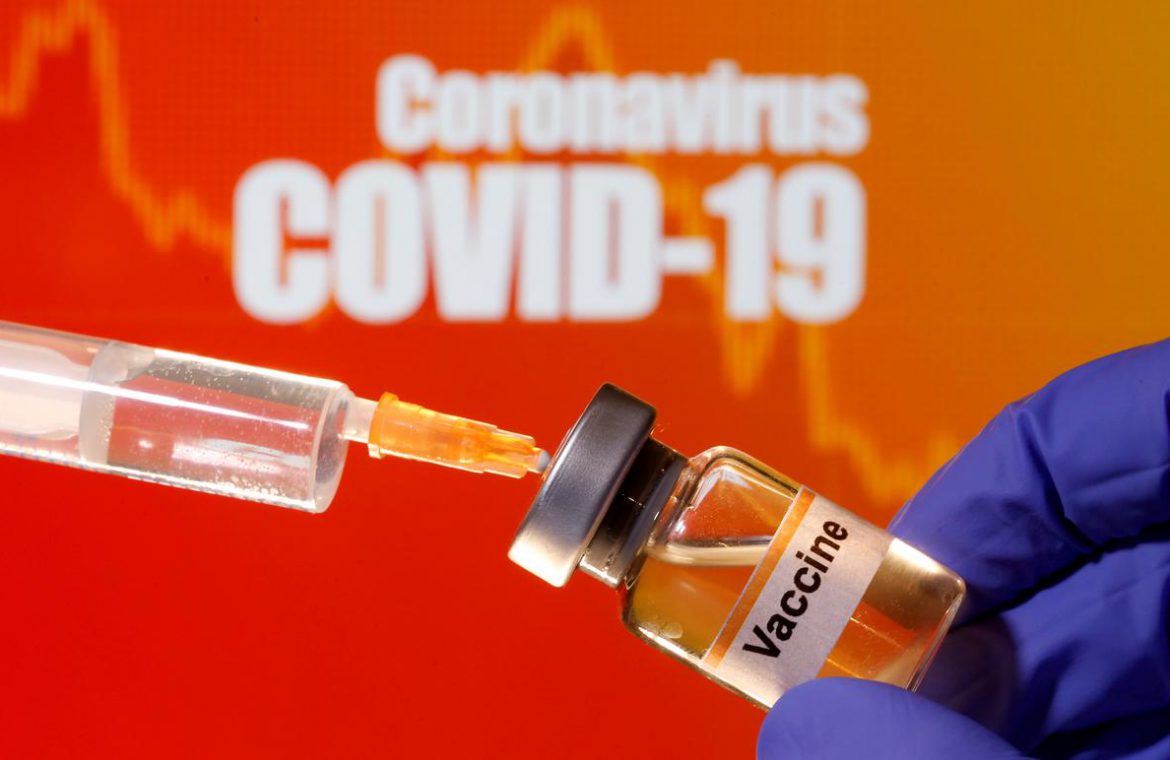 (Reuters) – Moderna Inc (MRNA.O) and Pfizer Inc (PFE.N) launched two 30,000-subject trials of COVID-19 vaccines that could clear the way for regulatory approval and widespread use by the end of this year, the companies said on Monday.

FILE PHOTO: A small bottle labeled with a “Vaccine” sticker is held near a medical syringe in front of displayed “Coronavirus COVID-19” words in this illustration taken April 10, 2020. REUTERS/Dado Ruvic//File Photo

The trials, both announced on Monday, are the first late-stage studies supported by the Trump administration’s effort to speed development of measures against the novel coronavirus, adding to hope that an effective vaccine will help end the pandemic.

Both vaccine candidates rely on a new technology that allows for faster development and manufacturing than traditional vaccine production methods but does not have an extensive track record.

So-called mRNA, or synthetic messenger RNA (mRNA), teaches the immune system to recognise and neutralize the coronavirus by mimicking its surface.

Moderna, which has never brought a vaccine to market, has received nearly $1 billion from the U.S. government, which is helping bankroll several vaccine candidates under its Operation Warp Speed program.

Pfizer has an agreement to sell vaccines for 50 million people to the U.S. government for around $2 billion, if the vaccine is effective.

More than 150 coronavirus vaccine candidates are in various stages of development, with some two dozen prospects already conducting human testing.

Johnson and Johnson is launching clinical trials in the U.S. this week and could start a larger, late-stage trial as early as September. British drugmaker AstraZeneca Plc (AZN.L) said it will begin large-scale U.S. trials this summer of its vaccine under development with Oxford University researchers.

“Having a safe and effective vaccine distributed by the end of 2020 is a stretch goal, but it’s the right goal for the American people,” National Institutes of Health (NIH) Director Francis Collins said in a release announcing the start of Moderna’s large Phase III trial.

Manufacturers are ramping up production while testing is underway in order to respond as soon as possible to virus, which is still spreading rapidly around the world. COVID-19 has killed nearly 650,000 people worldwide and battered economies.

Moderna could have tens of millions of doses ready when and if the vaccine is deemed safe and effective, Collins told reporters on a call.

Pfizer said that if the trial was successful, it could seek regulatory approval as soon as October and supply vaccines for 50 million patients, at two doses each, by the end of the year.

Pfizer aims for about 1.3 billion doses by the end of 2021, and Moderna aims for 500 million-1 billion doses a year, beginning 2021, Moderna Chief Executive Stephane Bancel said on the call.

The late-stage trials are designed to evaluate the safety of vaccines and determine if they can prevent symptomatic COVID-19.

Anthony Fauci, the top U.S. infectious disease official, said a readout from the Moderna trial could come by November or even earlier. Fauci said he was “not particularly concerned” about the vaccine’s safety after seeing data from earlier, smaller trials. He also said he had briefed President Donald Trump about the trial the Oval Office on Monday.

As other companies ready inoculations, the COVID-19 Prevention Network, a U.S. government-funded program formed by the NIH, said it plans to roll out a large-scale clinical trial of a COVID-19 vaccine candidate with at least 30,000 participants each month through fall.