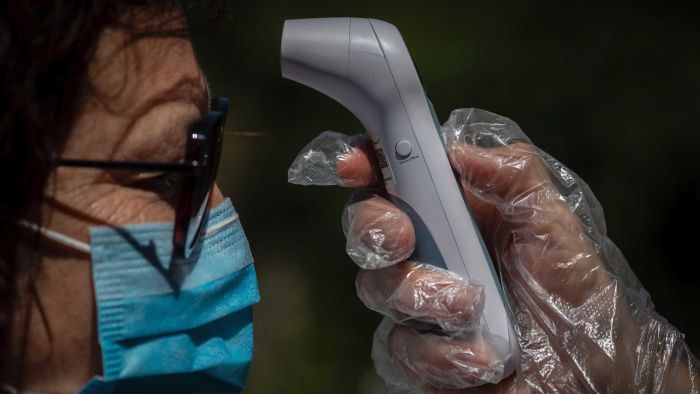 Madrid’s plans for a COVID-19 immunity passport have been scuppered after they were condemned by epidemiologists and politicians alike.

Several schools in Sydney have closed after students tested positive for the coronavirus, while some are awaiting test results following suspected cases.

This story was last updated at 2:45am on Thursday.

Authorities in the Spanish capital of Madrid backtracked on Wednesday (local time) over a highly criticised plan to give an immunity card to people testing positive for coronavirus antibodies so they can enjoy higher-risk areas like gyms, bars and museums.

But after a weekly cabinet meeting of the Madrid authority, her deputy, Ignacio Aguado, told a news conference that the controversial cards would not in fact be issued.

“This would be a registry of organised, updated information, only to be consulted by the health services so that they can take epidemiological decisions,” he said of the modified plans.

Ms Ayuso, who unveiled the programme on Tuesday as a way of letting non-infectious people lead more normal lives while keeping vulnerable people under stricter measures, was not immediately available for comment.

The World Health Organization has discouraged the use of immunity passports because it says there is no proof antibodies provide complete protection.

A large Spanish study showed 14 per cent of participants with antibodies had lost them when tested again three months later.

Estonia began trialling digital immunity passports in May, while Germany, grappling with similar issues to Spain, referred a similar scheme to its national ethics council.

Several government and Catholic schools, as well as a preschool, will be closed in Sydney due to confirmed or suspected coronavirus cases.

Fort Street High School in Sydney’s inner west will close for the day on Thursday for a thorough clean after a possible case of COVID-19.

The school could be shut for longer, pending test results.

Two Catholic schools in the city’s south-west, Mary Immaculate Primary School in Bossley Park and Freeman Catholic College in Bonnyrig Heights, which only re-opened yesterday, will shut again after two children from the same family tested positive for the virus.

Neither child went to school yesterday when it re-opened, but both schools will close until August 10 as an extra precaution, with students learning online.

The school was forced to close last Friday when two other children tested positive.

EverLearn preschool at Prestons in Sydney’s south-west have also closed because of concerns of possible case.

The news of those closures came as NSW Health issued an alert that there is now a wider time window of risk for anyone who attended the Mounties club in Mount Pritchard in late July.

Pop star Madonna has been flagged by Instagram for posting a video about a coronavirus conspiracy to her 15.4 million followers.

The post claims a COVID-19 vaccine has already been found but is not widely available to “let the rich get richer”.

Instagram also directed users to a page debunking the claims in the video, which states that there is currently no coronavirus vaccine.

The video has now been deleted from Madonna’s page after thousands of comments protested her decision to share the post.

Vietnam bracing for nationwide outbreak Vietnam had managed to keep its coronavirus tally to just 450 cases, despite sharing a border with China.(AP: Hau Dinh)

Vietnam, virus-free for months, is bracing for another wave of COVID-19 infections after state media reported new cases in Hanoi, Ho Chi Minh City and the Central Highlands linked to a recent outbreak in the central city of Danang.

Prime Minister Nguyen Xuan Phuc said the current wave of infections was different to a second wave Vietnam fought in March, and every province and city in the country was at risk, state broadcaster Vietnam Television (VTV) reported.

Thanks to a centralised quarantine program and an aggressive contact-tracing system, Vietnam had managed to keep its coronavirus tally to just 450 cases, despite sharing a border with China.

With over 95 million people, Vietnam is the most populous country in the world to have recorded no deaths from the virus, and until now no locally transmitted infections had been reported for months.

That record is now under threat following an outbreak last weekend in Da Nang, where tens of thousands of domestic tourists were vacationing thanks to discounted travel deals.

The Government on Tuesday (local time) suspended all flights to and from Da Nang for 15 days.

At least 30 cases of the novel coronavirus have been detected in or around the city.

About 18,000 tourists who had been in Da Nang have returned to the southern business hub Ho Chi Minh City, authorities said on Tuesday (local time).

Prime Minister Phuc said tourist hubs throughout the country had to step up vigilance, and that Da Nang must go under “strict lockdown”, VTV said.

The source of the infection in Da Nang, origin of the current wave, remains unclear.

Over half in Mumbai’s slums likely infected with coronavirus Around 65 per cent of Mumbai’s 12 million people live in the cramped, airless slums.(Reuters: Shailesh Andrade)

More than half the people living in Mumbai’s sprawling slums are probably infected with the novel coronavirus, which suggests the metropolis could be heading toward herd immunity, a Government official and a health expert said, citing a recent survey.

About 57 per cent of slum-dwellers have tested positive for antibodies for coronavirus, from a random sample size of 7,000 people, according to the survey jointly conducted by Mumbai’s municipality government think tank.

Around 65 per cent of Mumbai’s 12 million people live in the cramped, airless slums, making for easy transmission of the disease.

The survey found that only 16 per cent of those living outside the slums had been exposed to the virus, the low proportion likely the result of social distancing and lockdowns.

An official at Mumbai’s civic body, said the results of the serological survey showed that the city may be inching towards herd immunity.

“We are inching towards herd immunity, but we can’t let it go. We can’t predict the behaviour of this virus,” the official said.

Maharashtra, where Mumbai is located, is the worst-affected Indian state, accounting for almost 400,000 out of India’s total of 1.5 million cases.

Bosnian minister dies of coronavirus at 53

The Bosnian minister for veteran affairs has died after testing positive to COVID-19, he was 53.

Salko Bukvarevic died Wednesday (local time) in a COVID-19 hospital in Sarajevo, where he was admitted last week with pneumonia and breathing problems.

He had served in the government of Bosniak-Croat federation since 2015.

The region’s Prime Minister, Fadil Novalic, was also hospitalised with COVID-19, but was released this week following two weeks of treatment.

Nearly 80 per cent of all cases in the country of 3.5 million were registered since mid-May, when a strict nearly two-month-long, coronavirus lockdown was lifted.

Cases rise in China’s Xinjiang region Outside of Xinjiang, the virus has been largely contained in mainland China.(AP: Andy Wong)

China reported more than 100 new cases of COVID-19 on Wednesday (local time) as the country continues to battle an outbreak in Xinjiang.

The 101 new cases was China’s highest daily increase in weeks. The north-western region of Xinjiang accounted for 89, with another eight in the north-eastern province of Liaoning and one in Beijing

Another three cases were brought from outside the country by returning Chinese citizens.

Outside of Xinjiang, the virus has been largely contained in mainland China with the death toll from COVID-19 remaining at 4,634 among 84,060 cases registered since the pandemic first emerged from the city of Wuhan late last year.

Hospitals are treating 482 people for the disease, with another 274 in isolation while being monitored for showing signs of infection or for having tested positive for the virus without displaying symptoms.

Xinjiang’s outbreak has centred on the region’s capital and largest city of Urumqi, where authorities have isolated some communities, restricted public transport and ordered widespread testing.

The Czech capital has registered its highest day-to-day jump in COVID-19 cases since the beginning of the pandemic.

It said Prague has had over 24 infected per 100,000 people in last seven days. Overall, the entire Czech Republic recorded 275 new cases on Tuesday.

In reaction to the recent surge in Prague, authorities reimposed mandatory masks at out-patient clinics and pharmacies.

Face coverings are also required in the city’s subway network while authorities said masks might become mandatory again in the entire public transport possibly at the end of summer.