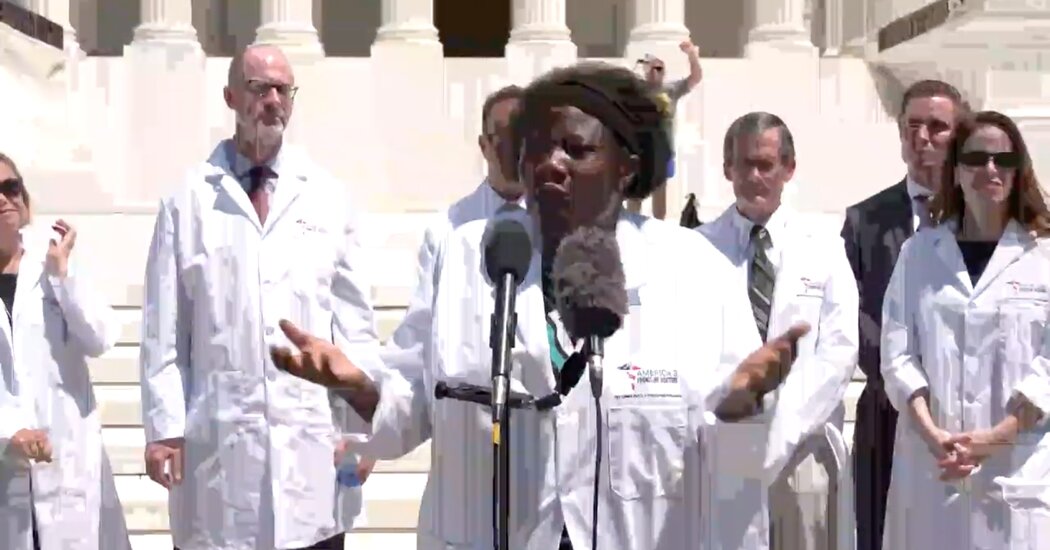 In a video posted Monday online, a group of people calling themselves “America’s Frontline Doctors” and wearing white medical coats spoke against the backdrop of the Supreme Court in Washington, sharing misleading claims about the virus, including that hydroxychloroquine was an effective coronavirus treatment and that masks did not slow the spread of the virus.

The video did not appear to be anything special. But within six hours, President Trump and his son Donald Trump Jr. had tweeted versions of it, and the right-wing news site Breitbart had shared it. It went viral, shared largely through Facebook groups dedicated to anti-vaccination movements and conspiracy theories such as QAnon, racking up tens of millions of views. Multiple versions of the video were uploaded to YouTube, and links were shared through Twitter.

Facebook, YouTube and Twitter worked feverishly to remove it, but by the time they had, the video had already become the latest example of misinformation about the virus that has spread widely.

That was because the video had been designed specifically to appeal to internet conspiracists and conservatives eager to see the economy reopen, with a setting and characters to lend authenticity. It showed that even as social media companies have sped up response time to remove dangerous virus misinformation within hours of its posting, people have continued to find new ways around the platforms’ safeguards.

“Misinformation about a deadly virus has become political fodder, which was then spread by many individuals who are trusted by their constituencies,” said Lisa Kaplan, founder of Alethea Group, a start-up that helps fight disinformation. “If just one person listened to anyone spreading these falsehoods and they subsequently took an action that caused others to catch, spread or even die from the virus — that is one person too many.”

One of the speakers in the video, who identified herself as Dr. Stella Immanuel, said, “You don’t need masks” to prevent spread of the coronavirus. She also claimed to be treating hundreds of patients infected with coronavirus with hydroxychloroquine, and asserted that it was an effective treatment. The claims have been repeatedly disputed by the medical establishment.

President Trump repeatedly promoted hydroxychloroquine, a malaria drug, in the early months of the crisis. In June, he said he was taking it himself. But that same month, the Food and Drug Administration revoked emergency authorization for the drug for Covid-19 patients and said it was “unlikely to be effective” and carried potential risks. The National Institutes of Health halted clinical trials of the drug.

In addition, studies have repeatedly shown that masks are effective in curbing the spread of the coronavirus.

The trajectory of Monday’s video mirrored that of “Plandemic,” a 26-minute slickly produced narration that spread widely in May and falsely claimed that a shadowy cabal of elites was using the virus and a potential vaccine to profit and gain power. In just over a week, “Plandemic” was viewed more than eight million times on YouTube, Facebook, Twitter and Instagram before it was taken down.

But the video posted Monday had more views than “Plandemic” within hours of being posted online, even though it was removed much faster. At least one version of the video, viewed by The Times on Facebook, was watched over 16 million times.

Facebook, YouTube, and Twitter deleted several versions of the video on Monday night. All three companies said the video violated their policies on sharing misinformation related to the coronavirus.

On Tuesday morning, Twitter also took action against Donald Trump Jr. after he shared a link to the video. A spokesman for Twitter said the company had ordered Mr. Trump to delete the misleading tweet and said it would “limit some account functionality for 12 hours.” Twitter took a similar action against Kelli Ward, the Arizona Republican Party chairwoman, who also tweeted the video.

No action was taken against the president, who retweeted multiple clips of the same video to his 84.2 million followers Monday night. The original posts have since been removed.

When asked about the video on Tuesday, Mr. Trump continued to defend the doctors involved and the treatments they are backing.

“For some reason the internet wanted to take them down and took them off,” the president said. “I think they are very respected doctors. There was a woman who was spectacular in her statements about it, that she’s had tremendous success with it and they took her voice off. I don’t know why they took her off. Maybe they had a good reason, maybe they didn’t.”

Facebook and YouTube did not answer questions about multiple versions of the video that remained online on Tuesday afternoon. Twitter said it was “continuing to take action on new and existing tweets with the video.”

The members of the group behind Monday’s video say they are physicians treating patients infected with the coronavirus. But it was unclear where many of them practice medicine or how many patients they had actually seen. As early as May, anti-Obamacare conservative activists called the Tea Party Patriots Action reportedly worked with some of them to advocate loosening states’ restrictions on elective surgeries and nonemergency care. On July 15, the group registered a website called “America’s Frontline Doctors,” domain registration records show.

One of the first copies of the video that appeared on Monday was posted to the Tea Party Patriots’ YouTube channel, alongside other videos featuring the members of “America’s Frontline Doctors.”

The doctors have also been promoted by conservatives like Brent Bozell, founder of the Media Research Center, a nonprofit media organization.

Don't Miss it Australia’s Covid-19 border restrictions: where you can travel to and from | Australia news
Up Next Coronavirus raises tensions on the border between France and Germany | Focus on Europe

Good morning, and welcome to our rolling coverage of the world economy, the financial markets, the eurozone and business. China…