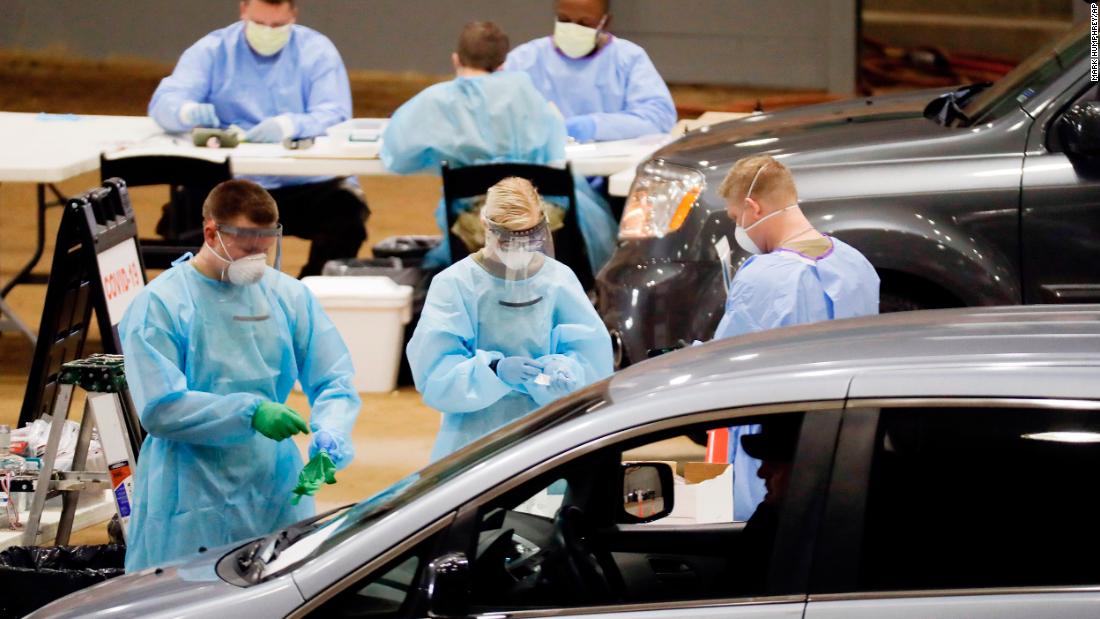 “What inevitably is going to happen is that the states that are not yet in trouble, will likely get into trouble,” Dr. Anthony Fauci, the head of the National Institute of Allergy and Infectious Diseases, said Wednesday in an interview on MSNBC.

States including Ohio, Indiana, Kentucky and Tennessee are seeing an increase in the percentage of coronavirus tests coming back positive, he said, a development that preceded the spike in the South and West. More than 4.4 million cases of the virus and 150,708 deaths have been reported in the US, according to data from Johns Hopkins University

The White House coronavirus task force has warned Midwestern governors that the time to get ahead of the curve is now before the numbers start to skyrocket in their states, Fauci said.

“Before you know it, two to three weeks down the pike, you’re in trouble,” he said.

Already, West Virginia is watching coronavirus migrate from the South daily, West Virginia Gov. Jim Justice said. The state has lost five more people to the virus since Monday, bringing the total to more than 1,100 people.

“It’s just not good. That’s just all there is to it,” Justice said.

States across the West and South have set records for daily cases and deaths this month as the virus has surged.

California set a grim record of 197 deaths in a single day, the California Department of Public Health reported Wednesday. The last record for the state was set just the week before at 159.

Los Angeles County also saw its highest Covid-19 death toll to date with 91 deaths, bringing the total in the county to 4,516. But the county’s Health Director Barbara Ferrer warned that some of Wednesday’s fatalities are also attributed to a reporting backlog.

Also setting a record for coronavirus deaths in one day, Florida reported 216 deaths Wednesday. The state has been at the forefront of the resurgence in coronavirus cases.

Meanwhile, Texas cases have hit 417,098, surpassing New York, which was once the epicenter of the pandemic.

Midwest working to get ahead of the curve

Officials in the Midwest should begin preparing for a similar spike, Fauci said.

As cases rise in Indiana, officials there have decided to conduct a second round of testing on nursing home staff in August to prevent rising numbers from reaching the facilities, Dr. Daniel Rusyniak, chief medical officer of the Indiana Family and Social Services Administration, said Wednesday. Long term care facilities and nursing homes have been the sites of deadly outbreaks in many states.

In Illinois, the High School Association Board of Directors on Wednesday proposed “unprecedented scheduling changes” for sports in the new school year. The sports seasons will be truncated, and fall sports including football, boys’ soccer, and girls’ volleyball will move to the spring, according to a news release, which said the final plan needs approval from the Illinois Department of Health.

On Wednesday, Michigan Gov. Gretchen Whitmer signed an executive order limiting indoor gatherings to 10 people and closing bars across the state for indoor service as of July 31, according to a release from the governor’s office.

“After seeing a resurgence in cases connected to social gatherings across the state, we must further limit gatherings for the health of our community and economy,” the release said. “By taking these strong actions, we will be better positioned to get our children back into classrooms and avoid a potentially devastating second wave.”

Restart needed to get the fight against the virus back on track, experts say

Health experts are urging federal, state and local leaders to come up with policy actions to get control of the pandemic.

Scholars at the Johns Hopkins University Center for Health Security said in a report that the US needs to restart its response to the virus.

“Unlike many countries in the world, the United States is not currently on course to get control of this epidemic,” the report says. “It is time to reset.”

The report includes 10 recommendations that include universal mask mandates, federal leadership to improve testing and, in places where rates of transmission are worsening, stay-at-home orders.

Though some have called for another shut down, Fauci said the better option might be to scale back reopenings and move forward more cautiously from there.

“If you’re going to quickly call a pause, a timeout and think maybe you want to backtrack a little, not necessarily all the way back to shut down, but enough to regain your footing, so that you then proceed to open in a much more cautious fashion,” he said.