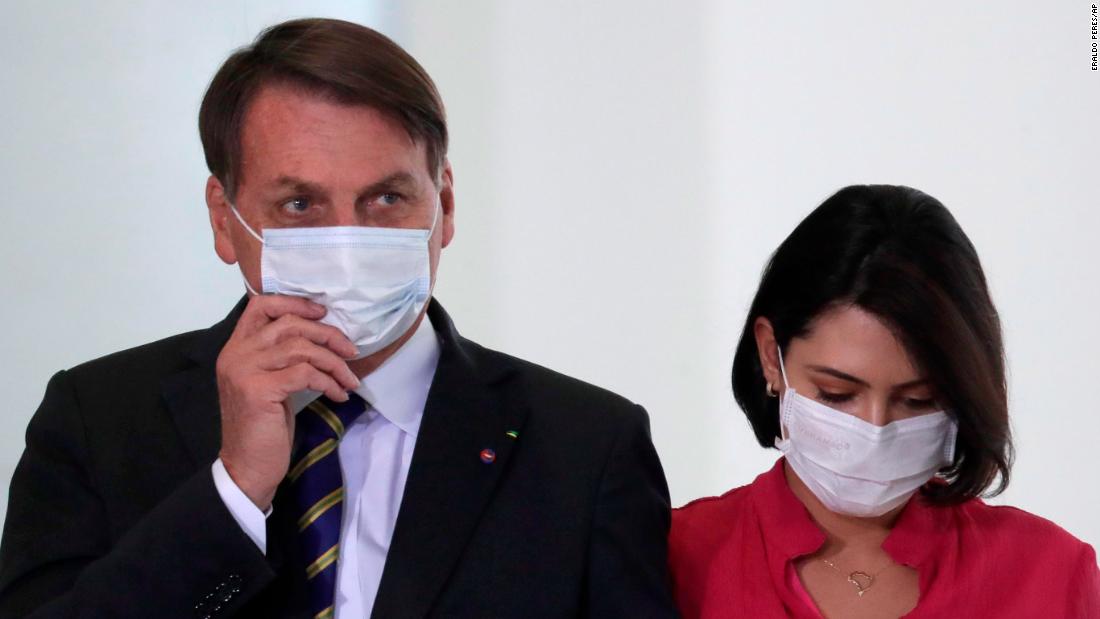 In his first Facebook live video since recovering from Covid-19, Bolsonaro said: “I’ve just taken a blood exam. I was a bit weak yesterday. They have also found a bit of an infection. I’m taking antibiotics now. It must have been those 20 days inside the house, we catch other things. I’ve caught mold, mold in my lungs. It must be that.”

The President spent nearly 20 days in semi-isolation, after testing positive for the virus on July 7 and on subsequent occasions. On July 25, he announced via Twitter that he had tested negative.

His wife, Michelle Bolsonaro, has also tested positive for Covid-19, according to a statement from the President’s press office.

The first lady, who was last seen in public on Wednesday afternoon when she attended an official event in Brasilia with her husband, “is in good health and will follow all established protocols,” the statement said.

“The first lady is being accompanied by the medical team of the Presidency of the Republic,” the statement adds.

In his Thursday address, the President also thanked God and hydroxychloroquine for his health.

“I’m healed from Covid. I have antibodies, no problems. In my particular case, I first thank God, and secondly, the medication prescribed by the presidential doctor: hydroxychloroquine,” Bolsonaro said.

“The following day, I was already OK. If it was a coincidence or not, I don’t know. But it works,” the president added.

Numerous studies have shown that the drug — also touted by US President Donald Trump — is ineffective against Covid-19, and may even be harmful.

Brazil is second only to the United States in numbers of coronavirus infections and deaths. But Bolsonaro has downplayed the virus for months, and often appears in public and at rallies without a face mask, even hugging supporters.

The President made an appearance on horseback Thursday during a visit to Piaui State, where he was greeted by supporters, some of whom were not wearing masks.

In a video posted to Bolsonaro’s official Facebook page, the President is seen on a horse, given to him as he arrived at Sao Raimundo Notato airport. Bolsonaro initially wore a mask, but removed it while celebrating with supporters.

The visit was intended to improve Bolsonaro´s political relations with regional authorities, and to inaugurate a water system in Campo Alegre de Lourdes, a small town in the northeast state of Bahia, a region known for severe droughts.

Don't Miss it Today’s coronavirus news: Toronto, Peel Region enter Stage 3 of reopening today; Canadian economy grew by 4.5% in May
Up Next Grief and mourning during the coronavirus pandemic | COVID-19 Special