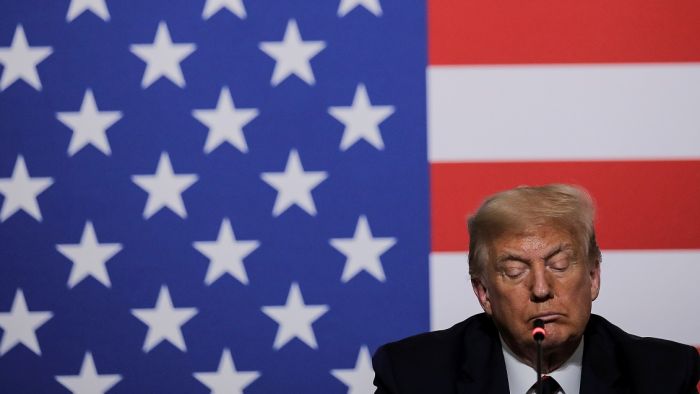 The smouldering economic wreck that America has witnessed on the streets for months has finally shown up in official growth figures.

The economy shrank by 9.5 per cent between April and June, an eye-watering figure, more than three times the magnitude of any other contraction on record since 1947.

When extrapolated out to an annual figure, it’s 32.9 per cent.

The figure amounts to $US1.8 trillion ($2.5 trillion) in lost economic output, in the space of three months.

In terms of shrinkage, this is like taking steroids before swimming in Antarctic waters without a wetsuit.

And remember, it’s happened despite multi-trillion-dollar emergency cash injections drawn up by Congress and approved by President Donald Trump.

Without that stimulus (a debt that America’s kids and grandkids will have to pay back), today’s numbers would have been even uglier.

But here’s the thing: Pundits and politicians are talking about Americans being on the edge of the cliff now — and in danger of falling off.

In other words, things could be about to get much worse.

For the latest news on the COVID-19 pandemic follow our live updates.Expect a partisan stalemate to exacerbate problems Several Republicans, including Rand Paul, say the coronavirus stimulus package goes against their party’s ideals.(Reuters: Tom Brenner)

Negotiations over a new coronavirus relief bill have hit a brick wall in Congress.

There’s an enormous gulf between the Democrats’ $US3 trillion wide-ranging proposal and the Republican’s $US1 trillion bill.

At the end of a third day of negotiations, White House chief of staff Mark Meadows said:

“We are nowhere close to a deal.”

That’s a potential problem for businesses, state and local governments, essential services and the broader economy.

But the biggest shock could be delivered to some 30 million jobless Americans who’ve been relying on the Government to put food on the table.

The US unemployment rate was 11 per cent in June.(Reuters: Nick Oxford)

Ever since passage of the “Cares Act” in March, people on unemployment benefits have been getting a $US600 ($836) bonus every week, over and above the regular payment.

The measure was put in place because politicians in Congress thought it wasn’t fair that workers were tossed out of gainful employment because of the Government’s coronavirus response.

But it’s created a problem, at least anecdotally.

Business owners claim they can’t get their staff to come back, because they’re earning more sitting on the couch than they ever could slogging it out at work.

Republicans want the supplement reduced to $200, while Democrats want it to stay at $600.

And here’s the nub of the problem.

Without a deal in Congress, the unemployment bonus will expire tomorrow.

As well as helping laid-off workers deal with the sudden loss of their jobs, the generous sum has acted as a temporary strut for the failing economy.

And it looks like it’s about to be removed.

The economic pain was self-inflicted by Governments that shut down their states in order to save lives.

The White House and the Governors hoped the payoff would be worth it, in terms life and livelihoods.

Trump talked a lot about a “rebound” coming as early as April, as a result of the “pent-up demand”.

And he’s still talking about a “V-shaped” economic rebound.

Many economists think it’ll be more like a “W”, in which any recovery now, with the re-opening of businesses since June, will be short-lived and followed by a long period of tepid growth or recession.

“The markdowns are coming because of the clear economic damage the virus is doing,” he said.

“We are going in reverse here.”

Trump boasted regularly during his first three years about the strength of the economy.

He had aimed high, with a promise of 3 per cent growth per year and he was delivering, as confirmed by revised numbers out this week.

Now the President is going to great lengths to divert attention anywhere else, even going so far as to raise the question of delaying the election.

Trump’s tweet was classic utilisation of the “dead cat” strategy, whereby a feline carcass thrown on the dining room table will force everyone to stop what they’re talking about (in this case, the economy) and voice their disgust at what’s been served up.

Trump’s “dead cat” caused predictable outrage, despite the fact it’s only possible if his opponents in the Democratic party vote for it.

Even his staunchest allies rejected it outright, pointing out that the US election has not once been delayed, even during the Civil War and the Great Depression.

It’s another example of Republican members of Congress finally standing up to the President, after four years of subservience.

This week, Republicans also rejected outright the President’s push to include another payroll tax cut in the stimulus bill currently being debated.

This sudden burst of spinal fortitude sends a signal that’s perhaps more significant than any recent opinion poll about the likely outcome of the election.

It suggests the Republicans, who are also up for election in November, are putting distance between themselves and the President because they’re worried he’ll drag them to defeat as well.

US death toll surpasses 150,000 on Trump’s watch Donald Trump is now trailing his rival Joe Biden in most national polls, three months out from the election.(AP: Alex Brandon)

Trump staked his entire re-election strategy on the strength of the economy.

Now he regularly tries to explain to disgruntled voters that he had no option but to shut it down, in order to save millions of lives.

He’s right that the loss of life would have been catastrophically worse if he’d done nothing at all.

But in reality, standing idly by as bodies piled up in the streets was never an option.

The graphs indicate that number is about to accelerate dramatically.

That’s only going to cause more restrictions and more economic damage.

As he pushed states to re-open against the advice of his own infectious disease experts, Trump repeatedly stated:

“The cure cannot be worse than the disease.”

He hoped to be able to save the economy, even if it meant more people would die from coronavirus.

Now he’s left presiding over a catastrophic loss of life and a broken economy as well.