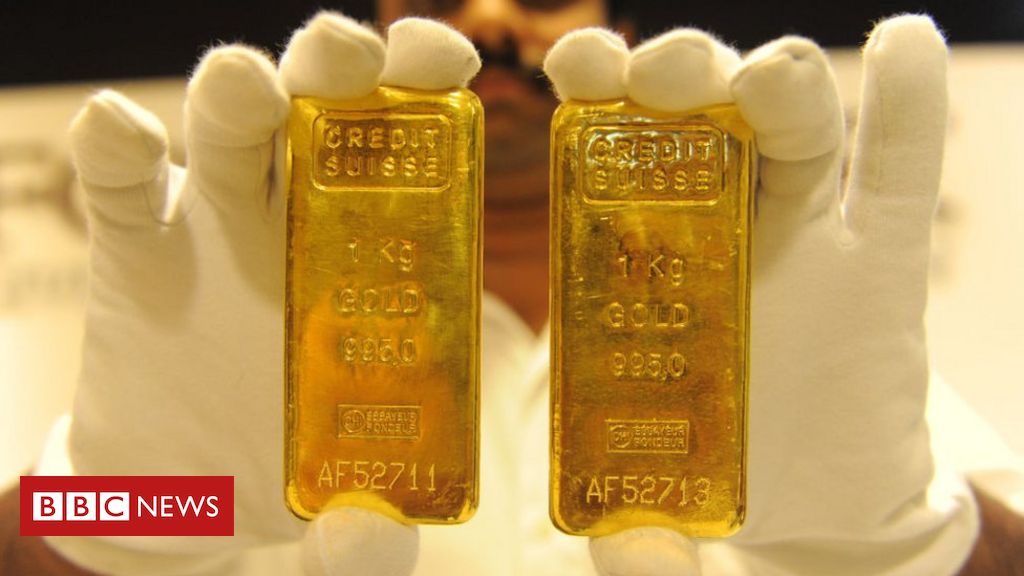 Gold prices have been rising, making it a reliable and popular asset

Indians are returning to one of their oldest assets amid a raging pandemic that was preceded by a banking crisis, reports the BBC’s Nidhi Rai.

To say Indians love gold would be an understatement. Over centuries, households – as well as temples – have hoarded the precious metal.

According to a World Gold Council estimate from last year, total gold reserves across Indian homes were about 25,000 tonnes – the largest in any country.

This time-tested investment has regained popularity as India’s economy reels from the devastating effects of a global pandemic. When Covid-19 struck, India’s $2.5tn (£1.9tn) economy was already sputtering because of a banking crisis.

One of the results has been a liquidity crunch, which has prompted many Indians to turn to gold as both investment and collateral.

And they are increasingly using it to raise funds, says commodity market expert Kunal Shah.

At a time when traditional bank loans are harder to come by, a hike in gold prices has helped fuel the popularity of these loans.

Gold plays a significant role in Indian life and culture

The leap in value is due to several reasons. For one, Western banks are printing currency and buying gold in the international market as long-term security. Two, stock markets around the world are volatile, spurring people to invest in gold, pushing its price up. And with interest rates in several countries in the negative territory, it’s unprofitable to keep money in banks.

All of this has affected the price of gold, with experts saying its value is set to rise further in coming months.

Disha Dinesh Parab, from the western city of Pune, is among those who have relied on gold loans to keep their businesses afloat during the pandemic. For the last 10 years, she has been making and selling about 40 to 50 boxes of food a day. But in recent months – due to low demand in a partially open economy – she’s had to slash her prices from $1 to 80 cents per lunch box and has only been able to sell a fourth of what she used to.

She says a gold loan was “the quickest and cheapest option available”.

Ms Parab pawned six pieces of gold jewellery for a gold loan from a local cooperative bank for $3,340. She is paying interest of 9.15% per year for three years. If she had opted for a personal loan, she would have had to pay a higher interest rate – just over 11% – for the same period.

Farmers too are looking at gold loans as a boost. Housilal Malviya, a farmer in the western state of Maharashtra, borrowed more than $5,000 against gold to start sowing in his farms.

“We tried taking a loan from the banks but they asked too many questions and were reluctant, but the local cooperative bank was ready to help [with a gold loan],” he says.

Gold and personal loans both allow a borrower to use the funds however they wish. But for many, gold loans are the more accessible of the two – they require fewer documents, gold is often easily available with the home as an asset, and the loans currently have a higher value due to high gold prices.

Lower interest rates for gold loans are an added advantage – currently, interest rates begin at just over 7% and go up to 29%, depending on the tenure and repayment options. In comparison, interest on personal loans ranges between 8% and 26% per annum.

Gold loans are slated to grow at a much faster rate compared to personal loans. “We expect them to grow by 10 to 15% this year,” says V P Nandakumar, CEO of Manappuram Finance, a non-banking finance company which specialises in gold lending.

Gold loans are also easier to access now as regular commercial banks have tightened their coffers. A history of bad lending decisions has left Indian banks with one of the world’s highest ratios of bad loans. And the pandemic only made things worse, leaving banks concerned whether more and more borrowers are likely to default. The result: banks are not lending as much as they used to.

In 2019, Indian banks approved 6% more loans than the previous year, according to domestic rating agency Crisil. This year, they’re expected to give just 1% more loans than usual – historically, the loan growth has been in double digits.

Indian banks have become cautious lenders amid the economic slowdown

“Small companies are coming to us because bank loans will take time. They need short-term working capital as the lockdown dried up all the payment streams,” says George Alexander Muthoot, managing director of Muthoot Finance, one of the largest gold loan companies in India.

Even regular banks that specialise in gold loans are reaping the benefits – Federal Bank and Indian Bank have seen a 10-fold rise in demand for gold loans, primarily in small cities and towns.

And experts predict that gold loans will continue to increase as prices go up. Before the lockdown in March, this price stood at $38 per gram – right now, it’s around $44 per gram. So a gold loan now would fetch nearly $7 more per gram than it did in March.