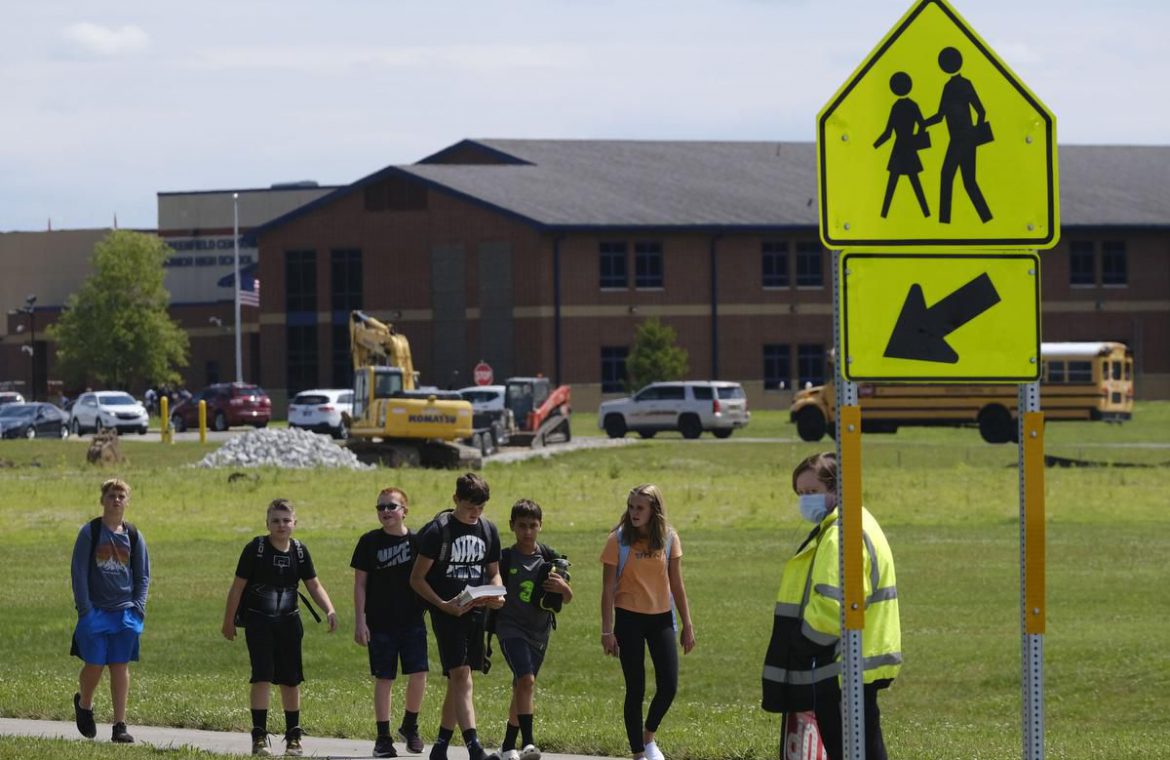 South Africa, with a population of about 58 million, has the fifth-highest number of reported cases in the world, behind the U.S., Brazil, Russia and India.

6:40 p.m.: The head of Mexico’s efforts to fight the coronavirus pandemic has sidestepped calls to resign after Mexico’s death count rose to overtake the United Kingdom as the third-highest in the world.

Assistant Health Secretary Hugo Lopez-Gatell said that “I express my respect” to the nine of Mexico’s 32 state governors who called for his resignation, adding “I hope we can continue to work together.”

On Saturday, Mexico reported yet another new daily high for confirmed cases — 9,556, which raised the total cases to almost 425,000. The country also posted 784 more confirmed COVID-19 deaths, raising its total to 47,472.

4 p.m.: The coronavirus forced MLB’s 17th postponement in 10 days on Saturday, prompting at least two more players to opt out and casting doubt the league can complete a truncated 2020 season.

A Cardinals-Brewers game in Milwaukee was postponed for the second straight day after one more player and several staff members with St. Louis tested positive for the coronavirus in rapid samples, Major League Baseball said. The staff total of positives was three, The Associated Press reported.

Milwaukee then announced that Gold Glove centre fielder Lorenzo Cain had opted out of the rest of the season.

The Miami Marlins, whose season is on hold after 19 cases, received no new positive results in their latest round of coronavirus testing, MLB said, but second baseman Isan Diaz also opted out. The Philadelphia Phillies, meanwhile, were permitted to access Citizens Bank Park for staggered workouts after their weekend series with the Blue Jays was postponed.

2:45 p.m.: Florida’s coronavirus report included 179 more resident deaths and 9,642 new COVID-19 cases, as the state kept away from the record-setting numbers of the past few days.

Health officials the previous day reported 257 deaths from disease complications, the most during the pandemic. These are fatalities that happened in recent weeks, but took time to confirm for the COVID-19 tally.

While the newly reported cases is a jump from the 9,007 infections listed on Friday’s report, it’s the seventh straight day of fewer than 10,000 cases.

2:30 p.m.: Just hours into the first day of classes, Greenfield Central Junior High School in Indiana got the news from the local health department: a student who had attended classes had tested positive for the coronavirus. Those who had come in close contact were ordered quarantined for 14 days.

“We knew it was a when, not if,” said Harold E. Olin, superintendent of the Greenfield-Central Community School Corporation told The New York Times about the reopening last Thursday.

However, he added, we were “very shocked it was on Day 1.”

It is unknown if any other students were infected, but the incident shows how schools need to be prepared amid the COVID-19 pandemic as they open their doors after prolonged shutdowns.

2 p.m.: Five months after the coronavirus outbreak engulfed New York City, riders are still staying away from public transportation in enormous numbers — but the picture emerging in major cities across the world suggests that public transportation may not be as risky as nervous New Yorkers believe.

In countries where the pandemic has ebbed, ridership has rebounded in far greater numbers than in New York City — yet there have been no notable superspreader events linked to mass transit, according to a survey of transportation agencies conducted by The New York Times.

Those findings could be evidence that subways, commuter railways and buses may not be a significant source of transmission, as long as riders wear masks and train cars or buses never become as intensely crowded as they did in pre-pandemic rush hours.

Ontario Health Minister Christine Elliott said that 28 of 34 public health units have five cases or less, and 16 have no new cases. In total, Ontario now has 39,209 confirmed cases, with 2,775 deaths.

“Hospitalizations continue to decline, with fewer patients in ICU and on ventilators today as well,” she said via Twitter.

Deaths in Canada from the novel coronavirus now total 8,935.

8 a.m.: In the beginning there was so much helplessness. A pandemic is by definition something that can be as big as the world; it was too much to comprehend, much less address. It reduced some people to the basics: What can I do to protect myself?

And for some, it pushed them to ask, what can I do to help? Before Hayley Wickenheiser, before Ryan Reynolds, before the prime minister, that’s what Conquer COVID-19 was.

If we remember one thing from this pandemic, let it be the extraordinary people behind Conquer COVID-19, Bruce Arthur writes. Read the full story here.

7:16 a.m.: China reported a more than 50 per cent drop in new cases of COVID-19 on Saturday in a possible sign that its latest major outbreak in the northwestern region of Xinjiang may be waning.

The 45 new cases over the past 24 hours, 31 of them in Xinjiang, where the outbreak has been focused on the regional capital Urumqi, is down from 127 cases nationally on Friday, including 112 in Xinjiang.

The National Health Commission on Saturday also reported eight new cases in the northeastern province of Liaoning, where officials in the port city of Dalian have collected nucleic acid tests on more than 4 million people.

Tokyo Gov. Yuriko Koike issued a warning in an online video, urging people to wash their hands, wear masks and visit those businesses that display the special city-backed stickers with the image of a rainbow, which indicates good social distancing.

Most people getting sick were in their 20s and 30s, highlighting how they may be putting their guard down and going out partying, according to officials. Nationwide, the daily count of coronavirus cases in Japan totalled a record 1,579 on Friday.

7:04 a.m.: The Australian state of Victoria has recorded three more deaths from the coronavirus and 397 additional cases, a significant drop from this week’s high.

Victoria Premier Daniel Andrews said he understood the latest deaths were linked to aged care, where 1,008 cases are currently active. They take the national death toll to 201, including 116 in Victoria.

Authorities warned that many of those infected were failing to self-isolate at home. Andrews said he was looking at whether there needed to be changes in fines for people who have tested positive but were not at home when military personnel and public health officials came knocking.

6:50 a.m.: India recorded the steepest spike of 57,118 new cases in the past 24 hours, taking its coronavirus caseload close to 1.7 million, with July alone accounting for nearly 1.1 million infections.

The Health Ministry on Saturday also reported 764 additional deaths for a total of 36,511. India’s Civil Aviation Ministry delayed resumption of international flights by another month until Aug. 31. But it will continue to allow several international carriers from the United States, Europe and the Middle East to operate special flights to evacuate stranded nationals.

4 a.m.: South Korean prosecutors arrested the elderly leader of a secretive religious sect Saturday as part of an investigation into allegations that the church hampered the government’s anti-virus response after thousands of worshippers were infected in February and March.

Prosecutors in the central city of Suwaon have been questioning 88-year-old Lee Man-hee, chairman of the Shincheonji Church of Jesus, over charges that the church hid some members and under-reported gatherings to avoid broader quarantines.

The Suwon District Court early Saturday granted prosecutors’ request to arrest Lee over concerns that he could temper with evidence.

Lee and his church have steadfastly denied the accusations, saying they’re co-operating with health authorities. Its spokesperson, Kim Young-eun, said the church will do its best so that “the truth is clearly proved in court.”

More than 5,200 of the South Korea’s 14,336 COVID-19 cases have been linked to the church so far. Its branch in the southern city of Daegu emerged as the biggest cluster after infections spiked in late February.

1 a.m.: Mexico now has the third most COVID-19 deaths in the world, behind the United States and Brazil, while former success story Vietnam is struggling to control an outbreak spreading in its most famous beach resort.

Mexican health officials on Friday reported 688 new deaths, pushing the country’s total to 46,688. That put Mexico just ahead of the United Kingdom, which has 46,119, according to the tally by Johns Hopkins University.

In Vietnam, a third person died of coronavirus complications, officials said Saturday, a day after it recorded its first-ever death as it struggles with a renewed outbreak after 99 days with no local cases.

All three died in a hospital in Da Nang, a hot spot with more than 100 cases in the past week. Thousands of visitors had been in the city for summer vacation and are now being tested in Hanoi and elsewhere.

Friday 5 p.m. Ontario’s regional health units are reporting a total of 41,303 confirmed or probable cases of COVID-19, including 2,811 deaths, an increase of 114 new infections in 24 hours.

The province-wide case growth was dominated by increases in three health units Friday: There were 26 new reported infections in Ottawa, 21 in Windsor-Essex, and 20 in Toronto.

Still, July is ending with the province at its lowest rate of new infections since well before the pandemic first peaked in Ontario in the spring — at 116 cases per day over the last seven days.

The Star’s count includes some patients reported as “probable” COVID-19 cases. This means they have symptoms and contacts or travel history that indicate they very likely have the disease, but have not yet received a positive lab test.

The province cautions its separate data, published daily at 10:30 a.m., may be incomplete or out of date due to delays in the reporting system. In the event of a discrepancy, “data reported by (the health units) should be considered the most up to date.”

Don't Miss it Coronavirus doctor’s diary: How gardening could help in the fight against obesity
Up Next Lions place QB Matthew Stafford on reserve/COVID-19 list