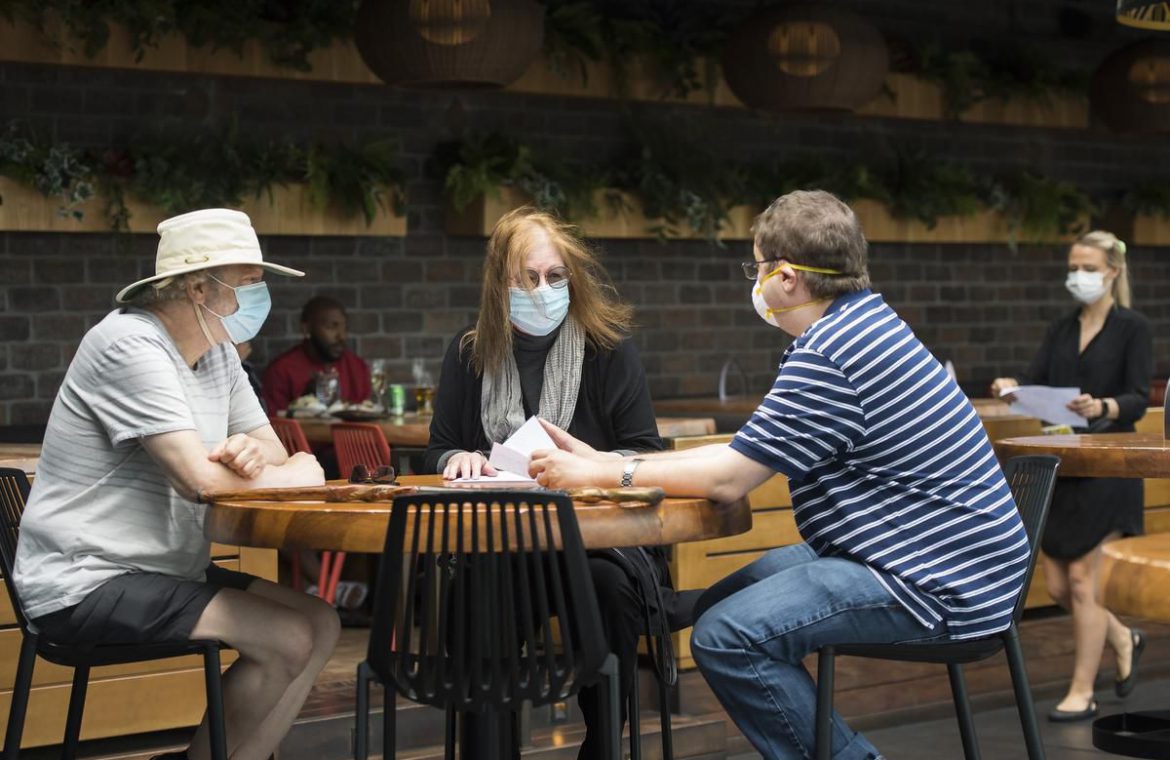 3:30 p.m.: Quebec reported 141 new COVID-19 cases and three more deaths linked to the novel coronavirus on Sunday as it gets ready to increase public gathering limits.

The province is set to permit indoor and outdoor public gatherings of up to 250 people beginning Monday, up from 50. But a 10-person limit will be maintained for private gatherings, such as in homes and chalets.

Health authorities added three deaths on Sunday — including two which occurred before July 25.

Quebec continues to have Canada’s highest COVID-19 death tally with 5,681 reported since the beginning of the pandemic.

Hospitalizations dropped by five to 172, while the number of patients in intensive care stood at 17, a decrease of one.

One day after setting a record with 18,437 tests performed on July 30, the province reported 14,934 tests completed on Friday — the last day for which those figures were available.

1:15 p.m.: Nova Scotia is now reporting two new cases of COVID-19, both related to travel outside of Canada.

Both cases are in the central zone, which includes Halifax, and are in self-isolation.

The province now has four active cases — all travel-related — but no one is in hospital due to the virus.

A mandatory mask rule came into effect Friday in most indoor public spaces across the province, including businesses and places of worship.

Dr. Robert Strang, the chief medical officer of health, said the measure is necessary to minimize any potential second wave of COVID-19.

12:15 p.m.: As COVID-19 restrictions ease and restaurants start to welcome customers back, one thing Canadians may soon have to get used to is providing their personal information before they grab a bite.

Guidelines for restaurants vary in each province. But some jurisdictions are requiring a customer’s name and phone number or email address, along with their table number, to help with contract tracing in the event of an outbreak.

Ontario announced Friday that it will require bars and restaurants to keep client logs for 30 days. These will have to be disclosed to the medical officer of health or an inspector if tracing is needed.

In Toronto, collecting the info can be done at the time of reservations or through another system, said Toronto Public Health spokesperson Vinita Dubey.

She said indoor bars and restaurants present a higher level of risk for COVID-19 transmission because they involve crowds, close contact and closed spaces.

Similar guidelines apply to restaurants and bars in British Columbia, where public health officials now require restaurants to collect personal information from customers when they make reservations or at the time of seating. The details also have to be kept for a month.

Restaurants Canada vice-president David Lefebvre said there are costs associated with collecting personal details. And it can be time-consuming for places that provide quick service to a lot of customers.

“Our position as an association on this is: let’s make sure everybody, as a recommendation, respect the public health requirements,” he said. “But at the same time, let’s make sure that it’s not something that becomes too onerous and costs too much.”

Health Minister Christine Elliott said that represents a 0.3 per cent increase “as the province once again processed over 30,000 tests. Locally, 27 of 34 public health units are reporting five or fewer cases, with 16 of them reporting no new cases. There are 122 more resolved.”

She also tweeted that “hospitalizations, ICU admissions and patients (on ventilators) all remain largely stable today” and noted that the next update on coronavirus numbers will come Tuesday, because of the holiday on Monday.

9:31 a.m.: Toronto has been in the coronavirus’s grip for just over six months, though it may feel like a lifetime. The path of the virus has twisted wildly: nearly every month has brought a new upheaval.

In July, Toronto Public Health released an important dataset: a catalogue of every case reported in the city since the first known case in late January, roughly 15,300 total. Identifying details have been removed to protect privacy, but each case includes the person’s age bracket, neighbourhood and source of infection; whether they were hospitalized, in critical care or intubated; whether they recovered, are still fighting infection, and more.

You might think you know the story of COVID-19 and Toronto. But the dataset, which TPH says it released in the interest of transparency, contains revelations about how the virus slipped into Toronto and gained a foothold before taking aim at the most vulnerable residents and neighbourhoods.

Read the Star’s analysis of this trove of information and full story here.

7:15 a.m.: Coronavirus outbreaks at mink farms in Spain and the Netherlands have scientists digging into how the animals got infected and if they can spread it to people.

In the meantime, authorities have killed more than 1 million minks at breeding farms in both countries as a precaution.

The virus that first infected people in China late last year came from an animal source, probably bats, and later spread from person to person, as other coronaviruses had done in the past. Some animals, including cats, tigers and dogs, have picked up the new coronavirus from people, but there hasn’t been a documented case of animals spreading it back to humans.

The outbreaks among the minks on the farms in the Netherlands and Spain likely started with infected workers, although officials aren’t certain. But it also is “plausible” that some workers later caught the virus back from the minks, the Dutch government and a researcher said, and scientists are exploring whether that was the case and how much of a threat such a spread might be.

7:10 a.m.: Confirmed coronavirus cases are hovering at near record levels in Japan, raising worries the pandemic may be growing more difficult to control.

The Tokyo government reported 292 new cases Sunday, about half in their 20s. Japan in total reported 1,540 cases on Saturday— the second straight day the number was above 1,500.

Nationwide cases for Sunday will be tallied at midnight. Numbers are usually fewer over the weekend because of fewer tests. Japan has avoided a total lockdown, encouraging business activity while urging people to wear masks, social distance and work from home.

7:02 a.m.: Coronavirus infections in the Philippines surged past 100,000 Sunday after medical groups declared that the country was waging “a losing battle” against the virus and asked the president to reimpose a lockdown in the capital.

The Department of Health reported a record-high daily tally of 5,032, bringing the total confirmed cases in the country to 103,185, including more than 2,000 deaths.

The Philippines has the second-most cases in Southeast Asia after Indonesia. President Rodrigo Duterte eased a tough virus lockdown in the capital, Manila, on June 1.

The Health Ministry on Sunday also reported 853 deaths for a total of 37,364. Randeep Guleria, a top government expert, said that New Delhi and Mumbai may have crossed their peak levels with declining trends.

The month of July alone has accounted for more than 1.1 million cases in India. Health Minister Harsh Vardhan said the case fatality rate is progressively reducing and currently stands at 2.18%, one of the lowest globally.

6:50 a.m.: The premier of Australia’s hard-hit Victoria state has declared a disaster among sweeping new coronavirus restrictions across Melbourne and elsewhere from Sunday night.

An evening curfew will be implemented across Melbourne from 8 p.m. to 5 a.m. Premier Daniel Andrews says the state of disaster proclamation gave police greater power.

He says 671 new coronavirus cases had been detected since Saturday, including seven deaths. It comes among a steadily increasing toll in both deaths and infections over the past six weeks in Victoria.

“If we don’t make these changes, we’re not going to get through this,” Andrews said. “We need to do more. That is what these decisions are about.”

He said there would be more announcements about workplaces on Monday, including the closure of certain industries.

Melbourne residents will only be allowed to shop and exercise within 5 kilometres (3 miles) of their homes. All students across the state will return to home-based learning and child care centres will be closed.

5:15 a.m.: Early bands of heavy rain from Isaias lashed Florida’s east coast before dawn Sunday as authorities warily eyed the approaching storm, which threatened to snarl efforts to quell surging cases of the coronavirus across the region.

Isaias weakened from a hurricane to a tropical storm late Saturday afternoon, but was still expected to bring heavy rain and flooding as it barrels toward Florida.

“Don’t be fooled by the downgrade,” Florida Gov. Ron DeSantis warned during a news conference on Saturday after the storm — pronounced ees-ah-EE-ahs — spent hours roughing up the Bahamas.

Florida authorities closed beaches, parks and virus testing sites, lashing signs to palm trees so they wouldn’t blow away. The governor said the state is anticipating power outages and asked residents to have a week’s supply of water, food and medicine on hand. Officials wrestled with how to prepare shelters where people can seek refuge from the storm if necessary, while safely social distancing to prevent the spread of the virus.

South Africa, with a population of about 58 million, has the fifth-highest number of reported cases in the world, behind the U.S., Brazil, Russia and India.

Saturday 6:40 p.m.: The head of Mexico’s efforts to fight the coronavirus pandemic has sidestepped calls to resign after Mexico’s death count rose to overtake the United Kingdom as the third-highest in the world.

Assistant Health Secretary Hugo Lopez-Gatell said that “I express my respect” to the nine of Mexico’s 32 state governors who called for his resignation, adding “I hope we can continue to work together.”

On Saturday, Mexico reported yet another new daily high for confirmed cases — 9,556, which raised the total cases to almost 425,000. The country also posted 784 more confirmed COVID-19 deaths, raising its total to 47,472.