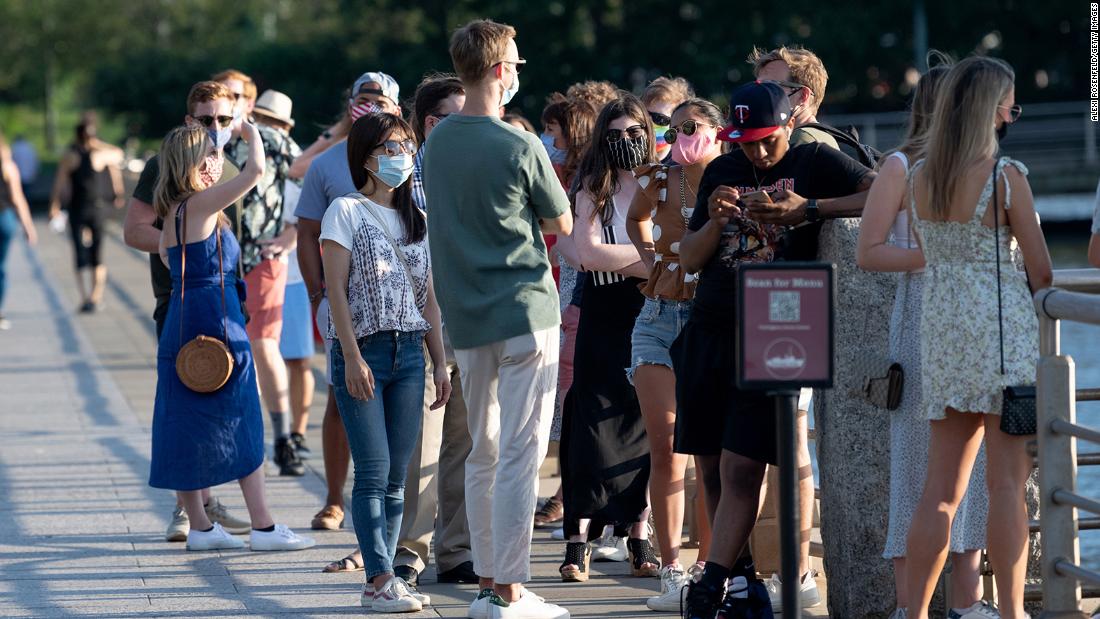 So far, more than 4.6 million Americans have been infected and at least 154,859 have died, according to Johns Hopkins University data. And the country’s death toll is now projected to reach at least 173,000 by August 22, according to a new composite forecast from the US Centers for Disease Control and Prevention

To combat the rampant spread of the virus, health officials have worked with state leaders to provide tailored responses that combat the outbreak in each community, Birx said, adding that some mitigation efforts have begun to show positive results.

“But I want to be very clear,” she said. “What we are seeing today is different from March and April. It is extraordinarily widespread. So everybody who lives in a rural area, you are not immune or protected from this virus and that is why we keep saying, no matter where you live in America, you need to wear a mask and socially distance.”

The recommendations from health officials have remained the same for months — yet despite a continuing climb in coronavirus cases, some Americans are still opting to attend large social gatherings, and refuse to wear face coverings.

There need to be stricter measures and — in some communities — another round of stay-at-home orders, said Dr. James Phillips, a physician and assistant professor at George Washington University Hospital.

“I’m concerned that the complacency that we’ve seen with coronavirus has led to these mass gatherings and a general disagreement with the science,” he said. “People aren’t wearing masks, they aren’t distancing.”

At least 30 states have paused their reopening plans or imposed new restrictions to combat a rise in cases, and at least 39 states have some kind of mask order in place. But the efforts to slow the spread come as some parts of the country are preparing to welcome students back to schools and college campuses.

“What I’m concerned about primarily is the fact that we haven’t controlled this virus in a serious way, we’re seeing rises in a lot of states and now we’re talking about reopening schools and colleges in the midst of that which I think is going to compound our problem significantly,” Phillips said.

As one school district reopens, 260 employees infected or exposed

In Gwinnett County, Georgia, where dozens protested a return to school last week, at least 260 Gwinnett County Public School employees tested positive for the virus or were in contact with a case, a spokeswoman for the district told CNN Sunday.

That announcement came days after teachers returned to class for in-person pre-planning, CNN affiliate WSB reported.And in one Indiana school district that reopened for the new year, a student tested positive on the first day of class, prompting school officials to isolate the child and begin tracking who may have come into close contact.

School reopenings will have to be done carefully, Birx said, and areas that have reported a rise of infections should first stop cases before engaging in talks about welcome students back to class.

In late July, the CDC issued new guidelines that came down hard in favor of reopening schools. The guidelines said children don’t suffer much from coronavirus but suffer from being out of school. The CDC recommended local officials consider closing schools or keeping them closed if there is substantial, uncontrolled transmission of the virus. The guidelines also said children are less likely to spread the virus than adults — but new studies suggest children can contribute to its transmission.

In Miami-Dade County, dubbed by some experts as the country’s epicenter, the superintendent announced Sunday students will continue virtual learning until at least October.

The superintendent told CNN affiliate WPLG there’s a possibility that some groups of students could return before October, including kindergarten students and children with disabilities, saying there should be a balance between protection and the “resumption of normalcy.”

However many restrictions and guidelines officials put in place, it will be the public’s help in heeding those guidelines that will help drive coronavirus numbers down, Birx said.

“If we are still going to parties at home, even though the bars are closed, if we are creating interactions where we know it’s not safe, because there’s multiple people there, and you don’t have masks on and you’re not socially distanced, you can assume it’s not super spreading individuals,” she said. “It’s super spreading events, and we need to stop those.”

Birx has said experts are noticing a pattern of younger Americans often bringing the infection back home without knowing it — as many go through the virus without any symptoms — and then pass it on to their parents who then spread it to grandparents or other older residents.

In Philadelphia, police encountered a gathering of more than 500 people Saturday, police told CNN. In California, dozens of Los Angeles bar-goers crowded indoors for a celebration that one bar spokesperson said was supposed to honor first responders. In New Jersey, officials are investigating a teen party that led to a coronavirus cluster last month.

And over the weekend, Birx highlighted one more way Americans are bringing the virus home: By vacationing at hotspots.

“If you have chosen to go on vacation into a hot spot, you really need to come back and protect those with comorbidities and assume you’re infected,” she said.

More importantly, she said, people who live in multigenerational households in areas that are experiencing outbreaks, should consider wearing masks at home and assume that they are positive if they are living with people who are older or who may have underlying conditions that put them at higher risk for coronavirus complications.

Don't Miss it Coronavirus live news: Singapore to use electronic tags to monitor some travellers; Belgium ICU admissions double | World news
Up Next Coronavirus recovery deal: Can the EU rebound? | To the point