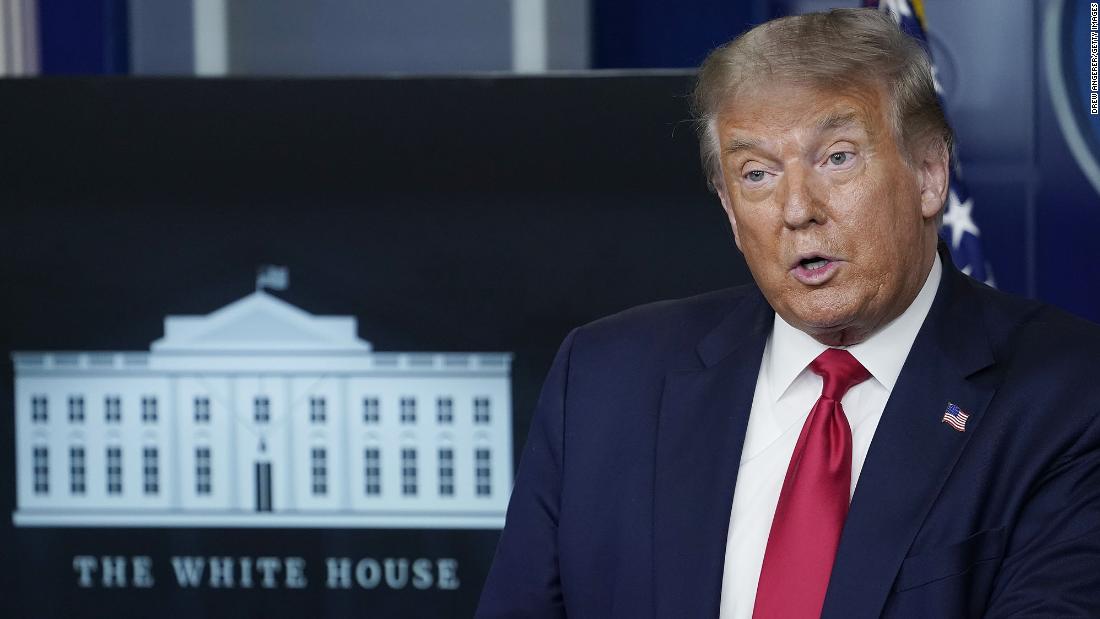 “It’s been a total disaster. They have — they’re six weeks into it now, they have no clue what’s going on. And I mean I think I can say right here and now, I think you have to rerun that race because it’s a mess. Nobody knows what’s happening with the ballots and the lost ballots and the fraudulent ballots, I guess,” Trump said. He said a bit later that “there’s fraudulent ballots,” this time omitting the “I guess.”

Facts First: There has been no evidence to date of fraudulent voting in the New York primaries, much less the kind of widespread voter fraud Trump has wrongly insisted is a common feature of mail-in voting. Rather, New York’s counting has been slow because the state has had administrative problems — ranging from insufficient staffing to outdated technology — in trying to count a much larger than usual number of absentee votes. Patel, Maloney and many others have expressed concern about how many absentee ballots may be rejected in the New York races. But rejections occur for all sorts of reasons other than fraud, such as a voter forgetting to include their signature or mailing their ballot too late.

Not for the first time, Trump implied absentee ballots were significantly different from mail-in ballots.

“Absentee ballots are great. Absentee ballots, they have to request them, they go through a process, they get them,” Trump said Monday. “But the universal mail-in ballots have turned out to be a disaster.”

Facts First: Trump often defends absentee voting — a practice he has used himself — while lambasting mail-in voting. But the voting methods are very similar, and experts have told CNN they are largely “the same thing.” And although there can be some differences in the methods used to implement absentee and mail-in voting, experts say that they are both secure ways of voting.

“The bottom line is that absentee and mail balloting are secure in America,” Wendy Weiser, the director of the Democracy Program at the Brennan Center, told CNN. “Election officials, Republicans and Democrats alike, pretty much universally are confident in the system.”

When asked if he would consider signing an executive order (in the reporter’s words) “addressing mail-in ballots” Trump said he had the “right to do it.”

Facts First: It’s unclear what sort of order Trump believes he has the right to issue on mail-in ballots but the Constitution does not give the President authority over voting methods. That authority rests in the states.

Each state maintains jurisdiction over establishing rules over administering elections there, whether it’s rules around mail-in voting, proof of identification, and so on. And while Congress and states often fight over that authority, leading to lawsuits and Supreme Court decisions, the President has no authority to issue an order regarding mail-in voting.  As Steve Vladeck, a legal analyst for CNN and professor at the University of Texas law school, noted on Twitter, “The President has no power—none—to change individual *state* rules regarding mail-in voting by Executive Order.”

The US Postal Service

The President also suggested the US Postal Service was unprepared to handle an influx of mail-in ballots that are expected later this year.

Facts First: Trump is directly refuting the comments of his own US Postal Service here, which said in a statement released Monday that it had the capacity to handle the additional volume of election-related mail.

“The Postal Service has ample capacity to adjust our nationwide processing and delivery network to meet projected Election and Political Mail volume, including any additional volume that may result as a response to the COVID-19 pandemic,” the agency said in the statement which came after a tweet earlier on Monday where the President questioned the post office’s ability to process an increased amount of mail. Despite that, there are legitimate concerns over the ability of the USPS to handle what is expected to be a large influx in mail-in ballots. Thousands of voters did not receive their mail-in ballots during state primaries earlier this year. The Postal Service is facing chronic funding shortages, which the President has not taken steps to alleviate given his belief their prices for packages are too high. Under the leadership of the new postmaster general, Trump loyalist Louis DeJoy, USPS is witnessing delays for mail delivery in a few places, prompting fears that some ballots may not reach election offices in time if the problems aren’t corrected by November. You can read more about the context behind the President’s attacks on USPS here.

Trump claimed that there was a decline in prescription drug prices “last year.” He claimed this was the first such decline in “51 years.”

Facts First: Trump has it wrong. While prescription drug prices did decline slightly in 2018 — using one particular, limited measure, the Consumer Price Index — they increased by about 3% in 2019 using that same measure. In addition, the 2018 decline was the first in 46 years, not 51.

Trump started making versions of this claim in 2019, when “last year” was correct. But he is now touting an outdated statistic that makes the 2019 situation sound better than it was.

Experts say the Consumer Price Index has shortcomings as a way to measure what is really happening with drug prices, and other sources of data showed an increase both years. You can read a longer fact check here.

In touting his administration’s response to the pandemic, Trump suggested that frontline workers have all the supplies they need. Trump said that hospitals, states and nursing homes “are very much stocked up” when it comes to personal protective equipment. “They’re in great shape,” the President added.

Facts First: Hospitals and health care professionals have continued to report low levels of PPE this summer as cases of the virus surged throughout the US.

In a survey of nurses by the National Nurses United, the largest nurse union in the US, 87% of nurses in hospitals “reported reusing at least one piece of single-use PPE” as of July 27. The organization GetUsPPE has delivered over 2 million units of donated PPE but still has 13,000 unfulfilled requests for PPE. According to a July 14 CNN report, part of the reason for the current shortage is that the Trump administration made sparing use of the Defense Production Act earlier this year to compel private companies to manufacture equipment for the pandemic. Only about half of the 600 million N95 respirators and face masks that were being manufactured under DPA contracts are expected to be delivered by the end of the year. The New York Times reported on July 8, medical staff at Florida’s St. Petersburg General Hospital were only given one surgical mask per day for their rounds.

“If you sneeze in your mask, you still have to wear it your entire shift,” said Barbara Murray, a nurse at the hospital told the Times. A spokeswoman for St. Petersburg General declined to comment on the hospital’s mask policies but told the New York Times that adequate supplies were available to employees who needed them.

These are just a few examples of the ongoing struggle to secure enough PPE to care for patients. It’s not true that all hospitals and other caregiving facilities are “in great shape” when it comes to their supply of PPE.

The pandemic in the US and other countries

Trump was asked about his Monday tweet criticizing Dr. Deborah Birx, the White House coronavirus task force coordinator, after she warned in a CNN interview on Sunday about how widespread the virus has become in the US.

Trump responded, “I think we’re doing very well. And I think that we have done as well as any nation — if you really look, if you take a look at what’s going on, especially now with all these flare-ups” in countries where the virus appeared to have been suppressed.

Facts First: We give Trump wide latitude to express opinions, but it’s simply ridiculous to claim that the US has done as well as “any nation.” Numerous countries have kept their numbers of coronavirus cases and deaths far below the US numbers, whether in absolute terms or per capita. And some countries that have been praised for their response to the virus are indeed having “flare-ups,” but those flare-ups pale in comparison to the ongoing US crisis.

For example, there is no basis on which to claim the US has done even close to as well as South Korea in managing the pandemic. South Korea, with a population of about 52 million, had recorded 14,389 cases and 301 deaths as of Monday compared to more than 4.7 million cases and 155,379 deaths in the US, which has a population of about 330 million.Germany, another country that has been lauded for its handling of the crisis, has experienced a recent spike in the number of newly reported cases. With a population of about 83 million, it reported 955 new cases and seven new deaths on Friday. Germany had fewer than 500 new cases per day earlier in July, so the increase is certainly a concern — but on the same Friday, the US had 67,023 new cases and 1,259 new deaths, according to Johns Hopkins University data.