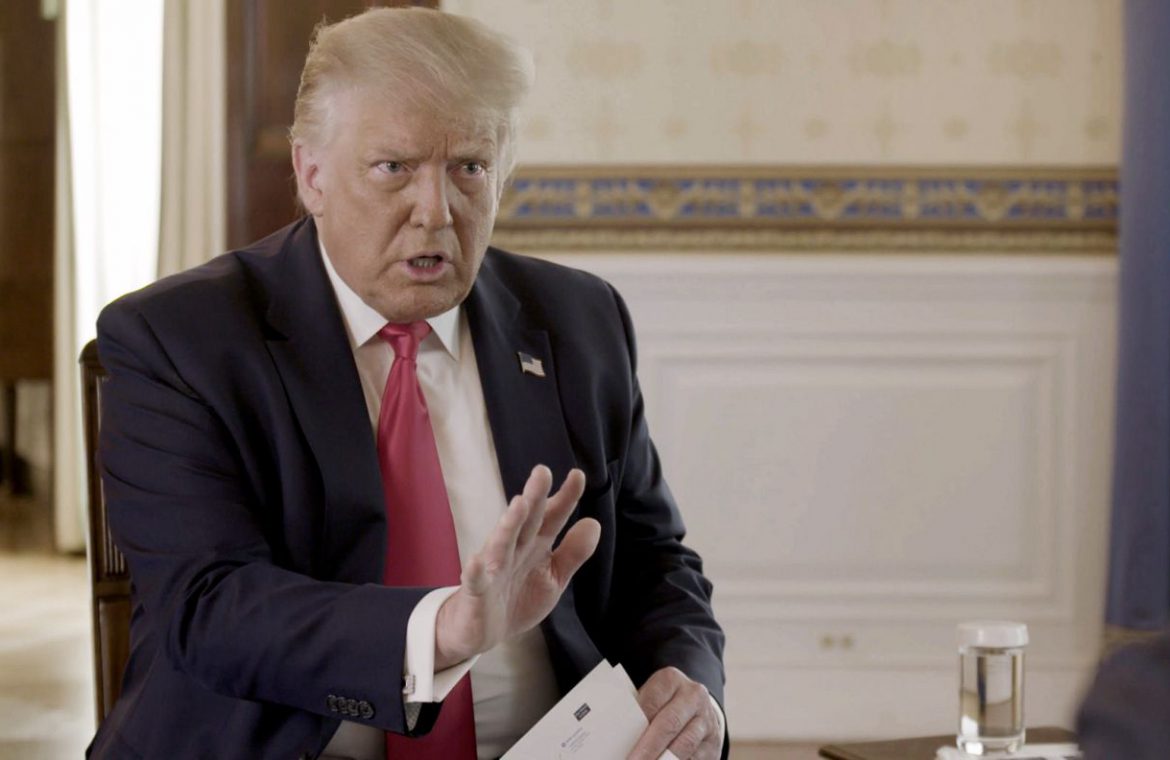 President Donald Trump said his administration has done an “incredible” job handling the coronavirus pandemic and that despite rising deaths the outbreak is “under control,” in a wide-ranging and contentious interview that aired on HBO Monday night.

Axios National Political Correspondent Jonathan Swan began the interview by asking Trump if his sometimes “wishful thinking” and “salesmanship” was suitable in a crisis that has killed more than 155,000 people in the U.S.

“I think you have to have a positive outlook, otherwise you would have nothing,” Trump said. As he frequently has done in defending his record on the pandemic, the president pointed to the travel restrictions he imposed on China and Europe, arguing hundreds of thousands – a number he later put in the “millions” – more would have died without those actions. He added that even one death was too many.

“Who says that?” Swan asked, but Trump continued to talk about the China travel ban. Swan pointed out that the virus was already in the U.S. by the time Trump issued the ban. Experts have said there isn’t enough data to conclude the restrictions made a significant difference. A study in the journal Science found the various travel limitations across the globe helped slow the spread of the pandemic but more was needed to contain it.

“Well, it’s here now, and you’re the president,” Swan said at another point when Trump blamed China for failing to stop the virus.

Swan pressed Trump on whether his positive spin on outbreak – telling people the outbreak is under control and not to worry about wearing masks – could be putting people in danger by “giving them a false sense of security.”

“I’ve covered you for a long time. I’ve gone to your rallies. I’ve talked to your people. They love you. They listen to you,” Swan said. “They don’t listen to me, or the media or (Dr. Anthony) Fauci. They think we’re fake news. They want to get their advice from you.”

“Many of them are older people, Mr. President,” Swan added.

Trump responded to that criticism by saying he thinks the outbreak is “under control.” Swan asked how he could say that as the average number of daily deaths had climbed back up to over 1,000.

“They are dying, that’s true. And it is what it is,” Trump said. “But that doesn’t mean we aren’t doing everything we can. It’s under control, as much as you can control it.”

‘You can’t do that’: Trump pushes back on data

When Swan cited rising deaths from COVID-19 in the U.S., Trump argued that in comparison to other nations, the U.S. had handled the virus well. The president produced a chart he said showed the U.S. was lower in the number of deaths per confirmed cases, though it only appeared to compare four data points.

The U.S. does have a lower percentage of deaths per confirmed cases than several nations, including most members of the European Union. But the rate in the U.S. is higher than 98 other nations, including Australia, Japan and South Korea, according to data compiled by Statista.

Swan said he was referring to death as a proportion of population, where only six countries have fared worse than the U.S., which leads the world in total deaths from the coronavirus.

Swan pointed to South Korea, which has only had 301 coronavirus death.

“I won’t get into that because I have a very good relationship with the country,” Trump said.

Trump claims some ‘say you can test too much,’ but won’t specify who

Trump repeated his unfound claim that the high number of cases in the U.S. was due to the high rate of testing – though Swan argued many other nations did not have to test as much because they had the virus better contained, and that testing was not to blame for the rising number of hospitalizations and deaths.

“You know there are those that say you can test too much. You do know that,” Trump said.

“Who says that?’ Swan asked.

The president never specified what experts or materials he was referring to.

Trump conceded that in some places test results were not available quickly enough. He said the aim was to have all Americans have access to the kind of same-day results that are available to the White House now, though he could not say when he thought that would be accomplished.

The president defended a fizzled attempt to restart campaign events in June in Tulsa, Oklahoma, where he held his first and only rally since in the months since the coronavirus crisis unfolded.

The June 20 rally at Tulsa’s BOK Center, which holds 19,000 people, drew an underwhelming crowd of 6,200 amid ongoing concerns over a spike in coronavirus cases across the state.

The Trump campaign blamed low turnout on protesters outside of the arena, but USA TODAY journalists reporting at the rally did not witness any demonstrations that blocked the highly secured entrances.

Trump appeared to suggest he canceled a New Hampshire rally on July 12 over coronavirus concerns. But his campaign had initially cited weather concerns related to Tropical Storm Fay when it abruptly scrapped plans for the highly anticipated Portsmouth rally.

“We were going to have a great crowd in New Hampshire and I canceled it for the same reason,” Trump told Swan, who had twice referred to the decision to cancel the planned Republican National Convention in Jacksonville, Florida, due to the outbreak.

The president tweeted a day before the canceled event that he was “forced to reschedule” rally over the storm, raising questions about whether the campaign was concerned about crowd size.

Both New Hampshire and Oklahoma health officials warned residents against attending Trump rallies over fear of spreading the virus.

Trump defended his decision to hold the Tulsa rally, telling Swan he selected the city because it “was a very good area at the time.”

Local health officials had called for the rally to be postponed out of concern about the spread of the virus due to a local surge in cases. Tulsa’s top health department official said last month that Trump’s rally, along with protests at the time, “more than likely” contributed to another uptick in cases.

Trump on John Lewis’ legacy: ‘He didn’t come to my inauguration’

Later in the interview, Trump declined to praise the late civil rights icon John Lewis, who died last month from pancreatic cancer, as his three predecessors did at the Democratic congressman’s funeral.

Swan asked Trump how he thought history will remember Lewis, a leading member of the civil rights movement who was jailed and endured police beatings, spoke at the historic March on Washington and was a member of the original Freedom Riders.

“I don’t know. I don’t know John Lewis. He chose not to come to my inauguration,” Trump said. “I never met John Lewis, actually, I don’t believe.”

Lewis skipped Trump’s inauguration in 2017, arguing that he didn’t see him as a “legitimate” president because of Russian interference in the 2016 election. He also refused to attend events with Trump including the dedication of a civil rights museum in Mississippi.

The interview took place last week while Lewis was lying in state at the Capitol, where Republicans and Democrats alike paid tribute to the congressman’s three decades of service and his fight against discrimination and segregation of Black Americans. Former presidents George W. Bush, Bill Clinton and Barack Obama delivered remarks at his funeral in Atlanta. Trump did not pay his respects at the Capitol nor did he attend Lewis’s funeral.

The president shrugged off the civil rights icon’s record when asked if he found him impressive.

“I can’t say one way or the other. I find a lot of people impressive. I find many people not impressive, but no, he didn’t come to my inauguration,” he said. “He should’ve come. I think he made a big mistake.”

When pressed to put the pair’s strained relationship aside and offer his thoughts on Lewis’ legacy, Trump relented: “He was a person that devoted a lot of time and a lot of heart to the civil rights. But there were many others, also.”

Trump again claimed during the interview that he’s done more for Black Americans than any president, including Lyndon B. Johnson, who passed the Civil Rights Act in 1964.

The president, however, said he had “no objection” to a call to rename the Edmund Pettus Bridge in Selma, where Lewis marched with voting rights activist in 1965, after the Georgia congressman.

This article originally appeared on USA TODAY: Trump tells Axios rising COVID-19 death toll ‘is what it is’